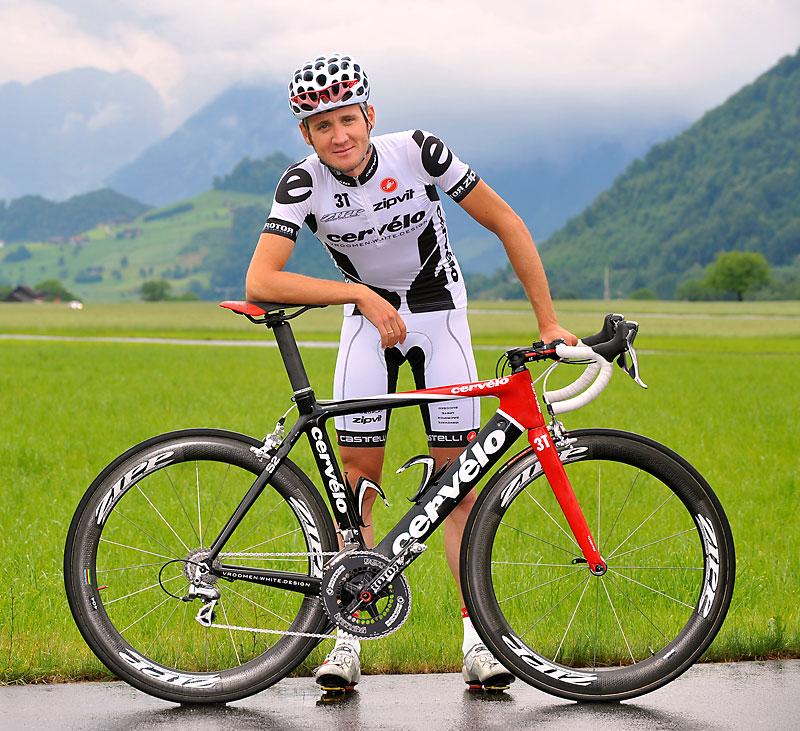 Can a jersey save you 10W of effort? Castelli say it can...
by dave atkinson

In the world of jerseys, black has become white. Whether that's because Castelli's new updated aero techonology has rewritten the rules, or just because Cervelo's strip is now light as opposed to dark, we'll have to wait and see. But Castelli are making grand claims for their new top, the headline one being that it'll save a rider 10W of energy over the last incarnation, which itself claimed to be 9W more efficient than their standard kit.

Are these meaningful numbers? Well, the 10W quoted (at 40km/h) would be enough to slice half a minute from a 40km time trial, so it's clearly an advantage if it works. You only have to look at the secrecy surrounding Team GB's Beijing skinsuits to see that teams recognise that a change of clothing can give you a boost: two thirds of the drag from a cyclist comes from the rider, not the bike.

As to how the savings are achieved, well Castelli are a little vague on the details as you might expect. They claim that it "features new fabrics around the arm and shoulder making it even more aerodynamic" and there's a bit of photographic evidence of this (above); presumably the rest of the grament is made from the "aero slippery" and dimpled fabrics they've been developing since 2006.

And the change from black to white? Well, any schoolboy scientist will tell you that black absorbs heat while white reflects it, and that'll certainly help on those sunny alpine climbs. “We made the design change because racing during the hot summer temperatures that are normal in Europe is hard on the riders,” said Thomas Campana, Managing Director of Cervélo Test Team, “and the lighter colour will provide some relief from the heat. All modifications to team kit design must be approved by the UCI and we appreciate their prompt attention in this matter.” This does kind of beg the question as to why it wasn't white in the first place, but we're sure there was a good reason and it's nothing to do with having two different looking jerseys to sell, rather than two that look almost identical...

If you're looking for that extra edge on the local club run then you should be able to get your fix soon: The gear will begin shipping to the shops before the beginning of the Tour de France (so now then, presumably) and the black kit is still in stock if black's your thing.