4ZA have launched a range of wheels to complement the handlebars, stems, saddles and seat posts they already recently introduced. Like the other parts, the new wheels come in a hierarchy described as "good, better and best" or Stratos, Cirrus and Cirrus Pro as code for the intended performance and price.

We posted about 4ZA  - or Forza as it's pronounced - back at the Birmingham Cycle Show in October. The brand comes from the same Belgian company that makes Ridley bikes but the neutral name means owners of other makes can upgrade the components that came with a production bike without committing a branding faux pas not to mention that, according to Product Manager Yannick Christiaens, they've kept the colours simple to coordinate well with any paint scheme. 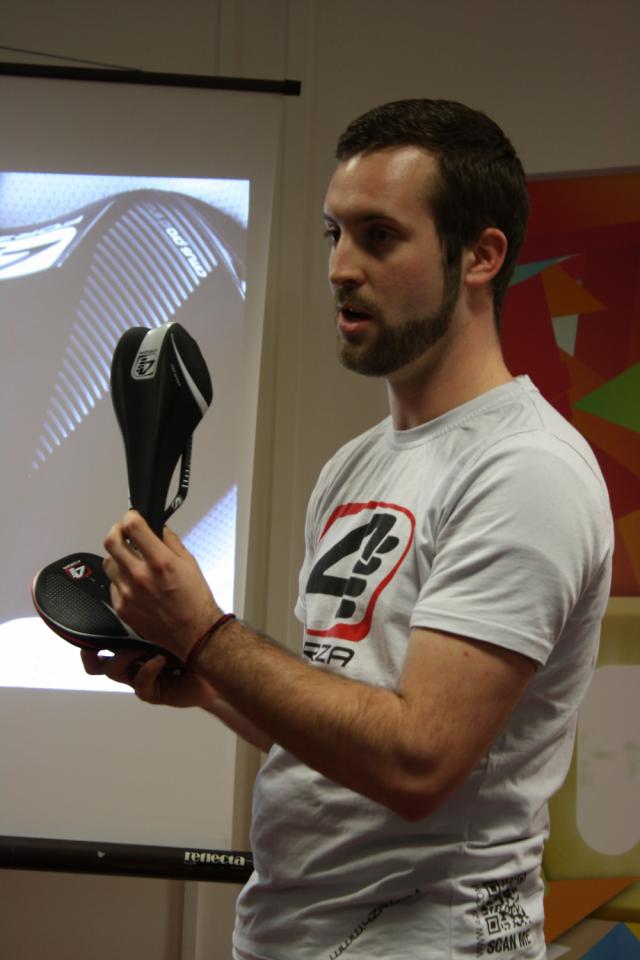 It's still early days for 4ZA with the first shipments only just now heading out to the shops and indeed there's a pair of their very promising-looking cyclo-cross cantilever brakes winging their way to our VecchioJo as you read this. Anyway, those wheels: as befits a company planted in Belgium and supplying the Lotto-Belisol WorldTour pro team with ambitions on the cobbled classics, Christiaens is stressing the practicality and durability of the new wheels with attributes like sealed bearings, best quality Belgian Sapim spokes and more of them than would be commonly found on after-market wheels where weight tends to be a headline concern.

Which is not to say that these are monstrous in the mass department. A pair of the all-carbon 50mm deep Cirrus Pro T50 wheels for tubular tyres weigh in at 1,560 grams and even the C50 clincher versions come to 1,700 grams which is conservative on the side of ultralight but possibly reassuring for an individual spending £1,349 for their best wheels. We'll soon find out because there is a pair of the latter on their way to us to try.

The Cirrus wheels in tubular and clincher versions have a lower 25mm aero profile and are absolutely ideal, says Yannick Christiaens, for cycle-cross considering the rim section cuts through mud as well as air and there are 32 spokes in the rear wheel at least. The weight for all-alloy seems very reasonable at 1,600 grams, the price is £399.99 per pair and there are both black and white rim colour options.

For £249.99, the Stratos wheels come in 19mm clincher-only but like the others with options for either Campagnolo or Shimano/SRAM cassettes. Spoking is 24/24 laced radial at the front and cross-2 at the rear. Still under two kilos  in weight; Yannick is keen to point out that the hubs despite the price are still their own design in cold-forged alloy, with alloy axles and well-sealed cartridge bearings. 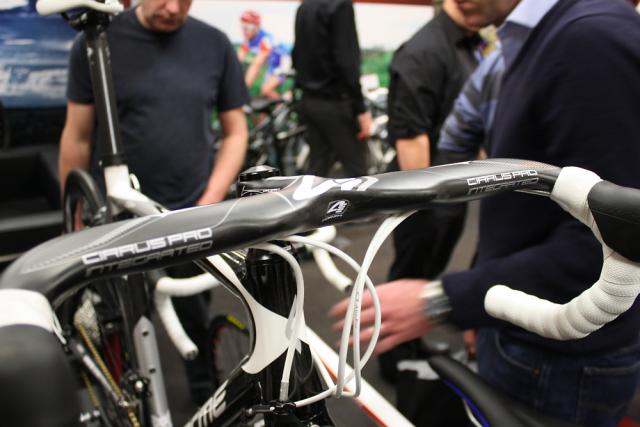 Today's Cyclist has its own Outeredge in-house brand Product Manager Steve Palmer shows off his Outeredge Sports Jacket. There's a rear view in the gallery above.

We've reviewed bags and clothing from the Today's Cyclist Outeredge brand before, most recently their unusual but brilliant tights that zip all the way up the outsides for fast removal, what their Product Manager Steve Palmer says they call their "Chippendale tights." We liked the look of the waterproof Sports Jacket especially in the greeny-grey option modelled here by Steve but there are more conventional red or blue options and, of course, hi-viz yellow. Price is a very reasonable £49.99. Also seeming very reasonably priced is the new white, reflective 'n' waterproof Outeredge Atacama bag range. A pair of large panniers is £69.99, the handlebar bag £44.99 and there is a messenger bag, seat pack, smaller panniers and bag that sits on top of a rack to match, as well. Attachment fittings are all by Rixen & Kaul and the stainless steel pannier clips had us clicking and unclicking in proper geeky style. 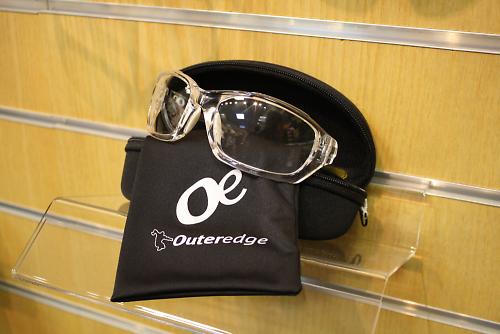 The Outerdge Traveller glasses come in plain clear or with a grey lens for sunnier days; it occurred to us that for just £19.99 you could afford to own a pair of both and wear as appropriate although there are Outeredge sets with more conventional snap-in interchangeable lenses as well for well under £40. 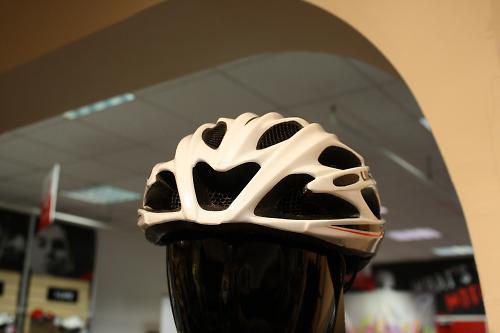 Limar's Ultralight has been staggeringly light at 175 - 200 grams depending on size for a couple of seasons; the latest version is the same weight but full of even larger ports for better ventilation. So large, in fact, that you'd  be concerned at flying wildlife if they weren't lined with mesh. 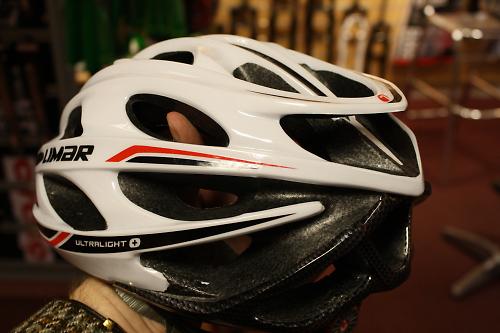 Knog Blinders coming in all sorts of patterns and colours 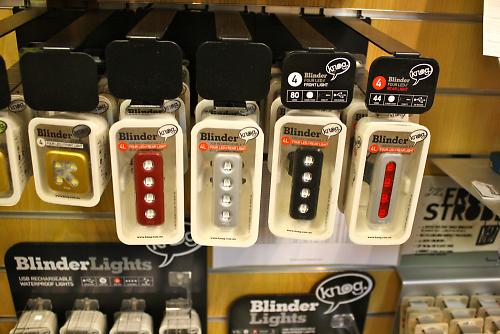 We posted about the new Knog Blinder front and rear lights having received the first plain aluminium production a couple of weeks ago - early reports good according to the road.cc lighting dept - but we hadn't realised that the distinctive square-shaped facia is not only going to come in colours - no surprise there - but with the aperture through which the LEDs peek shaped in rows, circles and all sorts of other designs Knog haven't even thought of yet.

According to their Hugo Davidson, the idea is to do what Swatch were famous for with their watches a few years ago, introducing new designs every year to keep things interesting in the shops. Anyway, that's all very nice but what's the reliability like, Hugo? The Blinder case is completely sealed - helped by the fact that being USB charged the housing no longer requires a leaky old battery compartment. In fact, he was showing off a Blinder burning away happily in a glass of water, which was pretty convincing. 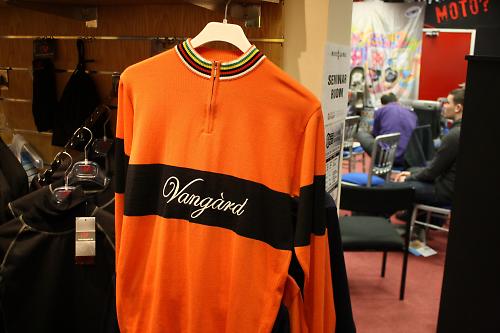 We've long been fans of Vangàrd's base layers but hadn't realised just how long the company has been around but that's the value in meeting people at trade shows and the like. Bo Vang is the son of the couple that started the company in 1946 and he told us how knitting is their principle business and always has focussed on keeping up with the latest yarns and production techniques; apparently every motorcycle policeman in Denmark is issued with Vangàrd under layers. It occurred to them this year that all that in-house knitting technology could be applied to the upper layers for cycling now that retro wool clothing is de rigeuer although Bo is insistent that modern yarns containing wool are hardly retro; cutting edge in fact for their performance attributes. Anyway, voila or "her er" as they say in Denmark, here are the cycling jerseys and zipped-tops that they're producing for bike shops either for this Summer or next Autumn and very nice they look, too. The short sleeve jersey in blue, orange or best of all white is £89.99, with long sleeves but sensibly no white option it's £109.99 and the winter windbreaker with nylon front and shoulders £129.99. Lovely. Wooden buttons on the rear pockets of the long-sleeved Vangàrd jersey: nice. 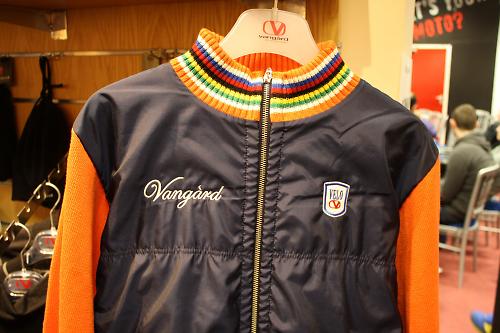 It doesn't get more retro but that orange shade is thoroughly 2012 according to the fashion mags. We've often teased the Taiwanese company MicroShift for their choice of nomenclature; Arsis and Bona being particular favourites for their recent gear systems but you can't argue with the engineering and we especially like that this small company gives the much larger Shimano and SRAM some competition at the competitive price points.  For the show on Tuesday and then for the huge international Taipei trade show starting next Tuesday - watch out for our Mat's reports from there - MicroShift had made a special test rig to demonstrate the shift quality. Apart from the aforementioned 10-speed gear sets, we were pleased to see STI-style shift levers for either 8 or 9 speed; a useful upgrade perhaps for anyone with Shimano 2300, Sora or Tiagra components from the last decade. Either £109.99 or £119.99 depending on 8 or 9 speed. 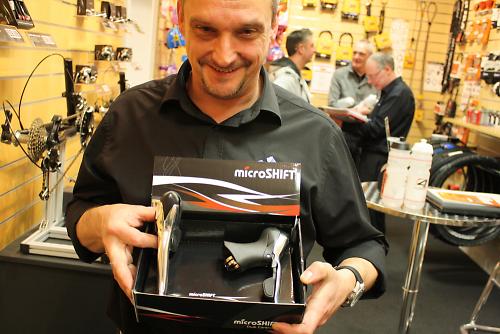 Graham Darby shows off the MicroShift non-series combined brake and gear levers that might be a tempting upgrade for existing Shimano Sora owners. 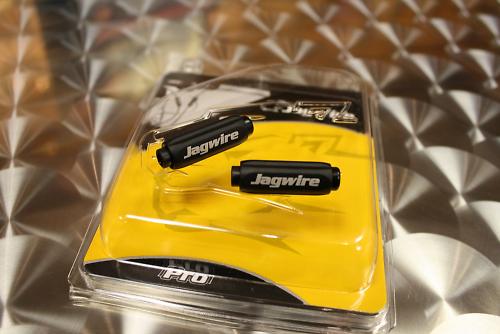 Nothing new in glamorous aftermarket cable sets from Jagwire but their Jean Laurent wasn't going to be stopped from showing us neat stumpy rubber bumpers in clear or black to help prevent the cable outers from wearing on your precious head tube paintwork as well as indexed adjusters called Thinlines - see above - that can be installed in your gear cables near the handlebars for fettling on the fly. £10.99 per pair. 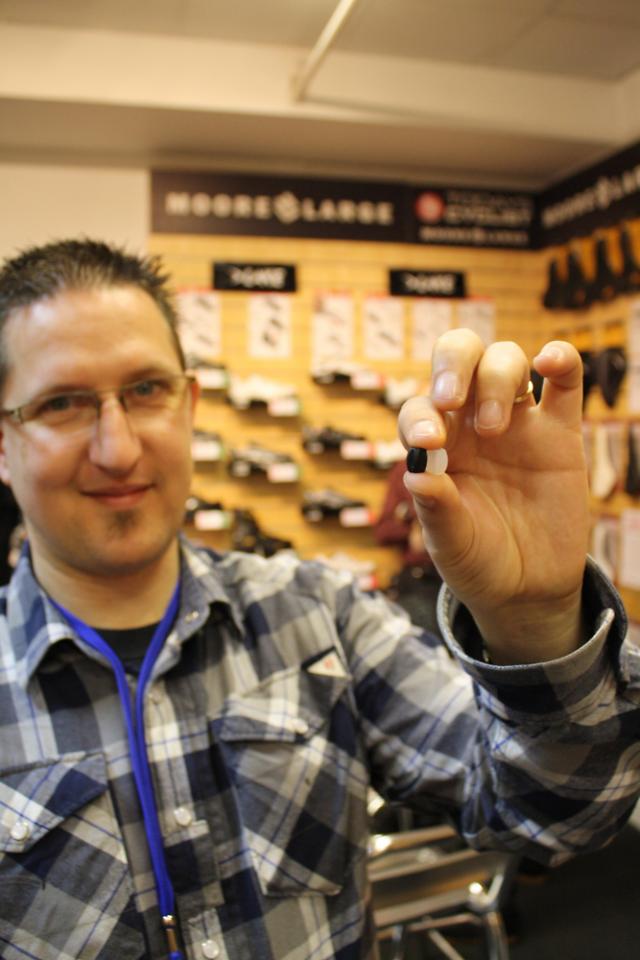 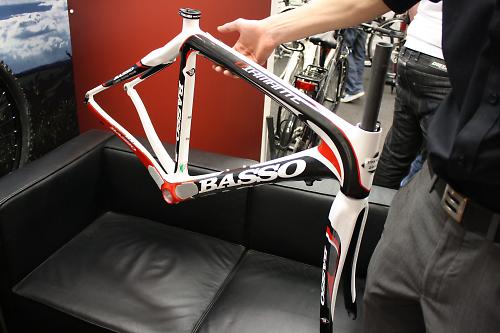 Just in case you thought we spent all our time talking about cables, we had a chance to fondle the latest version of Basso's Diamante carbon-fibre frame and fork; the latest to sign up to FSA's wider, stiffer BB86 Evo bottom bracket 'standard' as well as the now-obligatory tapered fork steerer column and head tube. It - the frame alone - weighs 910 grams which is light but Basso's man at Moore Large Adam Biggs stresses that despite the low mass, the  whole hand-laid-up-in-Italy fuselage is as stiff and strong as you like, pointing out in particular the flowing ridge that runs along both sides of the top tube, down the head tube and then the forks. It's a thoroughbred beauty but then it probably should be for £2,699.