Electronic shifting and hydraulic braking soon to be an option with Shimano Di2 TRP combo... plus new cyclocross cantis and road callipers
by Mat Brett

TRP will launch a hydraulic road brake lever that features buttons for Shimano’s Di2 electronic shifting later in the year, probably around June or July.

Here’s what the brake/shifter, called the Hywire, looks like, as shown on TRP’s stand at this week’s Taipei Cycle Show. The only thing is, the finished version might well have changed considerably before it’s released to the public. 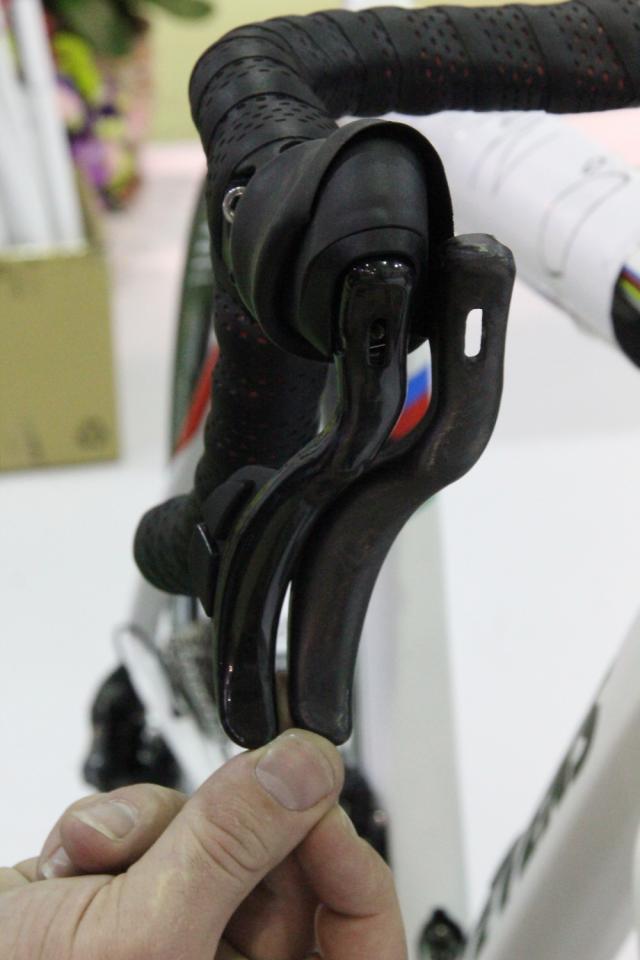 TRP have spent a lot of time working around Shimano’s patents on the shifter and they might have more work to do yet. They’ll probably use a wider brake lever, for a start. The finished version is more likely to be as wide as lever on the right rather than the one on the working prototype. 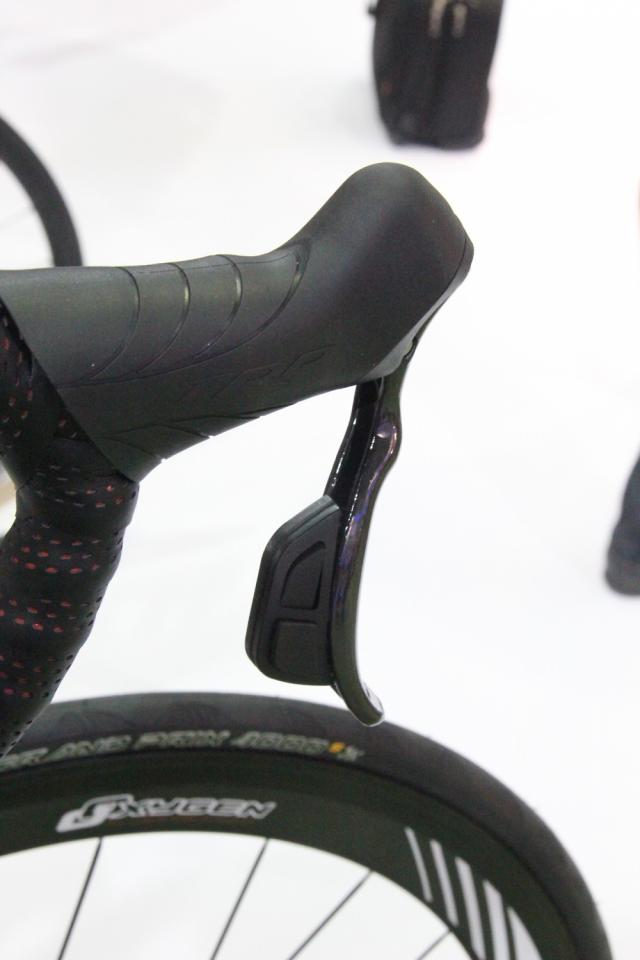 TRP are also considering moving at least one of the shift buttons. Currently, those buttons could easily be pushed accidentally while you’re braking so TRP are revising the design.

We’re told that an option being considered is moving one button to the inside of the lever body, although then TRP need to consider Campagnolo’s patents. It’s not easy coming up with an effective design that doesn’t infringe somebody else’s work. 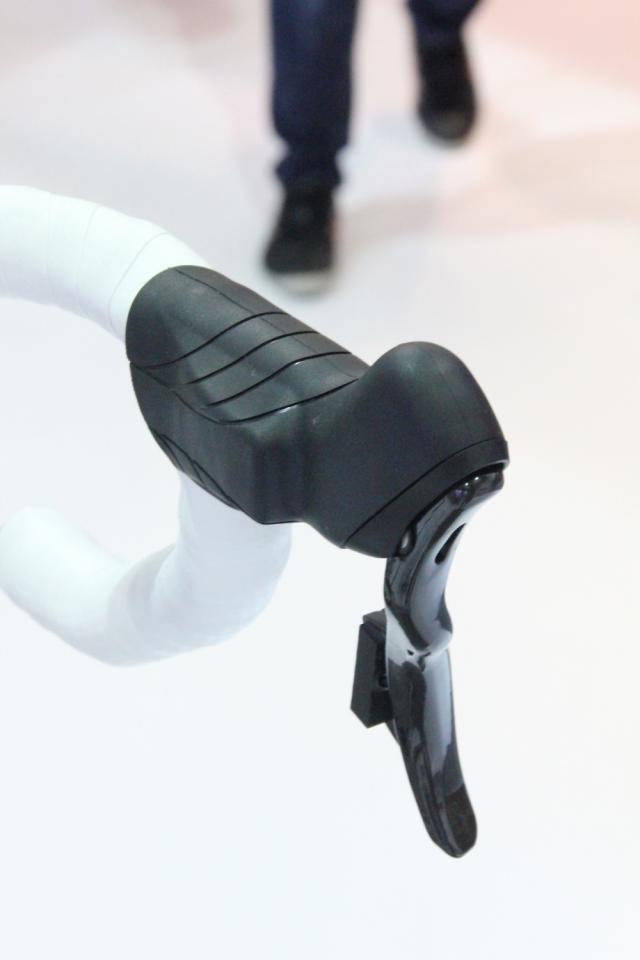 The master cylinder for the hydraulics will be incorporated into the shifter body. On the prototype, the edges were pretty prominent. Disregarding the ‘do not touch’ signs, we could easily feel the edges through the hood. That will doubtless be worked on before the final version is release. 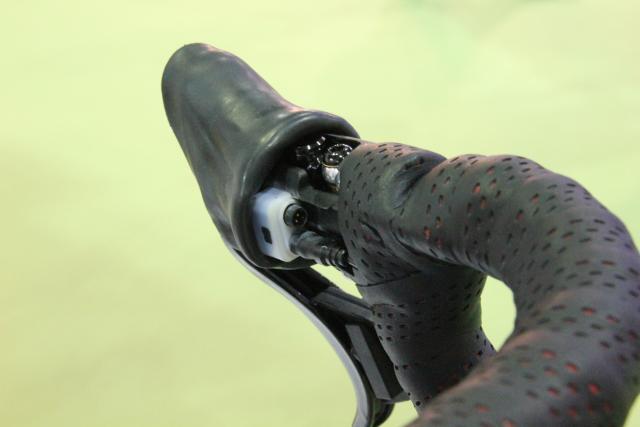 Roll the hood back and you can see two plugs in there. One of these is for use with Dura-Ace Di2 components and the other for the new Ultegra Di2 – they use different wiring. 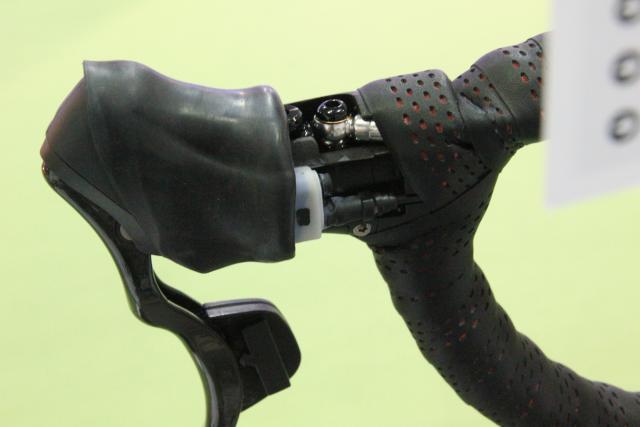 What else can we tell you about the Hywire? TRP say the callipers are. “Optimized front and rear specific callipers to maximize stopping power and minimise weight.” And that’s about all there is to tell right now.

However the design ends up, TRP seem very confident they’ll have a Di2 compatible drop-bar hydraulic brake on the market during the summer. 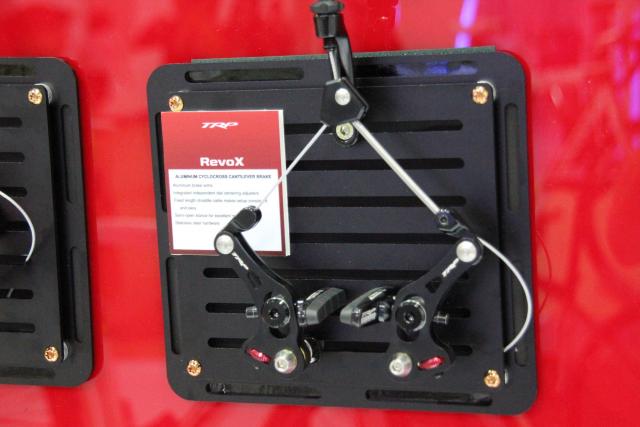 TRP have been busy on plenty more besides the Di2/hydraulics crossover. Like what? Like these new RevoX cyclocross cantis, for example, which have been developed to run alongside the existing EuroX brakes.

The difference is that whereas the EuroX brakes are minimalist race brakes, the RevoX brakes have adjustment of the spring, pad and height. The brake arms are aluminium with stainless steel hardware and the semi-open stance makes for good mud clearance. These will be available from April. 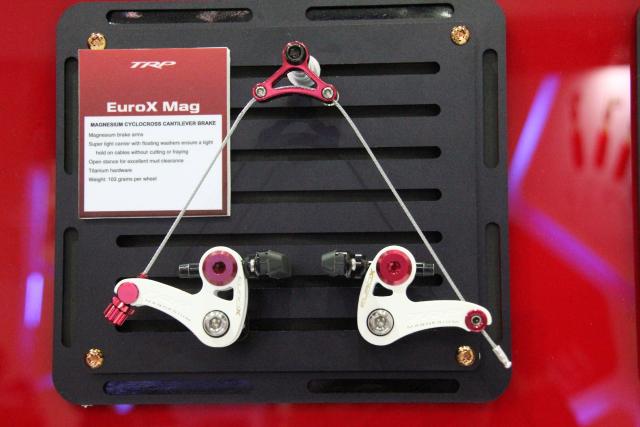 Speaking of the EuroX, aluminium, magnesium and carbon versions are in the 2012 range. 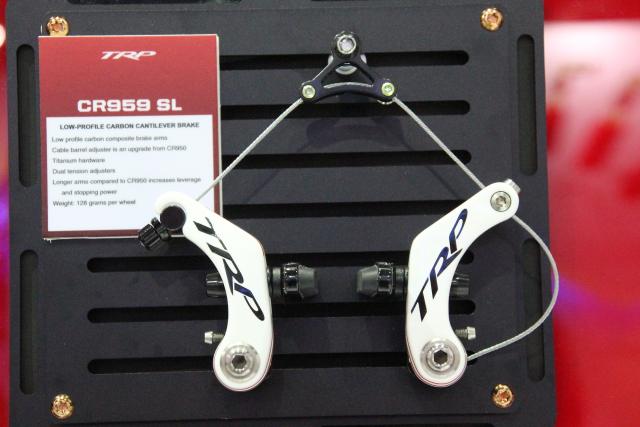 The other high-level canti is the CR959SL which comes with carbon-fibre composite arms, TRP’s neat little barrel adjuster, and long arms for increased leverage and high power. 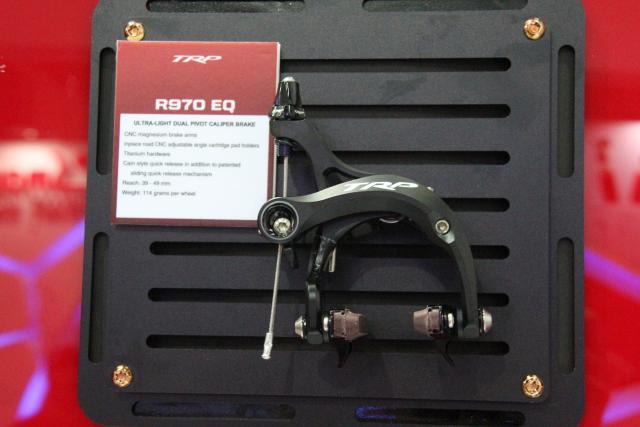 The very lightweight R970SL dual-pivot brake calliper has been in the TRP range for a while but a new R970EQ version is available in the 2012 lineup. We saw this version on pros’ bikes last season. It’s a very similar brake but with a different quick release mechanism, the EQ model coming with a cam-style QR rather than the sliding QR design of the SL. It’s easy to use and you can incrementally adjust the position of the pads in relation to the wheel with the EQ. 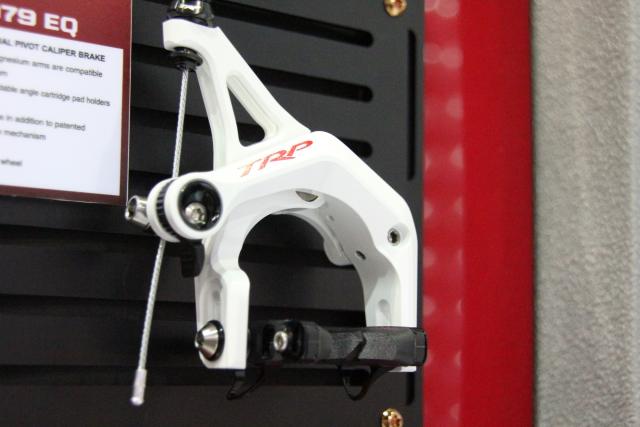 The EQ version still comes with CNCed magnesium arms and titanium hardware and it’s just 4g heavier than the SL version. A lovely bit of kit. Buy either version and you get both alloy and carbon compound pads that have been upgraded over previous incarnations. 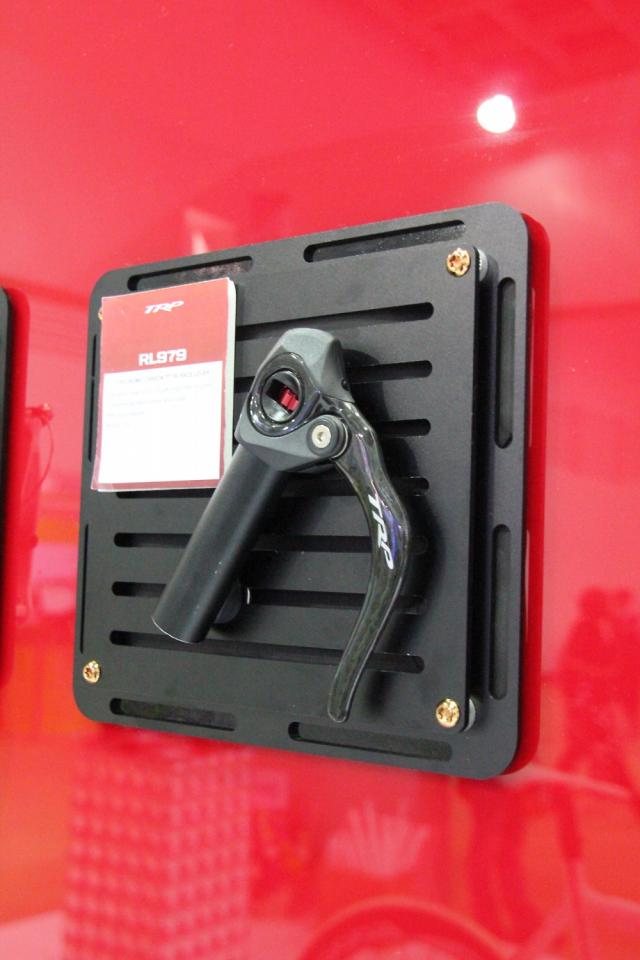 TRP do a whole bunch of time trial/triathlon brakes and they’ve redesigned their RL879 and RL979 levers for 2012 to make them more ergonomic. They have a pivot in there to keep the cable-pull linear and reduce friction. The alloy 879 is the cheaper option of the two while the 979 model (pictured) is carbon and it comes with a barrel adjuster.