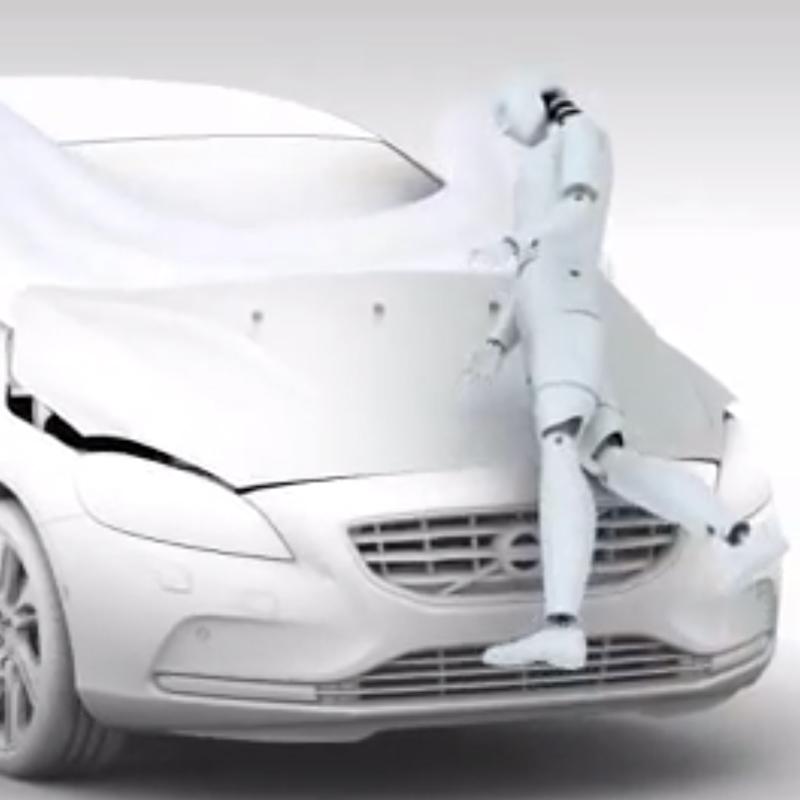 Coming in May: external airbag for Volvo's new V40 +VIDEO

Volvo, the car company well known for the safety features on its vehicles is introducing an integrated airbag into the bonnet of the 2013 model year V40 which goes into production in May with the aim of giving more protection to pedestrians and cyclists in the event of a collision.

Thomas Broberg, senior technical advisor at Volvo, told The Engineer, "We’re using airbag technology to have a cushioning effect on the outside of the vehicle to try and protect pedestrians."

The external airbag, which was developed at Volvo’s own R&D facility in Sweden, inflates in less than a second and is most effective, according to Volvo, in collisions where the car is travelling between 12mph and 31mph. The airbag is deployed when sensors in the front bumper detect contact between the car and a pedestrian or cyclist.

Upon impact, the windscreen end of the bonnet is released and raised ten centimeters - 4" - by the inflating airbag, which covers the area under the raised bonnet as well as approximately one-third of the windscreen and the lower part of the A-pillars that support the windscreen.

"Another reason for raising the bonnet is to create extra space between the hood and the hard components in the engine-bay compartment — basically creating more space to provide a cushioning effect," said Broberg.

road.cc posted an article in March 2010 which described the origins of the project; an initiative between a Swedish-American technology company Autoliv, the Dutch safety research consultancy TNO Automotive, the Netherlands’ Ministry of Transport, Public Works and Water Management, The Fietresbond which is the Dutch cyclists’ union and an insurance company, Achmea.

Volvo has also developed a collision-warning and auto-brake system, which reduces the speed of the vehicle if a collision is unavoidable while sounding an alarm to alert the driver.

The external airbag and collision-warning system introduced at the same time could have an impact on pedestrian and cyclist casualty rates. UK Department for Transport figures show that 5,605 pedestrians and 2,771 cyclists were killed or seriously injured on Britain’s roads in 2010, with most fatalities occuring in incidents where the car was travelling below 40mph.

The concept of external airbags has been around for several years but taking the leap from concept to being put into production is significant, Broberg told The Engineer.

Of course, pedestrians and cyclists are likely to have mixed feelings about this development. While applauding it at one level, campaigners for pedestrian and cycling safety are likely to lament the emphasis on passive safety while governments ignore the elephant in the room; that the more drivers become immunised from their responsibilities, the less likely they are to anticipate, consider and pay attention in the way Highway Codes generally advise.

As one of the commenters, Nick Jakeman on The Engineer website story has already put forward, "Systems such as this address the symptoms rather than the cause of the problem. Nothing will change until we can educate vehicle drivers that the safety of others should be their prime concern and that the use of a vehicle is not a right but a privilege with attendant responsibilities. The very use of the word 'accident' to describe a collision implies an abrogation of responsibility and a failure to recognise an individuals responsibility to others."