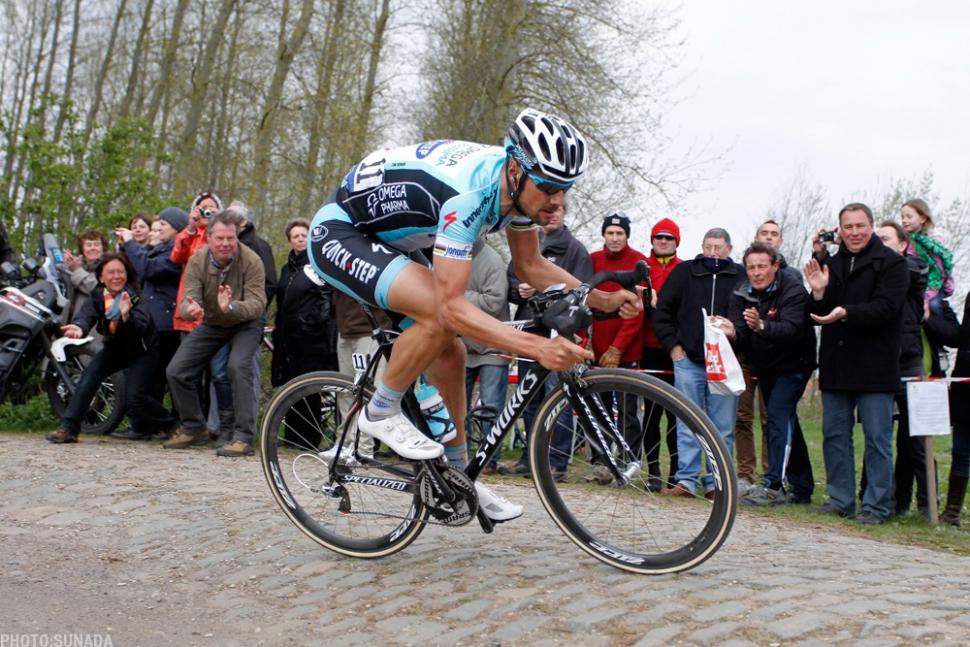 Shhh! The latest incarnation is still a secret
by Mat Brett

Boonen rode Paris-Roubaix on the new Specialized S-Works Roubaix which we guess will be called the SL4 although that has not been officially announced - we're using our Sherlock Holmes-like powers of deductive reasoning there, based on the fact that the last incarnation was the SL3. In fact, Specialized haven’t said anything about the new bike yet. Looking at it, though, you can see that they’ve altered the design of the Zertz – the inserts in the chainstays and fork legs that are designed to dampen out vibration and so improve the ride quality.

Rather than being fully enclosed within the carbon structures, it looks like the Zertz are now surrounded on only three sides with an open back section. The Zertz look bigger than previously too. We’re guessing the idea is to increase the amount of compliance – that’s what the bike is all about, after all – but that has yet to be confirmed.

That’s all we can tell you about the new frame until Specialized decide to reveal more. The groupset is SRAM Red and those are clearly Zipp wheels – 303s, by the look of it.

This is the first time that Boonen has ridden to victory on the new bike. He won Gent-Wevelgem aboard an S-Works + McLaren Venge and was on an S-Works Tarmac for the Tour of Flanders. Specialized’s marketing department must think it’s several birthdays and Christmases all rolled into one.

“I think this is my most special win at Roubaix,” said Boonen. “I have won four of them now, but this feels different. To win it like this – alone – with a long attack like that. I usually don’t do that, but the legs felt good and I said, ‘why not?’”

Of course, Specialized are eager to get every last bit of promotion out of Boonen’s wins; that’s why they sponsor riders, after all. They’re keen to point out that Tommeke has had his riding position optimized with their Body Geometry FIT (Fit Integration Technology).

If you’re not familiar with Body Geometry FIT, this is how Specialized explain it: “BG FIT is a proprietary bicycle fit system consisting of trained fit technicians, specialist fitting tools, a unique fit assessment process and ergonomically enhanced bicycles and equipment. The combination of this system enables you to ride faster, longer and in greater comfort.”
And how has that helped?

“With Body Geometry FIT, Boonen changed a few things about his position. His handlebar width went from 46cm to 44cm for better aerodynamics. He chose the 155mm version of the S-Works Chicane Body Geometry saddle, and raised his saddle height slightly. And with his Specialized Body Geometry shoes, he uses BG High Performance Footbeds for a tailored fit and maximum power transfer. “

That’s a Specialized S-Works Prevail helmet perched on his head too. So now you know what you need if you want to win Paris-Roubaix. Oh, and being an absolute monster on the bike might come in handy too.