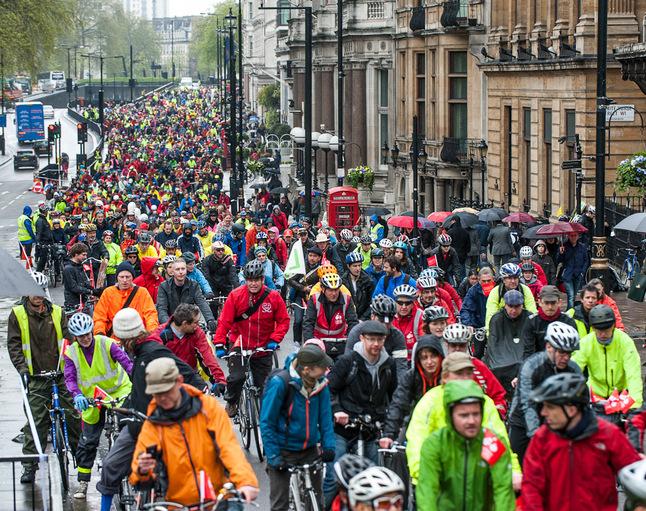 Thousands ride for safer streets in London, Edinburgh and Rome

Up to 60,000 cyclists take to the streets to campaign for better conditions on two wheels
by dave atkinson

Thousands of Cyclists braved some challenging weather conditions today to take to the streets campaigning for safer conditions for cycling. In London, 10,000 riders braved heavy rain on the London Cycling Campaign's Big Ride which was held on closed roads in the capital. Further north, Pedal On Parliament organised a ride on a cold but dry day in Edinburgh which attracted at least 2,000 cyclists. Meanwhile in sunny Rome, as many as 50,000 took to the streets on two wheels.

The London ride was organised with the assistance of The Times newspaper who have been spearheading the current Cyclesafe campaign. The aim was to get the London Mayoral candidates to sign up to the Love London, Go Dutch campaign which calls for continental-standard cycling infrastructure in the capital. All five main candidates have now done so.

Feedback from the ride has been overwhelmingly positive, with many people posting on twitter about their experiences. One of the most poignant was from @citycyclists: "Woman on #TheBigRide hadn't cycled for 56 years. First time she's felt safe enough. Much more of this please. Should be Safe every day".

The London ride which set off from Park Lane attracted cyclists of every type and age group and you can get a good flavour of what it was like from ibikelondon's posting on the day which also features lots of pictures and some video.

More than twice the number of riders expected turned out for Edinburgh's Pedal on Parliament.  Borders and Lothian police put the number at up to 2000 while organisers of the ride said there might have been as many 3500 riders present in support of the campaign's eight point plan to make Scotland a cycle friendly nation and help the Scottish Government achieve its target of 10 per cent of all journey being made by bike by 2020.

There was better weather in Rome and a huge turnout for the Salvaiciclisti campaign's organised ride. The Italian campaign was inspired by the Times one, with the two taking centre stage at the Milan - San Remo earlier in the year

LCC chief executive Ashok Sinha, riding with his partner Lucy and their children, said: “The Big Ride has been a spectacular success: we’re incredibly grateful to the thousands who braved the very British weather, and showed our politicians the amount of passion there is for safer cycling in the capital and beyond." Certainly today's events – and the recent protests against Addison Lee – have shown that there's a real depth of feeling in the capital that cycling should be higher on the agenda, not only from committed cyclists who are ready to brave the current conditions, but also from an increasing pool of Londoners who maybe aren't cycling right now but would like better provision and infrastructure.

“An extra special thanks must go to the hundreds of volunteers, without whom we couldn’t have made the Big Ride happen," added Sinha. “The five main mayoral candidates have all put their names to our Love London, Go Dutch campaign, so now it’s time to see action and funding that match the aspirations of London’s voters.” If nothing else, the London ride will have shown that the safety of, and provision for, cyclists is likely to be a key mayoral issue.