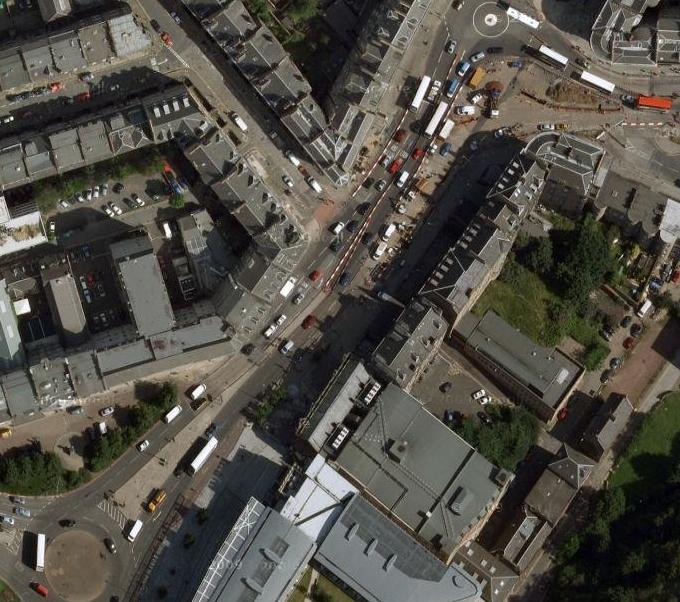 A tale of two cities... and three roundabouts
by Simon_MacMichael

Proposed changes to road layouts at key junctions on the eastern edge of Edinburgh city centre have been dubbed a “cyclist blender” due to the claimed danger they will pose to bike riders. The reaction contrasts with that given to Transport for London (TfL) for its latest plans for Bow Roundabout, which have been greeted with cautious optimism by a leading blogger.

Dr Caroline Brown, who lectures in urban planning at Heriott-Watt University in Edinburgh, told The Scotsman that the nickname ‘cyclist blender’ had been bestowed by a colleague on plans for a traffic scheme (downloadable here) that would require cyclists to leave a kerbed cycle lane to move out into traffic to negotiate roundabouts at either end of a 200 metre stretch of road.

The roundabouts in question are at the southern end of Leith Walk, one at the junction with London Road, the other a couple of hundred metres closer to the city centre at Picardy Place.

“According to these plans, in order to negotiate the roundabout you are forced to leave the segregated lane to cut across lines of traffic, which is clearly dangerous,” she explained.

“You must then share lanes with buses as you head down Leith Walk. One of my colleagues described this roundabout on London Road as a ‘cyclist blender’. People will really be despondent because they thought the proposals would be so much better than this.”

Picardy Place is where the controversial Edinburgh trams project will have its eastern terminus.

The route was originally planned to continue to Leith via Leith Walk, with some work already carried out, and the current £5.5 million road works are aimed at reinstating the road and remove preparations for the tramway. Water utility works are also taking place.

Tracey Griffen, speaking on behalf of community organisation Greener Leith, said that locals would simply be pleased that repairs were being carried out to the road.

“In regards cycling provision, it’s not going to be Copenhagen but I can see that cyclists have been considered in the planning,” she commented.

“The main issue for the businesses and residents of Leith Walk is to get it back open without any drama.

“Everybody is getting bored of being cynical about it, that is why the council has to illustrate that we can trust them on this.”

Lesley Hinds, transport convenor at Edinburgh City Council, maintained that the plans were still subject to revision, saying: “The design out for consultation is only preliminary at this stage and we very much welcome as many different views as possible so that we can find the solution that best meets the competing needs and priorities of all those who live, work and shop in Leith.”

“The preliminary design has been drawn up by the project team as an illustration of what is achievable given the funds currently available. Obviously if money were no object, there would be scope to do much more. Nothing will be finalised until the consultation has concluded in mid-January 2013.”

Criticism of the plans in Edinburgh, and specifically the highlighting of the fact that the layout means cyclists have no choice but to place themselves in a position where they are at risk, inevitably brings to mind Bow Roundabout in East London, where Brian Dorling and Svitlana Tereschenko died within weeks of each other a little over a year ago, both killed by lorries.

The incident that claimed Mr Dorling’s life took place at an approach to the junction where the Barclays Cycle Superhighway he had been riding on abruptly finished – ahead of its launch, Mayor of London Boris Johnson had described the such facilities as “giving commuters easier, continuous and safer ways to travel to work by bike.”

Yet it was the very layout of that put him in mortal danger – Ms Tereschenko was killed on another part of the roundabout where there is no Superhighway – and in the aftermath of those two tragedies, it was revealed that TfL had failed to act on recommendations of a report it had itself commissioned regarding the safety of cyclists and pedestrians at Bow.

Since then, pressure from cycle campaigners and opposition politicians have resulted in a review of the roundabout.

In June, early-start traffic lights for cyclists were installed at the eastbound approach to the junction, which TfL says has reduced the risk to riders from left-turning vehicles.

The latest plans for cycling provision elsewhere on the roundabout, published earlier this week, have gained cautious approval from Danny Williams, writer of the Cyclists in the City blog.

“Astonishingly, they're rather good,” he wrote, adding that he was “genuinely impressed” with some elements of the plans.

Those include an enlarged 18-metre deep cyclists-only zone on the eastbound aproach ahead of early-start traffic lights, plus a bus stop bypass that TfL says will eliminate conflict between cyclists and buses pulling out.

Full details, including links to a map and to comment on the proposals, can be found on the TfL website.

However, he wonders why such features cannot also be applied to the rest of the route as it heads into the City.

“Overall, this upgrade at Bow is the first time I've seen Transport for London come up with a design that really understands how a cyclist approaches a junction and how the needs of that cyclist are different to the needs of someone in a motor vehicle,” he explains. “It's the sort of design (almost) that you might expect in Denmark.

“But if cycling is ever going to take off properly in London, what it needs is consistency.

“What Bow roundabout shows is that Transport for London is capable of developing high-quality proposals that will make it safer and easier for everyday journeys to be made by bike.

“But I question why TfL is not building the same quality just a mile up the same stretch of the Cycle Super Highway at Burdett Road. This suggests to me that there's a real problem with providing a consistent degree of quality for safer cycling.”