What's hot at the UK's best trade-only show. At least, in the halls nearest our room.....
by dave atkinson

It's CORE Bike time! One of our favourite shows, because they have free food and inflatable sumo suits in the evening. I mean, because it's a great place to take a look at a big range of UK distributors' new and shiny kit, and make mental wishlists. And actual wishlists.

We've just arrived so we haven't been round the whole thing: that's tomorrow's fun. We did run into a few rooms, snap some highlights and run away cackling though. Here's what we saw: there'll be more tomorrow!

Who's the brand you had as a nailed-down cert to have a disc-equipped Carbon road bike at the show? That's right, identiti. The dirt jump and bmx people. Well they're not going to get pigeonholed apparently, and the Initial road bike (see what they did there) pictured above is something to bring to the dealers to get a bit of interest going, as much as it is a big commercial release. That's not to say you can't have on: £900 to you for the frame and fork, guv. identiti (lower case on purpose, grammar pedants) claim a weight of 1.5kg for the frame and fork, which they've worked with a long-standing supplier in the far east to produce. Built up as shown, with Di2 and carbon wheelset, it's a claimed 16.8lb (7.6kg) without pedals or bottles. It's running a Hope V-Twin and Hope callipers too. We had the usual will-they-work-won't-they-work discussion, which you're free to continue below. 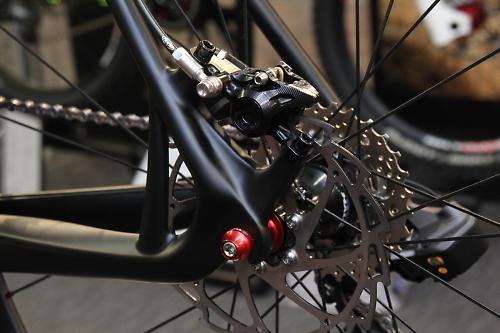 The rear disc mount is braced and looks tidy Hope's V-Twin does the converting

The wheels are Halo's new Carbaura Disc, with straight pull 6-bolt disc hubs (11-speed freehub) laced to full carbon rims. Though they do have a brake track, distributors Ison reckon you're better off using a disc on 'em. Claimed weight is 1.5kg which seems pretty light considering, we'll bung them on the scales if and when we get a set. 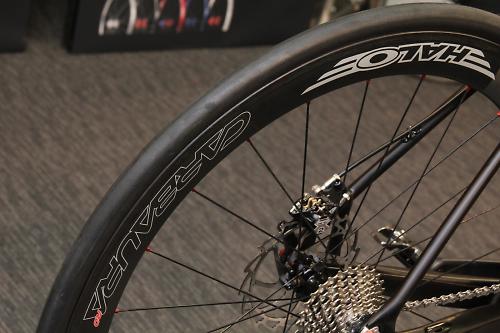 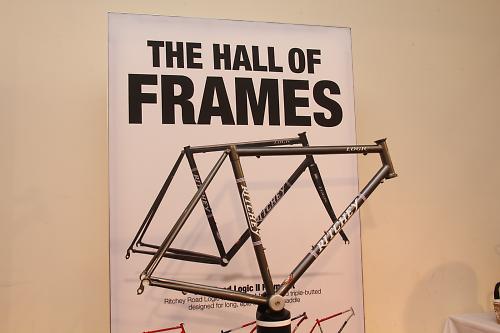 This is a straight-down-the-line steel road bike, fashioned from WCS Logic triple butted tubing. It's a lovely looking beast, too. Okay you don't have to knock in your headset cups. but that's it Logic tubing is triple butted for lightness and comfort Swiss Cross. Put those Mini-V's away 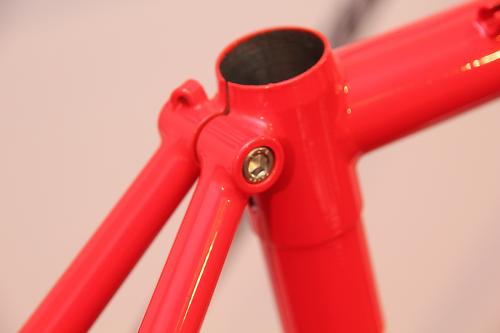 Nice detailing round the seat clamp

There's a full range of Ritchey steel bikes. This is the Swiss Cross which similarly eschews most attempts at modernisation. If it ain't broke and all that. There's 26", 27.5" and 29" mountain bike frames too, in the classic Ritchey red, white and blue. 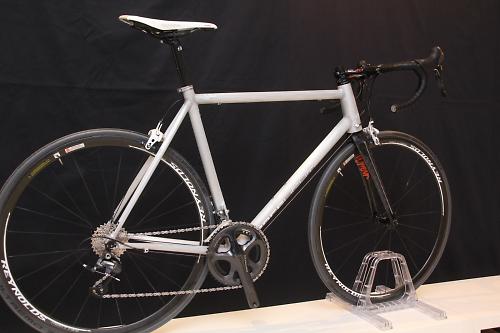 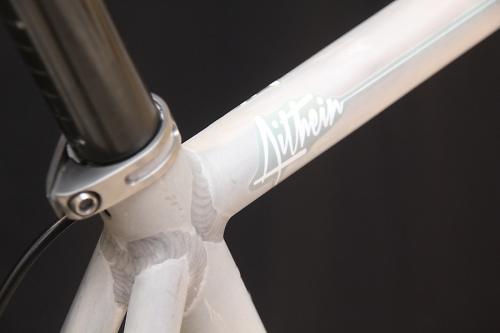 Kinesis showed us their Aithein aluminium road frame a while back when Dom came to see us. Aluminium is here to stay, they reckon. And when you can shoehorn a bunch of tech features into a frame that builds up (in the spec shown) to 14.8lb (6.7kg) then you have to think that we're not done with metal yet. That's not even for Dura Ace. Although it di have some pretty natty wheels on. And brakes. 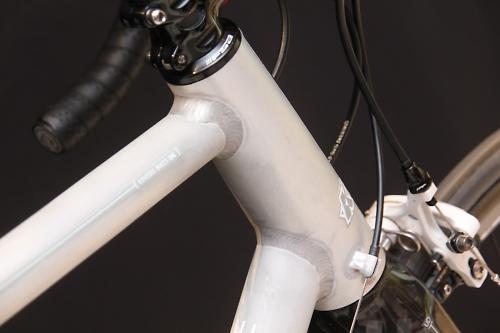 Asymmetric head tube; the cable guide will be in the right place The finished production bike is due to land in a few months and will have the same asymmetric head tube but a wider bottom bracket (press fit rather than external) and correctly positioned cable routing. There'll be orange and black ones, with laser etched decals. As soon as they land we'll be first in the queue to have a go. We're sharpening our elbows even now. 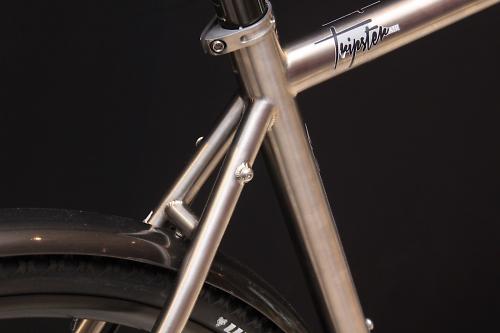 Something else they showed us, which we also covered in that article, was the Tripser ATR (Adventure, Tour, Race) frameset: a bike for doing lots of different stuff, essentially. Disc compatible, with a similar geometry to a Racelight but longer and lower, with clearance for 40mm tyres and mudguards. A gravel racer? An expedition bike? A have-a-go 'crosser? A comfy long distance machine? Yes, yes, yes and yes, says Dom. It looks like it should be a lot for fun, that one. Again, it's near production. What, this old thing? It's just my Colnago Master 30th anniversary edition. 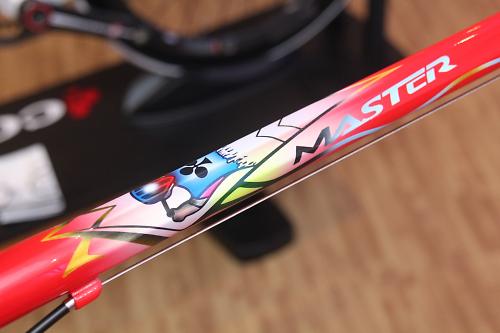 To be honest It wasn't even meant to be on the stand, I was cleaning it and forgot to put it away. 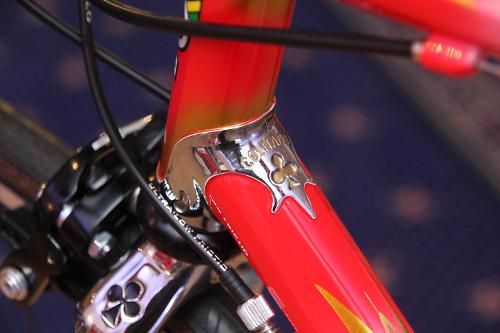 Yes, it does look shiny, doesn't it? I've got a blue one and a black one too. You know, for good measure. 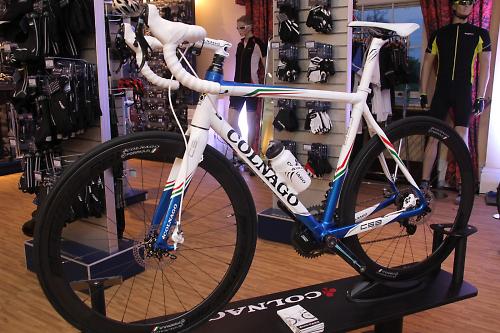 It's not all inch headsets and hand-painted dropouts on the Colnago stand though: at the other end, figuratively and literally, is the C59 disc - Colnago we did put money on having a disc road bike. Because we've seen it a few times already. And even ridden it. 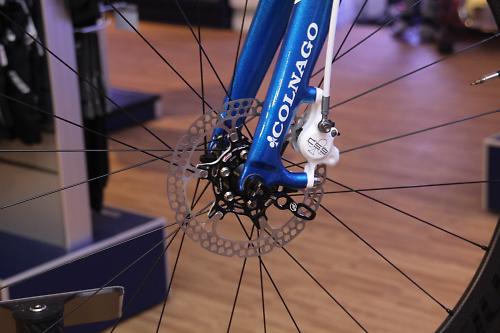 The C59 disc runs Campag EPS electronic shifting or Shimano's Di2, and the levers are a just-past-prototype unit from Formula running an R1 MTB calliper. You get dinky 140mm rotors front and rear. Will they, won't they. We know. 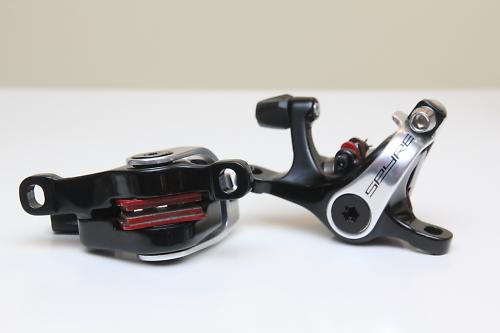 Talking of discs, TRP had two new disc things. They both look interesting. On the one hand they've been working hard to improve mechanical discs. The Spyre is the result. It addresses a couple of the problems with most (and it is only most, more on that in a minute) mechanical discs. 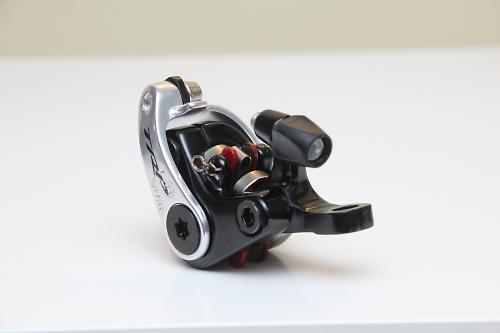 For a start, pull on the brake sets up twisting forces in the arm that holds the pad to the rotor. The more it twists, the spongier it'll feel. The Spyre has a horseshoe-shaped arm that attaches to both sides of the calliper. So all the force is in the direction of pull. Why didn't I think of that? It also stands less proud than a normal mechanical disc, meaning fitting your rack and mudguards should be a sight easier.

The other thing that's a faff is setting up mech discs. But the Spyre promises to be a lot better. Because both pads move. 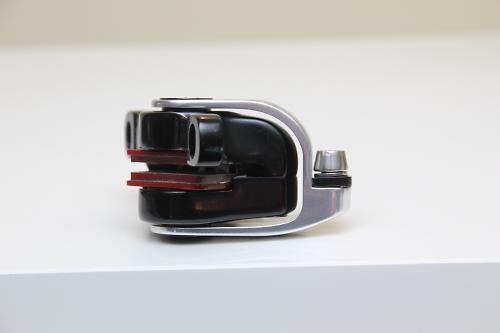 This is great for two reasons. For a start, the two pads moving apart gives you a bit more space than just one pad moving away. So you don't have to set them up quite so close. And of course, you can loosen the bolts, grab a handful of brake and tighten them up and the calliper should – in theory anyway – be centred. With only one pad moving you have to wind the inside one out a bit and tighten up the cable. It's a bit of a pain; this should make it better?

Why didn't anyone do this stuff before? Well, Gusset did, apparently. They've had a dual action mechanical calliper in the range for years. Not that they told us… 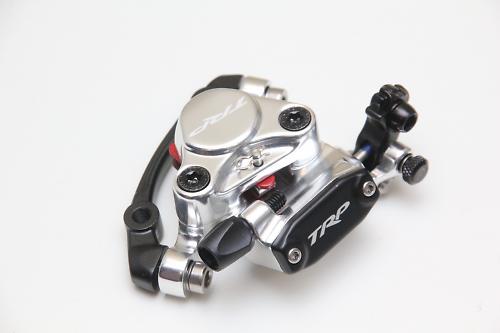 TRP's other new thing was a cable-to-hydrualic system where the calliper and master cylinder are bolted to the stay/fork in a single unit. Fitting hydraulic discs could hardly be easier: remove mechanical calliper, replace with the new Hyro and off you go. Job done. 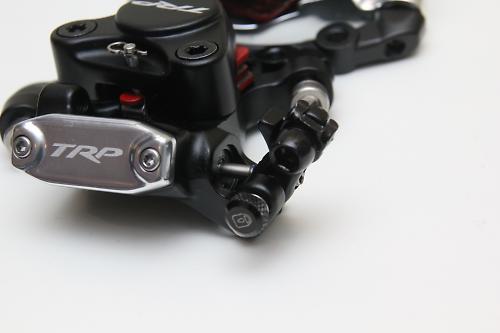 Obviously it's not a perfect solution: there's extra weight at the wheel centres and you don't get the performance or weight benefit of a long section of hose. But it might be an easy upgrade for your disc 'crosser or tourer. 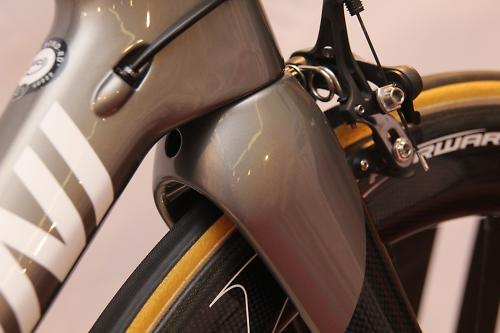 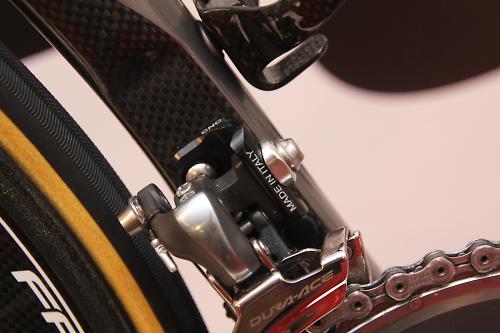 Cipollini are in the house too. Lawks, they make a nice looking bike. The Bond is packed with tech but luckily there's a nice video which saves me the bother of typing it all out:

And here's one of Super Mario hamming it up as 007 in fine style. You're welcome.