Donhou turned heads at Bespoked Bristol with an eclectic range of bikes. Many of Tom Donhou’s latest builds have been inspired by the Rapha Continental bike he showed this time last year, with customers asking for bikes built in the same style. Lightweight road bikes with disc brakes and built for comfort over a long distance. And achingly pretty. Donhou bikes have in a very short space of time become incredibly desirable, there is now a 12-month waiting time for a frame. It’s still just Tom Donhou juggling the demands of a growing business with a skyrocketing profile as the demand for bespoke frame builders in the UK grows, and actually finding time to design and produce frames.

Donhou had a good spot at this year's Bespoked show, and first thing to catch the eye of most entrants to Bespoked was stonking 104t chainring on his land speed record singlespeed racer. It’s been designed to chase a dream of smashing through the 100mph barrier, and Donhou himself will be piloting the bike as they attempt the ride in the following weeks. He is just waiting for some good weather, they were hoping to have cracked it by now, but with winter outstaying it’s welcome in he and his team weren't able to get out on the airfield they'd booked for the attempt as often as they'd like. 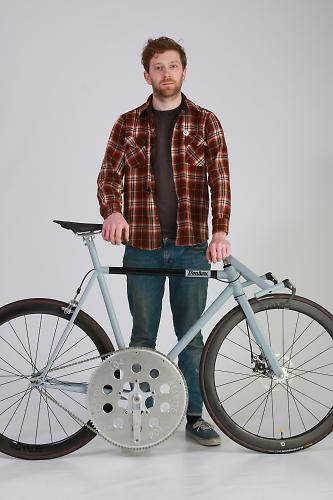 We asked Donhou just what inspired this bike:

“I’m really into land speed record stuff, in the 60s when the guys were battling it out down on the salt flats almost doubling the speed limits in a couple of years, I love all that stuff. I know a bit about cars but I could never afford to take a car over there. So I asked what can I do? I can build a fast push bike. It would never go that fast, but ah why don’t we do it motor paced. 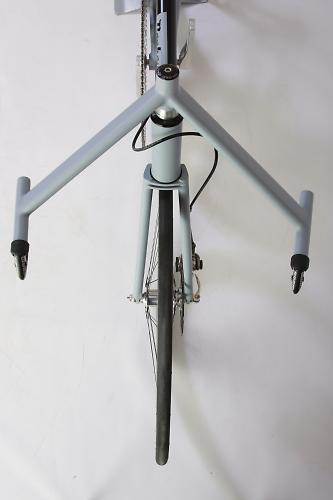 "So I built this with the intention to feel it out, I don’t know how fast it can go, that’s my best guess as to what I can do. I built the bike how I thought it should look. No wind tunnels involved, it’s all grassroots, it’s done in that spirit of those guys in the 60s testing jet engines in their sheds. It’s that spirit. We’ll see if we can stay on it if we get up to 100mph. We’ve tested it up to 60mph.”

And what was it like riding a bike with a 104T chainring across an airfield behind a Ford Zephyr (really) on a wintry March day? "Scary" says Tom, although he might said it with a bit more emphasis than that. The Ford Zephyr was a nice touch, (certainly no danger of it braking too sharply) and apparently it was news of his choice of motor-pacing vehicle the clinched it for Royce and led to them making that monster chainring. Several of the bikes on Donhou's stand featured disc brakes, and in general there were a lot of road bikes with discs at the show. So we asked Tom about this widespread adoption of disc brakes on road bikes:

“In my mind it makes total sense for this kind of build. You’re not out for ultimate speed or weight saving, you’re just out for a nice enjoyable comfortable ride, to have a powerful all-weather brake just makes perfect sense.” With last year’s Rapha Continental bike acting as a style guide and advert for his skills, is he surprised at people requesting similar builds? How much of what he does is driven by what he wants to do and how much by what the customers want?

“Essentially customers see what you’re doing and want that. So, you are ultimately led by what you do, and they’re led by what you do. If I think somethings right, I’ll say so, but at the same time if they’re happy with that, I’ll build it. It’s a bit of give and take. Sometimes you have to read between the lines a bit to to see what the customer really wants. “I like to work closely with the customer so they get what they want. That’s why they come to a custom builder.” This John Player Special was built for Ian Vince, who wanted a modern steel road bike. So Donhou used an oversized Reynolds 853 Pro Team tubeset with a custom machined 44mm headtube to give the front end stiffness. There’s custom features including the bi-lam head tube and seat tube cluster with with Ian’s initial carved in at the back. 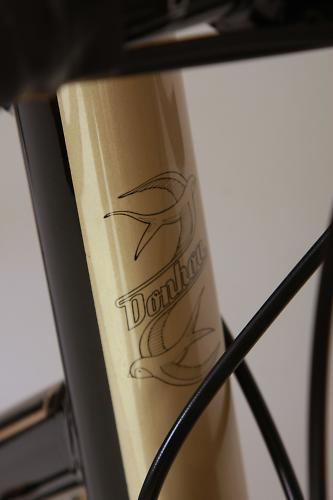 Stay tuned for more from Bespoked Bristol soon. And don't forget you can see Donhou again at Spin London which runs from the 3rd to 5th of May at the Trumans Brewery in Brick Lane. To find out more about Donhou Bicycles visit www.donhoubicycles.com