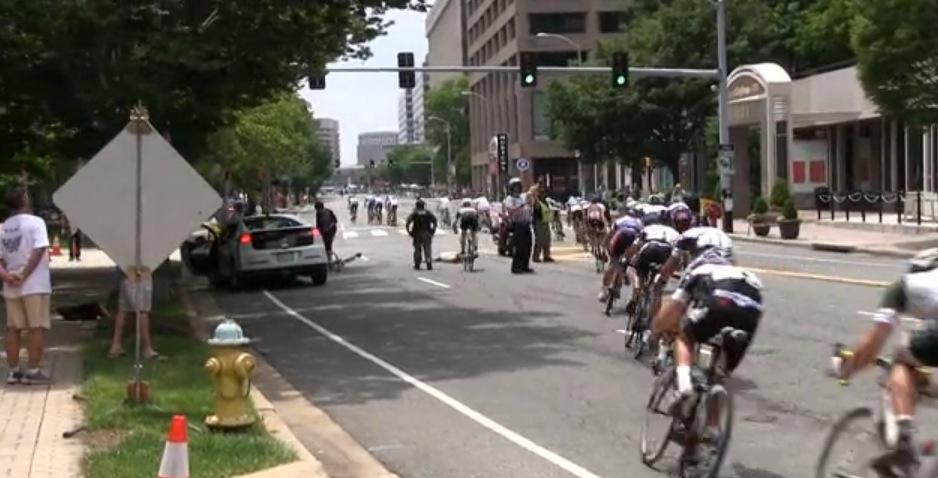 Videos: Big crashes in 2 US races at weekend - one despite rider's warnings on course layout

Racer who came down at Crystal Cup after hitting marshal had raised concerns on course layout; crash at Red Hook Crit too
by Simon_MacMichael

It was quite a weekend for crashes in criteriums in the United States, as these two videos show – the second, from the Red Hook Crit in Brooklyn, New York City, is spectacular. But the first, at the Crystal Cup in Arlington, Virginia raises serious issues about race safety, and what’s more one of the riders involved had warned that the course layout made such an incident likely.

Crystal City from Patriot on Vimeo.

The crash in Sunday’s Crystal Cup race, part of the weekend's Air Force Association Cycling Classic, took place on an out and back section of the course, but one with no segregation between the opposite directions.

Instead, there’s a female marshal standing in the middle of the road, who is trying to get the peloton to move to the left ahead of a left-hand turn so that space is left for the three-man break about to come back down the course.

Out of shot, she’s hit by a rider at the rear of the peloton and knocked to the ground, the rider being catapulted across the road and into the path of the lead car ahead of the break – thankfully, it stops in time. As the peloton returns, helpers on the scene yell at the riders to ‘Go left!’ – unfortunately, in the heat of the moment, what is their left is the riders’ right, and some take the wrong line, including one who hits the marshal (treated later in hospital for minor injuries) and himself comes down.

That rider was Tim Rugg, who wrote on his blog:

This crash is just insane.  For years I've been saying that there would be a serious crash in this out and back section of the Crystal Cup course in the Air Force Classic and of course I fall victim.

What the video doesn't show is a cyclist from the main field clipping the official as the official seen laying on the road tries to clear out of the way to allow the breakaway that has about thirty seconds on the field led by the Volt pace car is about to come through.

The incident is unknown to anyone in the main field and we come out of the final corner of the course upwards of 30mph causing a whip that creates a chain reaction of the riders behind having to accelerate out of the corner to maintain position.

I always took the outside line due to the shield from the draft and of course having no idea the field would have to jump three car lanes right to avoid the chaos the crash caused right in the middle of the course.

Honestly, I don't know how I didn't break anything besides my bike trying to bunny-hop the official, whom I've heard is okay.  I rolled over my handlebars and the instinct to try and bunny hop kept me gripping the bars saving me from breaking a wrist or collarbone. I walked away and got cleaned up in the ER with tons of road rash and a deep gash in my elbow being the worst of my injuries.

There were certainly barriers at the Red Hook Crit - one of the riders involved in a spectacular chute there went flying right over them, together was his bike.

The crash at the evening race, ridden on track bikes at a derelict Navy yard in Brooklyn, came on a corner that from reports we’ve seen was the scene of chutes throughout Saturday’s programme.

One rider goes down on a corner, a second goes wide but hits his bike, a third runs into the back of the first man to fall and somersaults, his bike flying through the air, while that fourth man, trying to avoid those already on the ground, runs into the barriers and is tossed over them.

We haven't seen reports of any injuries, so hopefully everyone - riders and fans alike - got away unscathed.