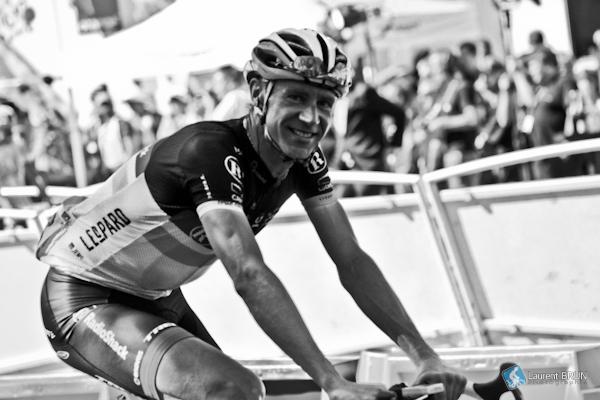 Hard-man hero Jens Voigt on family, drugs, the Tour - and being this year's oldest rider

The oldest man in this year’s Tour de France, the inimitable 41-year-old Jens Voigt is also the most popular. In an interview with the BBC he demonstrates why with a typical mix of quips, anecdotes and no-nonsense opinion on cycling and his place in it.

This will be Voigt’s 16th Tour de France and probably his last. With his RadioShack Leopard Trek team leader Andy Schleck not expected to reach the podium even by his own team, Voigt may take one last chance to display the hard-man breakaway riding style that brought him Tour stage wins in 2001 and 2006.

While his age makes him a hero to every MAMIL who follows the Tour, Voigt admits that riding at the top level, even as a breakaway specialist and super-domestique is not getting any easier.

“It is the passion inside me that means I keep going,” he told the BBC. “I love what I do and I think I am lucky to do it. When I am riding a quiet country road, I hear the birds singing and think ‘I am in my office now’.

“I can still do my job and be a valuable team member, but it is getting harder. The winter in Germany was long and hard and cold with ice and rain; I came out of it lacking the training miles I needed to put into my legs for this season.

“But I have a wife and six kids at home in Berlin and I cannot just say ‘hey honey, listen I am going somewhere warm for a month to train, you all stay here where it is minus 10’.

Voigt’s career began in earnest with his victory in the Peace Race in 1994. That makes him one of the few riders left in the peloton from what are regarded as cycling’s darkest days of rampant use of performance-enhancing drugs.

Voigt says that he never came under pressure to use drugs even when he was part of the former East Germany’s sports system.

“I was either too young, or not good enough. But there was no dope.”

“I am not an idiot, I know a lot of riders my age have been involved in doping and have been caught,” Voigt told BBC Sport.

“People come to me and say ‘listen Jens, it is hard for us to believe. This rider was as good as you and he has been caught. You are almost the only clean one left’.

“Because of that, it seems logical to them that I have been doping. It is hard to keep defending myself because I don’t seem to be able to prove my innocence. I am just a hard-working guy and, yes, I have talent. Does it really make me suspicious?

“The one thing that stops me from letting that poison my mind are the people that really count - my family and close friends. They know I am clean.

“Cycling has made mistakes in the past but now the quality of controls is so good, it is impossible to use drugs and get away with it. It is never a pleasant moment when someone is caught, but it shows the tests are working and we keep catching the bad riders.

“I believe this year’s Tour will be clean but of course you cannot control every single individual. I try to lead by example and not do any funny stuff. Everything I have won, I earned it.

“I hope I am allowed to say that the reason I am popular is because of the way I am, the way I race and the way I talk. I am just the old-fashioned, reliable guy and people always know I am after one thing: ‘There is Jens. He will go in the breakaway’.”

Speaking of the Tour de France, Voigt’s picks for the podium sum up this year’s favourites.

“Froome is going to win, Alberto Contador will finish second and I think Tejay van Garderen will finish third,” he says.

“Chris just looks like Bradley last year, the same things - he is strong, a dominant rider and a solid leader.

“He is good in time-trials and uphill and he is absolutely the man to beat, with a solid team to back him up too. Yes, Bradley is out but [Team Sky domestique] Richie Porte is looking pretty strong and promising.”