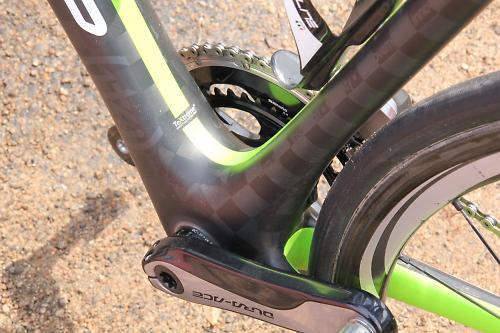 Felt have continued to update the F1, their flagship road bike, over the years, and 2013 marks a big step forward in composites for the frame. They’ve managed to shave a load of weight off by using TeXtreme Spread Tow carbon, which is produced by Swedish company Oxeon AB. This company regularly works with F1 teams so you know it’s bang-up-to-date stuff. 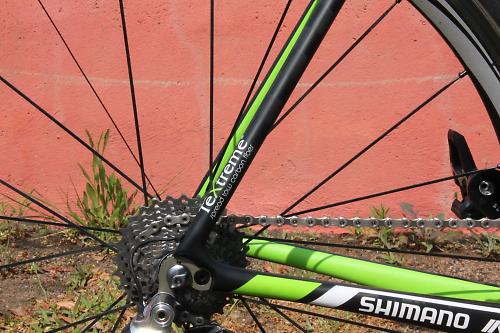 TeXtreme Spread Tow carbon features interlacing tape, rather than yarn, an arrangement that allows for thinner wall thicknesses in the frame, with the same level of stiffness as the previous generation model. It also produces less crimping and wrinkles on the inside surface of the frame, a cleaner and smoother finish that contributes to the weight loss. The result of using this new carbon is a 750g claimed frame weight. That makes it one of the lightest frames in the peloton. 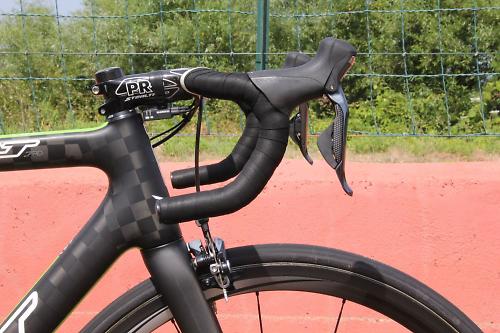 This carbon produces a cool checkerboard pattern that is clearly visible across the frame. Felt have given the frame all the trappings of a modern design, such as a tapered head tube, BB30 and internal cable routing. Dropouts at the fork and frame are made from carbon for further weight loss. 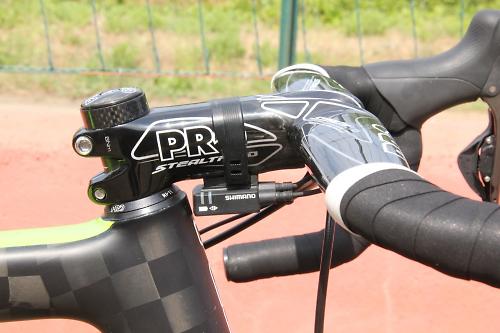 As their team name signifies, the squad enjoy the full backing of Shimano so it’s a full complement of the latest Dura-Ace 9070 Di2 11-speed groupset. The team also use PRO components for the handlebar, stem, seatpost and saddle. Koen de Kort is one of a few riders using the PRO Stealth one-piece carbon handlebar and stem. He has it slammed with just a spacer above the stem, none below it.

We've noticed an increase in the number of riders switching to these one-piece integrated bars in the last couple of years, but it's not clear why. Sagan favours one on his Cannondale, for example. It could be one of those trends that has popped up from nowhere. They do look cool but most riders sill prefer aluminium stems and many go for alu bars too. They want the stiffness and most bikes need a bit of extra weight added to make the UCI's minimum limit of 6.8kg so the cockpit is a sensible place to add back a few grams. 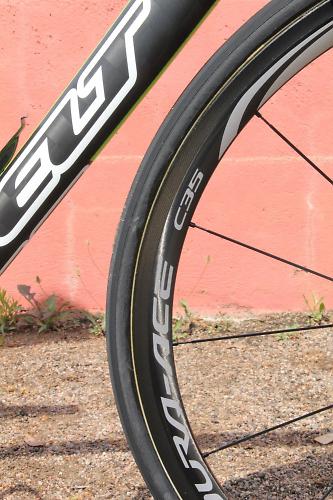 Wheels are Shimano too, and like many riders Koen de Kort is using the C35 tubular. It's a lighter weight option than the C50, and although it's not as aerodynamically efficient, the difference is only small. It's a very good all-rounder and that's why many riders prefer them. 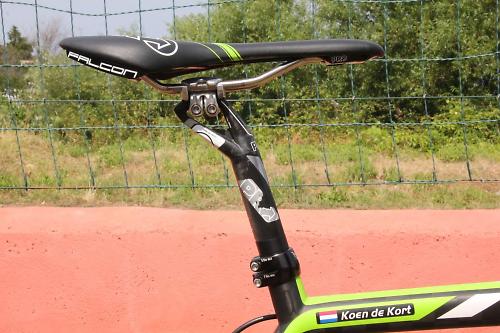 We haven't seen many riders using PRO's new range of saddles, released at the end of last year, but you'd expect to see some on the bikes of a team co-sponsored by Shimano and surprise, surpise here's one. It's the Falcon, and as you can see it's very slim and mostly flat. The seatpost is a PRO carbon item with a twin-bolt clamp design. 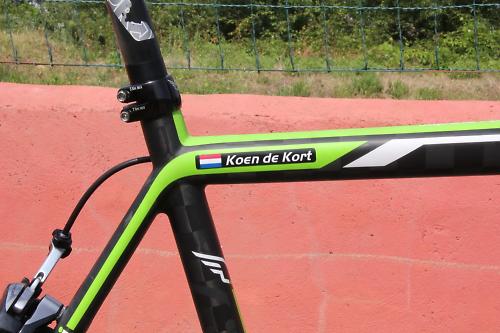