Thomas De Gendt of Vacansoleil-DCM won the award for most combative rider in yesterday’s stage of the Tour de France for his efforts in the breakaway, giving us a good reason to take a close look at his bike.

The 27-year-old Belgian rider, currently sitting in fourth place in the King of the Mountains competition, is riding Bianchi’s new Oltre XR2. 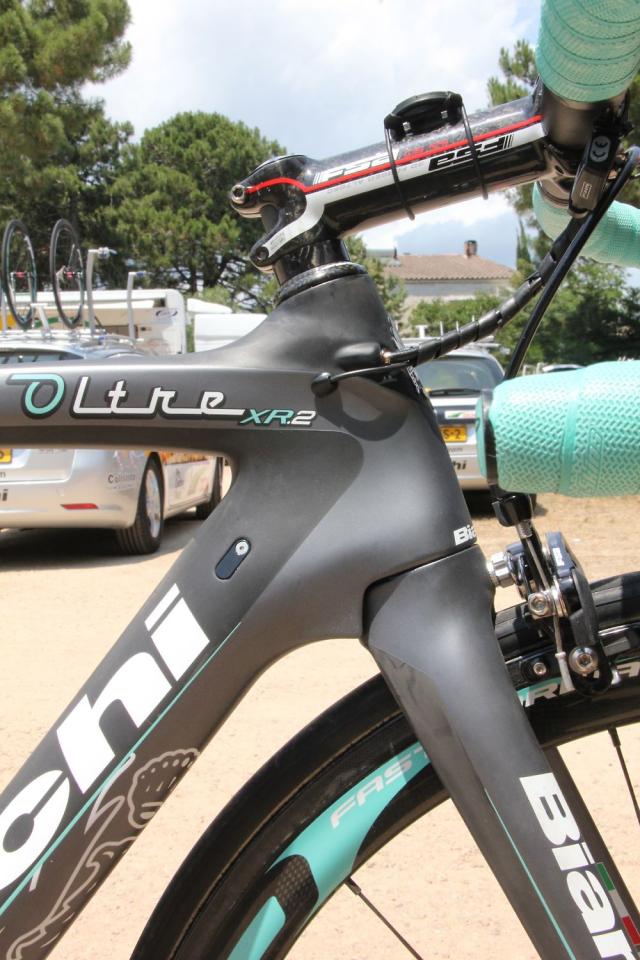 We were out in Italy at the launch of this bike last month. According to Bianchi, it is (of course) a little lighter than the original Oltre XR, at 895g for a 55cm model. It’s made from UMS40 and CN60 ultra high moduls carbon fibre and is built with a BB386 bottom braket and a tapered head tube (1 1/8in up top, 1 1/2in down below).

The seatpost is designed with an aero profile while the clamp sits flush with the top tube to keep the airflow smooth. Bianchi have also integrated the fork crown into the down tube/head tube. In other words, that area has been shaped so that the fork crown doesn’t extend the size of the bike’s frontal area.

Bianchi give the Oltre XR2 what they call ultra thin seat stays (UTSS) to allow a degree of vertical flex back there in order to add comfort.

We rode the Oltre XR2 for a couple of hours and can tell you that the frame is very stiff; this is a highly efficient race bike – as you’d expect of something used in the Tour. 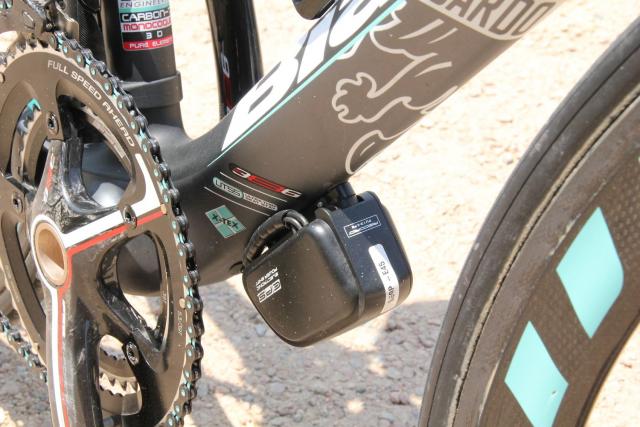 Thomas De Gendt’s bike comes with Campagnolo’s top-level Super Record EPS electronic shifting (we saw a lot of team bikes sporting next-level-down Record), the battery mounted on the down tube just in front of the bottom bracket. Campag are currently working on a battery that will be stored inside the frame in future. If you’ve not used EPS, it’s ergonomically very similar to Campagnolo’s mechanical systems in that you control gear changes with a shift lever behind the brake lever and a button on the inner face of the lever body. Campag have even engineered in a little ‘click’ so that it feels like a mechanical groupset when you change.

The full-carbon rims are from Dutch brand FFWD (Fast Forward). That looks like a 45mm deep F4R on the front there, and a 60mm-deep F6R on the back. De Gendt’s rear wheel is built around a PowerTap hub, CycleOps being one of Vacansoleil’s sponsors. This is quite unusual in the pro peloton; most of the teams use SRM to measure their wattage. 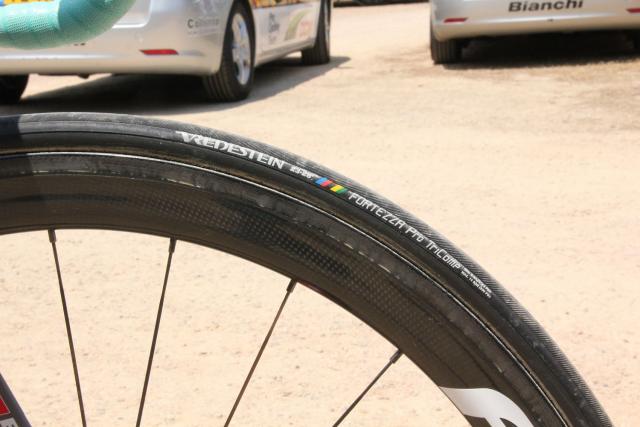 The tyres are Fortezza Pro TriComps from Vredestein. These are tubulars but we’ve reviewed the clincher version in the past and our man Dave said they were fast rolling and sure footed… which is probably what you want when you’re racing the Tour. 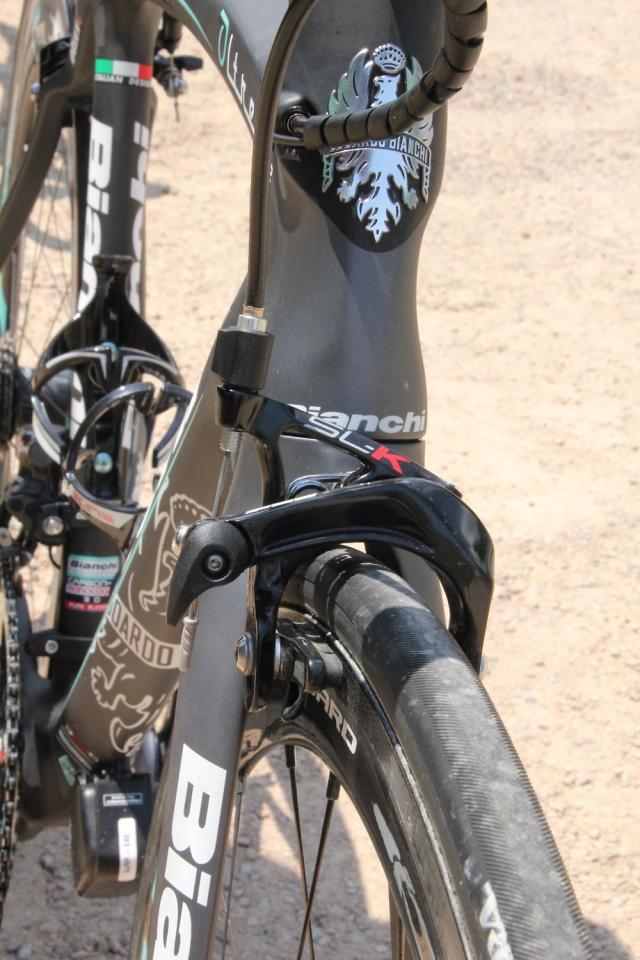 De Gendt’s brakes are from FSA but, as you can see, these are second tier SL-K calipers rather than top-level K-Force. The difference is that the SL-K ones have stainless steel hardware and alloy pad holders while you get titanium hardware and carbon pad holders with K-Force, and a weight that’s about 40g lighter.

We’re not sure why De Gendt is using SL-K. It could be that this is his reserve bike or it could be that he doesn’t need to save as much weight as possible because of the UCI’s minimum bike weight limit of 6.8kg. 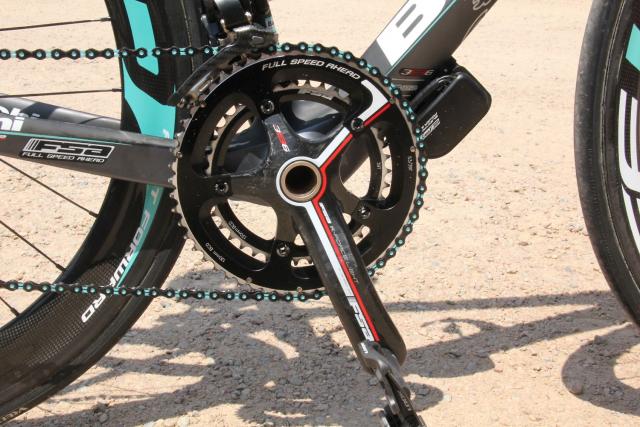 De Gendt does go to the K-Force range for his chainset. The crank arms are hollow carbon and those are standard 53 and 39-tooth chainrings on there. Check out the Bianchi celeste inner plates of the chain, by the way. That’s a cool touch. 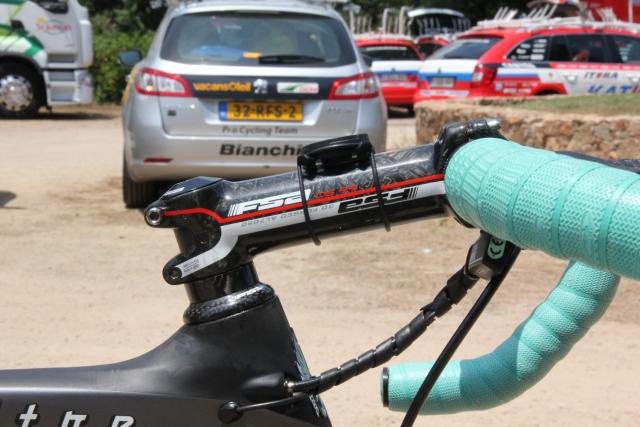 That stem is FSA’s OS-99 CSI model in a 130mm length. That’s about average among the pros. It’s forged and then CNCed aluminium with a carbon skin over the top. Not that many pros go for full carbon stems. Most slam the stem right down but De Gendt runs a single headset spacer to get the front end height he’s after. From the front you can see that the mechanics have marked the handlebar relative to the stem’s faceplate so that they can easily get the position right when setting up the bike.

The super-sticky Lizard Skins bar tape is matched to the celeste details on the frame, fork, wheels and saddle… and those chain plates. 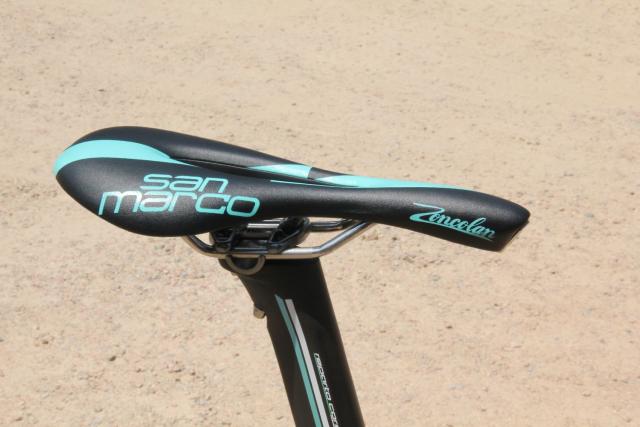 Speaking of the saddle, it’s a Selle San Marco Zoncolan Racing Open with a hole in the centre designed to relieve pressure in that area. There is a carbon railed version of this saddle but this one has rails made from San Marco’s Xsilite material. It’s strong stuff and, again, it could be that there’s no great need for De Gendt to go for the lightest option.