We’ve been riding the brand spanking new Bianchi Oltre XR2 today and can tell you that it’s one super-rigid racing machine.

We’ve already told you the theory behind this addition to the Bianchi road range for 2014 but, just in case you need it, here are the main points again. This calls for the use of bullet points (I’m away from home and out of control). • This is an update of the existing Oltre XR, Bianchi’s top-end, full-on, fast-and-it-knows-it road race bike.

• It has a new fork with a down tube integrated design for improved aerodynamics (the weight is 355g).

• It comes with Bianchi’s UTSS (ultra thin seat stay) back end to provide comfort while transferring power as efficiently as possible.

• You get a full-carbon aero seatpost in different lengths and setbacks, depending on the frame size.

• There will be a SRAM Red disc brake-equipped version called, logically enough, the Oltre XR2 Disc… But we didn’t get to ride that one.

• It’s compatible with both mechanical and electronic shifting.

I hope you enjoyed those bullet points as much as I did. If you want more info, the original story is just a click away. It’s brilliant. So, we told you all that before. road.cc sent a crack team of highly-trained international bike journalists – me and Tony – to ride the Oltre XR2 in northern Italy and here’s what we found…

When Bianchi said they’d made the Oltre XR2 super-stiff, they really weren’t kidding. That’s the main thing I took away from our ride yesterday. You notice this rigidity most around the bottom bracket. Rather than shunting off left and right when you chuck your thunderbolts at the pedals, the central section of the frame remains very stable.

I’m pretty large by cyclists’ standards and I wasn’t able to make the BB sway to any perceptible degree. I did a whole bunch of out-of-the-saddle sprints at the end of our ride (while waiting to do the photography with Tony, who had taken a wrong turn and ended up in Poland or Mongolia or somewhere) and the bike was staying remarkably inflexible despite my best efforts to bend it out of shape. It’s a similar tale at the front end. I have some long levers and swing bikes yards in each direction when climbing out of the saddle, but there was very little flex here. Virtually none. We did a whole bunch of fast, downhill hairpins too, and the Oltre XR2 coped fine, ending up exactly where I fired it every time. It’s very easy to live with in that respect.

Any areas in which the Oltre XR didn’t shine so brightly? If I’m being critical, I’d say that I’ve ridden bikes that have felt a little more hungry to accelerate. Not many, admittedly. That said, this is only an initial impression and I’d want to ride the bike for a longer time and on familiar roads to make a solid judgment on that. 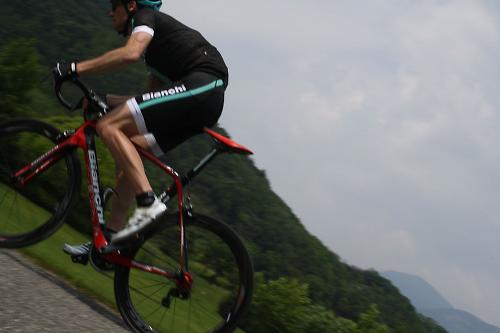 In terms of comfort, the Oltre XR doesn’t feel as plush to ride as Bianchi’s Infinito CV - although that’s not really a fair comparison. The Infinito is designed specifically to take the buzz out of the road – it’s one of it’s key characteristics. The Oltre XR doesn’t do that to the same degree. I’m not saying it’s an uncomfortable bike – it isn’t – but if you’re after something that isolates you from the road, the Oltre XR ain’t it. You get plenty of feedback here. 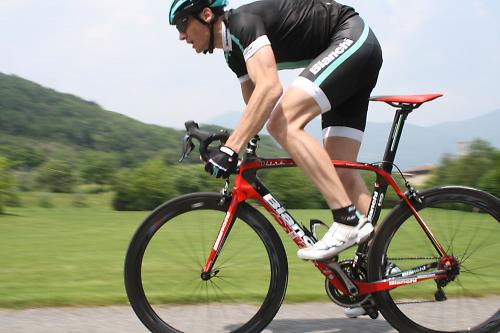 That’s about all I’m comfortable saying for now. This is by no means a full bike review, it’s a First Ride and these are just initial impressions. I rode the Oltre XR2 for, ooh, all of 2:30hrs. That took in a few ups and downs and one significant climb of about 25mins, something like that, and the descent back down. Then I did a whole bunch of sprints. So, it was varied ride, but not all that long and, of course, on unfamiliar roads. Tone did a bit longer, but that's cos he got lost and went a bit off piste. 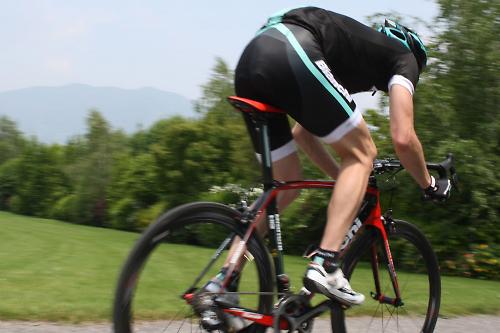 All-in-all, though, those early impressions are really positive. Bianchi were trying to add rigidity to an already very stiff and lightweight race bike, and that’s exactly what they’ve done.

1
Christoph Strasser rides more than 1,000 kilometres in 24 hours to smash world record
2
Five cool things coming soon from Prime, Le Col, Smith, Elite and Galibier
3
Near Miss of the Day 614: “Maybe he actually needs to put me in the hedge” asks cyclist as police send warning letter to close pass truck driver (includes swearing)
4
Two cyclists killed days apart while riding in time trials
5
Motorist who nearly hit cyclist then claimed he wasn’t driving jailed thanks to rider’s video
6
Near Miss of the Day 615: Driver cuts up cyclist ... to park on segregated cycle lane
7
THREE chances to win an absoluteBLACK HOLLOWcage for your Shimano rear mech worth £519!
8
Deliveroo cyclist filmed riding on busy motorway after sat-nav 'took him on the wrong road'