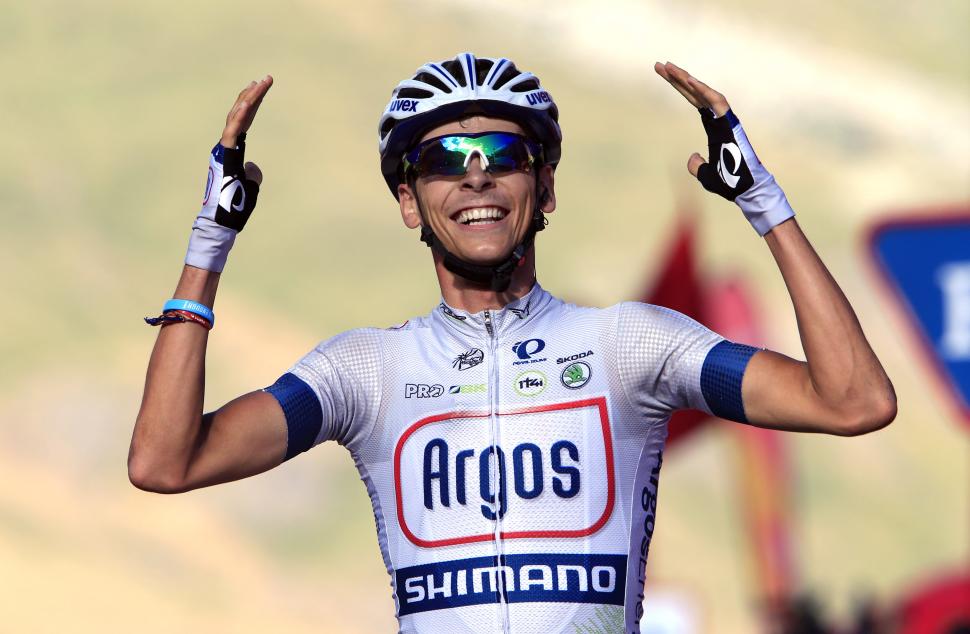 Argos-Shimano's 21-year-old French talent, Warren Barguil, just held off a late challenge from Team Sky's Rigoberto Uran to win his second Vuelta stage in 4 days, beating the Colombian to the Stage 16 summit finish on the Sallent de Gállego by the width of a tyre. Meanwhile, race leader Vincenzo Nibali found himself isolated from his Astana team mates and in trouble late on that final climb, with RadioShack-Leopard's Chris Horner, second overall, clawing back almost half the 50-second deficit he had this morning - he's now 28 seconds behind Nibali.

Uran and Barguil had been in the day's break, initially comprising 23 riders, with both making the selection as a five-man group splintered off the front with around 20km of the 146.8km stage from Graus remaining.

Barguil then attacked solo with around 9km left, but with the 21-year-old Frenchman apparently suffering from cramp, Uran battled back to reach him just ahead of the flamme rouge which signified the start of the final kilometre.

Dominik Nerz of BMC Racing and NetApp-Endura's Bartosz Huzarski also got across to the front pair, but it was Uran and Barguil who battled it out for the stage win, the Argos-Shimano man following the Sky rider's move and overhauling him right on the line that marked the summit of today's final climb.

Barguil, in his first season as a professional and winner of last year’s Tour de l’Avenir, had won Friday’s Stage 13 at Castelldefels after attacking from a strong breakaway group from a little more than a kilometre out.

Today’s victory on a stage that finished on a Category 1 climb proved that was no fluke, and confirmed the youngster from Brittany’s status as one of the most exciting talents in French road cycling.

It wasn’t until more than 60 kilometres had been raced and a number of earlier attacks brought back that the 23-man break that included the day’s winner formed. 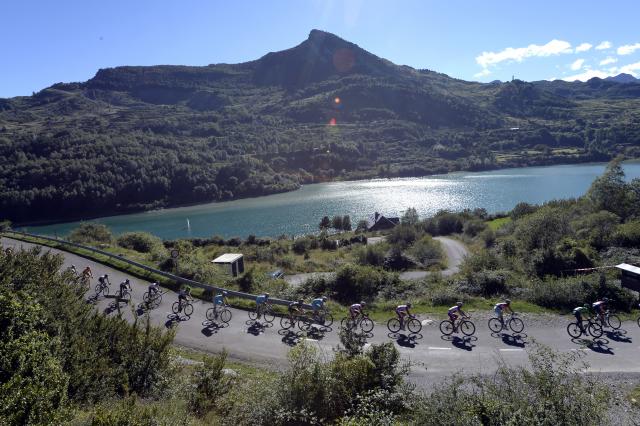 Unlike on Friday, when Barguil, the least heralded of the nine riders contesting the finale that day, sprang what proved to be his winning move with a little over 1,000 metres left, today he decided to go early on the final ascent.

As he fiddled with a shoe with a couple of kilometres left on today’s stage, apparently suffering from cramp, it had seemed that the game was up as Uran pulled back what had been a 30-second deficit with just the last kilometre to ride.

But Barguil fought to get on his wheel and succeeded, and despite Nerz and Huzarski closing rapidly, managed to follow Uran’s sprint for the line and beat him in a photo finish – although from his reaction on crossing the line, it was clear the Argos-Shimano rider knew he had got the win. Following hs win today, Barguil revealed that he'd been ill yesterday and had in defied team orders to go on the attack this afternoon.

"Today, I was told to stay calm," he confessed. "But I was impatient to go ahead.

"When I was alone in the lead in the final climb, Uran came across and attacked me straight away.

"It was a mental game for me to stay at his contact. For the sprint, I maneuvered him well. It came from my experience of losing a race against [ex-junior world champion] Olivier Le Gac in similar conditions last year.

"It’s been tight. Even with one stage win under my belt, my desire to win was intact. It’s super!"

The enormity of his achievement - two stage wins in his first Grand Tour, at the age of 21 - has yet to fully sink in, however.

"I’m yet to realize that I’ve won one stage at the Vuelta. I don’t believe it. When I’ll go back home, hopefully on Monday – it would mean that I’ve reached my first goal, which is to complete the Vuelta – I’ll realise what I’ve done: two stage wins, or maybe more… I’ll try once more and we’ll see how it goes."

Asked which of the men racing the Vuelta has most impact on him, he revealed: "Quite a few riders impress me, especially Alejandro Valverde because he’s classy, but Thibaut Pinot even more because he starts climbing in the last positions of the group and he finishes at the front. He’s only one year older than me."

There is a rich vein of talent coming through in French road cycling at the moment, and Barguil agreed that the competition between them is healthy.

"Absolutely. When I saw Romain Bardet doing well at the Tour, it motivated me for the Vuelta. The sprinters like Arnaud Démare also give me the impression that I haven’t competed against bad riders as an amateur.

"Now the emulation is also working well inside the Argos-Shimano team. Four stage wins by Marcel Kittel at the Tour have inspired me too. It’s a pleasure to race in a group of young riders with no tension between us. We haven’t had a single argument since the beginning of the Vuelta."

Behind Barguil and the other riders fighting it out for the stage win, the third and final day in the Pyrenees saw Horner and Alejandro Valverde of Movistar, third overall, make up time on Nibali, as did Joaquin Rodrigiuez, fourth on the General Classification.

Valverde had been the first big name among the top overall contenders to make his move on the last climb, but was quickly brought back.

The effort in doing so cost Nibali his remaining team mates, however, and when Rodriguez then attacked, followed by Horner and Valverde, the Astana rider – imperious in clinching the Giro d’Italia in May, and looking to be the first man since Alberto Contador in 2008 to win two Grand Tours in the same year – looked vulnerable.

“It’s been a difficult stage finish for me," reflected the Sicilian following the end of the stage.

"I’ve suffered because of the head wind. I’ve lost a lot in the last two kilometers. I was expecting better but for three days, my team has been working flat out. Controlling the race has taken a lot of energy.

"The red jersey has become a weight on my shoulders," added Nibali, winner of the Vuelta in 2010.

"I feel it since the first day. It’s a very hard Vuelta," he added.

Horner, already the oldest man to win a Grand Tour stage as well as wear a leader's jersey in one of cycling's big three stage races, is now less than half a minute from becoming the oldest rider to win one. Unsurprisingly, he was rather more upbeat than his chief rival.

“It’s a good day. I gained 22 seconds over Nibali. I’m getting closer to the first place. In the finale, Purito [Rodriguez] made all of us suffering. I don’t know if Nibali has had a temporary weakness but if he’s really tired, it brings my morale up.”

With 10 bonus seconds awarded to stage winners, and Horner now just 28 seconds back and Valverde too certainly not out of it, thoughts will turn to two pivotal stages looming in the race’s final days.

Those are a summit finish on the Peña Cabarga on Thursday – just 6km long but packing an average gradient of 9.2 per cent and maximum of 20 per cent – and what looks like a race-deciding ascent of the fabled Angliru on Saturday, 12km at 10.2 per cent but hitting 23.5 per cent at one point.

Nibali's parting shot was a warning to pretenders to the red jersey. "I remain optimistic," he insisted.

"The coming climbs suit me better than today’s. They’re harder.”