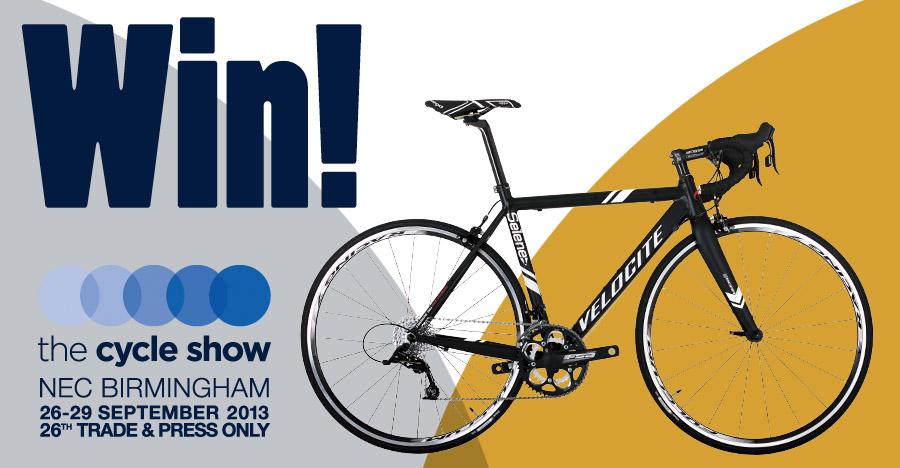 Velocite road bike comp: we have a winner!

Well the Cycle Show is in full swing and it's time for us to make good on our rpomise of giving away a Velocite Selene Tiagra road bike worth £1,100 Did you enter?

If you did you were one of over five and half thousand who correctly informed us that the road test circuit at the show was 750m in length. Plus a handful of people who got it wrong, although we're guessing '3 days' is sort of correct. In a sense. If you don't include the trade day.

Anyway, enough of that. There can only be one winner 'cause there's only one bike. And that winner is none other than Robert Tosh. So a big slap on the back for him. Sadly we didn't have 5,500 bikes to give away, but there are two more cracking bikes to be won on road.cc before Christmas. One's entirely unique and the other kind of is too. You'll see. Anyway, stay tuned!

It's competition time! We've teamed up with The Cycle Show at the NEC to bring you a cracking prize: A Velocite Selene Tiagra road bike worth £1,100!

Velocite describe the Selene as "The best alloy bike and frame bar none", and it's a racy geometry that suits fast riding but it's also comfy enough for long dstances too, according to Velocite. The frame is 7005 cold worked, triple butted aluminium alloy anf you get a press-fit bottom bracket and asymetric head tube for plenty of stiffness when you're stamping on the pedals or belting downhill. That's mated with a Bora S carbon fork and a full Tiagra groupset, save for the FSA Vero chainset. Wheel's are Velocite's own Tenax units. The frame is a Large. For more info on the bike head over to Velocite's website.

Velocite will be at The Cycle Show this year, along with a host of other brands. It's being held at the NEC in Birmingham and it's open to the public from Frisay 27 September to Sunday 29 September. Entry costs £13 for adults (£16 on the door) but you can save £1.50 on your ticket by using the discount code RCC when you book.

There's loads going on at The Cycle Show as well as just the chance to ogle some shiny bikes: There's road, MTB, kids' and urban test tracks, a BMX arena, roller racing, a massive airbag for you to practice your flips and tricks, the Onza trials team and  an inclusive cycling hub including companion cycles, wheelchair tandems, handcycles and therapy tricycles. For all the info, head over to The Cycle Show website.

To be in with a chance of winning the bike, just answer this simple question:

How long is the road test circuit at The Cycle Show?

Answers on a postc... actually, just fill in the box below. We'll pick a winner on the Friday the show opens. Good luck!