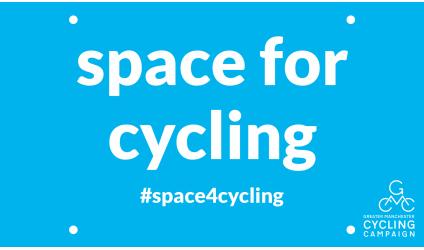 Cyclists in Manchester, currently hosting the Conservative Party Conference, are being urged to come along to a Space for Cycling ride this evening to lobby for more room for cyclists on busy roads and at junctions, as well as lower speed limits and traffic volumes.

The ride comes hours after Transport Secretary Patrick McLoughlin’s speech to conference made only passing reference to cycling.

Greater Manchester Cycling Campaign says it wants “as many people as possible” to join it on the ride, which starts from St Peters Square at 6.30pm, with riders arriving half an hour earlier. A Facebook page has been set up here.

To begin with the ride, which will have police support plus two bike mechanics as well as a first-aider, will take to the closed roads around the Manchester Central Convention Complex, before heading to Manchester Town Hall, Market Street, the Northern Quarter and Piccadilly then back to St Peter’s Square.

It is anticipated that the ride will finish at 8pm and participants are advised to bring their bike lights.

GMCC’s Space for Cycling campaign builds on the eponymous initiative launched recently by London Cycling Campaign, which has been picked up by other groups throughout the country.

At lunchtime today, GMCC was due to present a petition calling for “dedicated space for cycling on busy main roads and junctions” and “reduction of motor vehicle volumes and speeds on smaller roads” to Dr Sarah Wollaston MP, treasurer of the All Party Parliamentary Cycling Group.

Copies of that petition will also be given at this evening’s ride to Stephen Phillips MP, Director of the Conservative Party, Councillor Chris Paul, the Cycling Champion at Transport for Greater Manchester Committee, and Councillor Nigel Murphy, Executive Member for Environment, Manchester City Council.

Meanwhile, Secretary of State for Transport Patrick McLoughlin, addressing the Conservative Party Conference this morning, made only passing references to cycling in his speech this morning, in contrast to his shadow counterpart Maria Eagle who outlined Labour’s plans for cycling at her party’s conference last week.

The Conservative Party’s coalition partners, the Liberal Democrats, also outlined their commitment to cycling at their own conference earlier this month.

Mr McLoughlin highlighted investment the government had made in a number of areas such as Crossrail and motorways, where he said 400 miles of extra lanes were been put in.

He added that there is growing demand for transport, “From the biggest to the smallest - from huge new container ships, to more people on bikes backed by this government, investing more in cycling than ever before.”

Those figures were queried by Ms Eagle last week, who said that on an annual basis they were less than the £60 million the previous Labour government provided to Cycling England.

Mr McLoughlin added that he was regularly asked for “Wider roads, better buses, cycle lanes” and “more trains,” and claimed, “We’ve made a terrific start.”

With the government having given what was widely viewed as a disappointing response earlier this month to the APPCG’s Get Britain Cycling report, some listening to Mr McLoughlin’s speech might see the inclusion of those references to cycle lanes as more of an afterthought than anything else.

Flagging up more than £70 billion long-term investment in transport announced earlier this summer – of which, cycling at current spending levels will receive only a fraction of 1 per cent -  he outlined that the government had trebled spending on major road schemes.

He also spoke at length about his and the government’s support for the controversial HS2 rail line, saying that project, and others, would help Britain remain competitive against other countries .

Cycle infrastructure, it seems, has a part to play in that.

“Now - I don’t like to go on about that word ‘vision’,” added Mr McLoughlin.

“So that the United Kingdom can compete - and win against world competition.

Missing though from the speech Mr McLoughlin delivered is any reference whatsoever to road safety – which, when it comes to cycling, is the single biggest factor behind calls for more infrastructure, and is the reason for the Space for Cycling ride being organised in Manchester this evening.