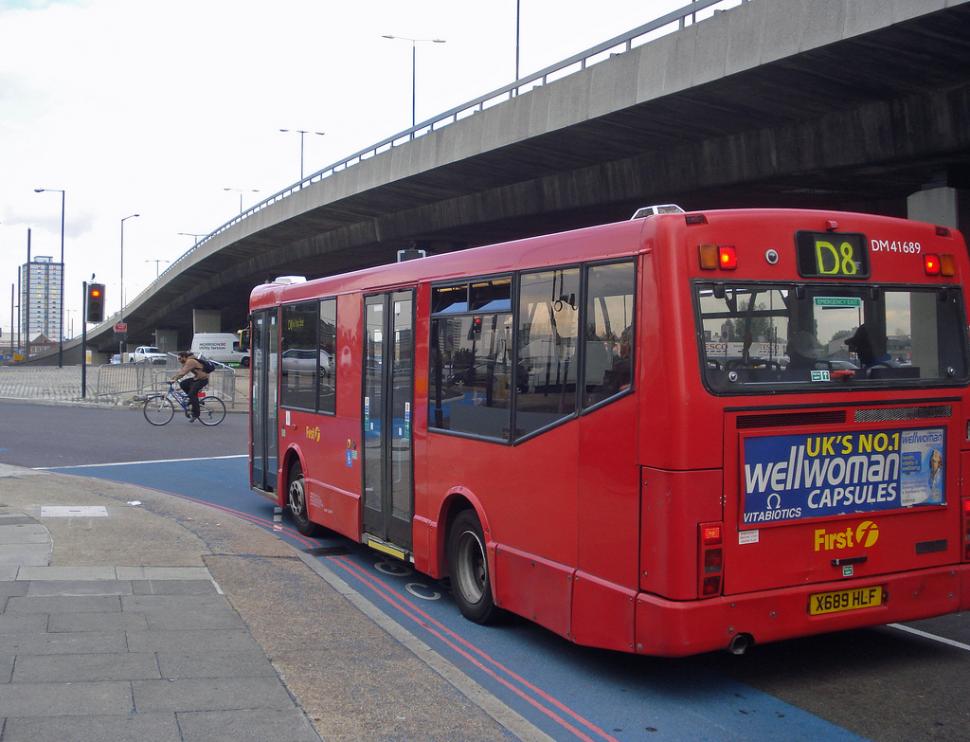 Coroner describes Bow junction as "an accident waiting to happen"...
by John Stevenson

The credibility of non-segregated bike lanes like London’s infamous Cycle Superhighway 2 took another blow today when a police crash investigator told Poplar Coroner’s Court that the route along the A11 had no legal standing but was “just blue paint.”

According to the Evening Standard, PC Alex Hewitt was speaking at the inquest into the death of Brian Dorling who was crushed to death by a tipper truck at Bow roundabout on October 24, 2011.

Mr Dorling, 58, was on the way to work at Olympic Park when he was hit by the McArdle truck, driven by David Cox.

After examining CCTV evidence and pictures of the site, Coroner Mary Hassell said: “It just seems to me that it’s an accident waiting to happen if cyclists are guided into the space where blue paint is on the left and they’re in the very place where the lorry is going to hit them. It seems like they’re being guided into the place where they’re most vulnerable.”

PC Hewitt was asked what status the cycle superhighway had.  He replied: “Legally nothing. It’s just a piece of blue paint.”

The court heard that Mr Dorling found himself alongside the truck after the bike lane had been blocked by a bus.

Mr Cox told the inquest that he simply hadn’t seen Mr Dorling. “I have thought about it a million times since,” he said. “I know I was looking. I know I was. I can’t change anything unfortunately.”

In July, Mr Cox was found guilty of causing death by careless driving and sentenced to 24 weeks in prison, suspended for a year. Brian’s widow Debbie Dorling said at the time: “You can see he’s remorseful and see that he’s haunted. He is a broken man. Putting him in prison is not going to achieve anything.”

Brian Dorling was the first cyclist to die on one of the Cycle Superhighway routes. Less than three weeks later 34-year-old Svitlana Tereschenko was killed by a tipper truck at approximately 4.45pm on the evening of Friday, November 11.

The inquest into Ms Tereschenko’s death returned a narrative verdict.  Deputy coroner Dr Shirley Radcliffe ruled that Ms Tereschenko died "as a result of traumatic road death". Although the driver, Gurpreet Shergill failed to indicate and was talking on a mobile phone at the time, Dr Radcliffe went on to conclude "that nobody is to blame".

The two deaths led to improvements to Bow roundabout, including the fitting of advance traffic lights to allow cyclists to move off ahead of dangerous motor vehicles.

London Cycling Campaign had warned before Cycle Superhighway 2 was built that routing cyclists through Bow roundabout was extremely dangerous, and that the rest of the route, largely an intermittent blue stripe on the road was totally unfit for purpose.

After the deaths of Mr Dorling and Ms Tereschenko it emerged that in the planning of Cycle Superhighway 2, Transport for London had ignored recommendations from the civil engineering firm, Jacobs Consultancy to install traffic signals specifically for cyclists and pedestrians, as well as separate cycle tracks.

When Cycle Superhighway 2 was being constructed, it was originally planned to run all the way from Ilford to Aldgate. The London Borough of Newham was widely criticised, including by this website, for citing safety as grounds for postponing the building of the section beyond Bow. That refusal now looks remarkably prescient, and the eastward continuation of CS2 now being built is far better segregated from motor vehicle traffic than the first phase.