We showed you the brand new AiR/TTE time trial/triathlon bike last month, so head back to that story for all the details on that distinctive machine, including a video. We’ve also shown you Boardman’s more affordable 2014 Performance range. But yesterday evening Boardman showed us the rest of the Elite bikes, and there are a whole bunch of interesting models… 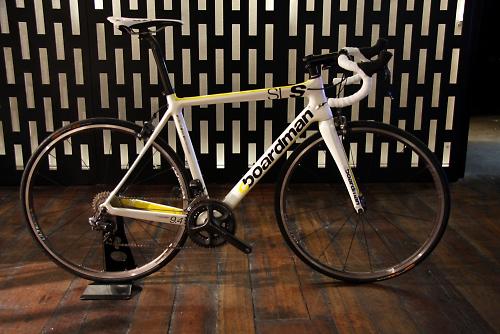 Let’s start with the all-new SLS bikes – SLS being the Superlight Endurance Series. These bikes are designed to combine comfort and performance for sportive riders, or just for getting in the big miles quickly. 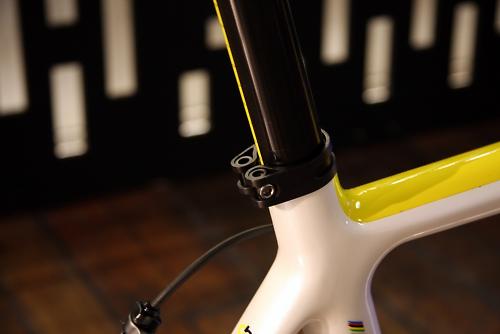 The SLS frame is full high modulus carbon fibre with a PF30 bottom bracket and oversized box section chainstays, the idea being to provide highly efficient power transfer. The head tube is tapered, the cabling is fully internal and, like that of the rest of the range, it’s compatible with both mechanical and Di2 systems. The fork is full carbon too, weighing in at a claimed 360g. 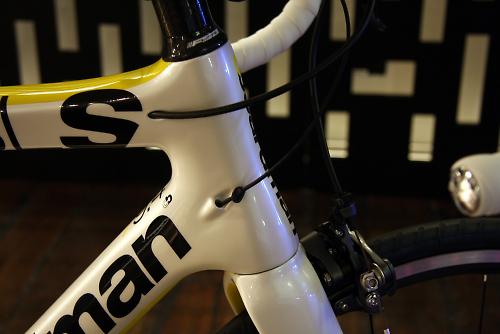 In terms of geometry, the medium model comes with a 555mm top tube and a 160mm head tube. That compares to a 555mm top tube (the same) and a 140mm head tube on Boardman’s SLR frame (see below). The medium SLS’s stack height is 562mm and the reach is 390mm. The equivalent figures for the SLR are 543mm and 394mm. In other words, the ride position of the SLS is slightly shorter and quite a bit higher at the front end; it’s less extreme. We’ll stick with the road bikes and head to the AiR bikes next: AiR being Aerodynamic Racing. You get the idea of what these bikes are about from the name: they’re designed to be slippery through the air. The new AiR frame, which is full high modulus carbon fibre, has aero tube profiles and fully internal cable routing. You also get a PF30 bottom bracket, oversized chainstays, and a tapered steerer, like you do on the SLS bikes.

The top level AiR/9.8 also comes with a front brake that’s integrated within the fork to further improve the aerodynamics, while rear brakes are mounted underneath the chainstays across the board. 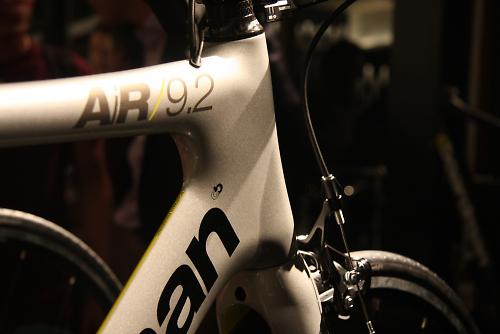 The AiR bikes feature a four-position seat post clamp so that you can effectively alter your seat angle. Rather than flipping the seatpost, you move the position of the clamp forward/backward on top of the post. It looks like a pretty neat design. This will be particularly useful if you want to fit clip-on tri-bars, for example, and need to get your riding position dialled. The AiR is available in six different builds, the most affordable being the Shimano 105-equipped £1,999.99 9.0. This one comes with Mavic Aksium wheels. Where next on this whistle stop tour? Let’s head over to the SLR bikes, SLR being – have a guess – Superlight Racing. I say ‘bikes’ but the SLR is actually only available as the SLR/9.8 frameset in the UK. There are a couple of built-up models but you can only get them overseas so we won’t go into any depth on those (I know this is the worldwide web but time is precious this morning). 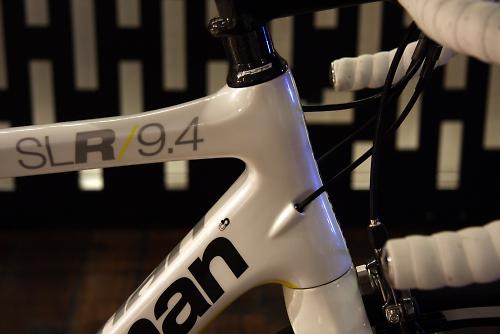 So, the SLR/9.8 frameset… Clearly, the SLR is designed to be the light one in the range (when it comes to road bikes, you’ll have noticed that loads of brands now have the light one, the aero one, and the endurance one, and Boardman are no different). Boardman claim a frame weight of just 798g with 360g for the fork. Those are some seriously light figures.

As with the other road bikes we’ve mentioned, the SLR frame is full high modulus carbon fibre with a tapered head tube and a PF30 bottom bracket, and all of the cabling is internal. The fork is full carbon too. The SLR/9.8 frameset is priced at £1,399.99. 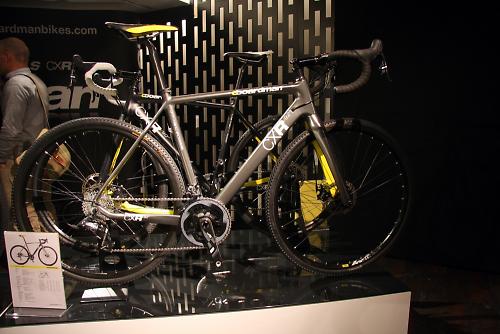 Next up, the CXR bikes… CXR being Cyclocross Racing (you’re getting the hang of this now, right?). The CXR range includes two carbon fibre models and one aluminium model, all of them disc-brake equipped. 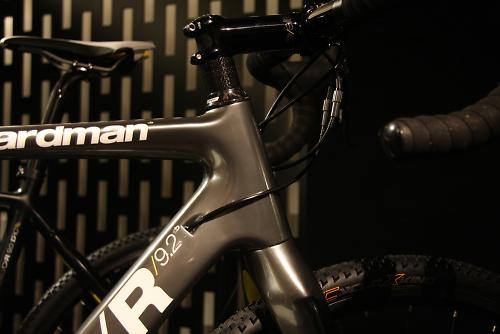 So, let’s start at the top. The CXR/9.8 is a full carbon monocoque with a PF30 bottom bracket and oversized box section chainstays. Those chainstays are asymmetric to handle the disc brake. The cabling is internal and the front fork is carbon too. 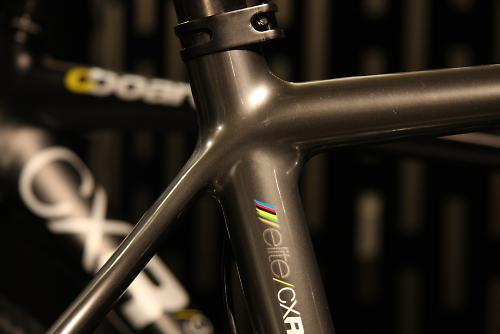 Boardman reckon the CXR bikes are fully race capable although each of the bikes is compatible with mudguards and a rear rack to keep your options open. 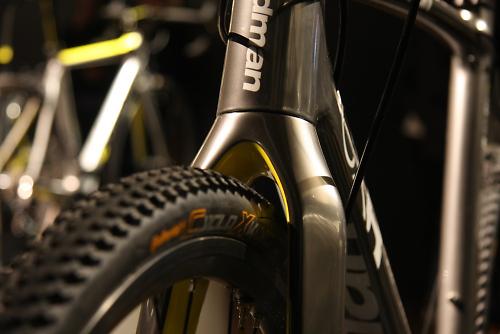 The CXR/9.0 (£1,599.99) is the aluminium model although you’d do well to spot that immediately because it features Boardman’s signature smooth welds. That frame is triple butted while the Boardman Elite CXR fork is full carbon. 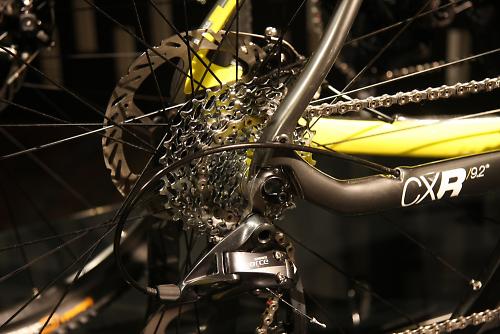 The CXR/9.0’s fork, components and geometry are exactly the same as those of the 9.2, it’s just the frame material – and the price – that are different. 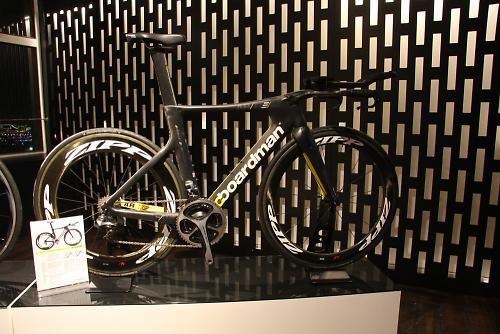 Finally, we have the time trial/triathlon bikes… The big news here is the AiR/TTE that we’ve already shown you. 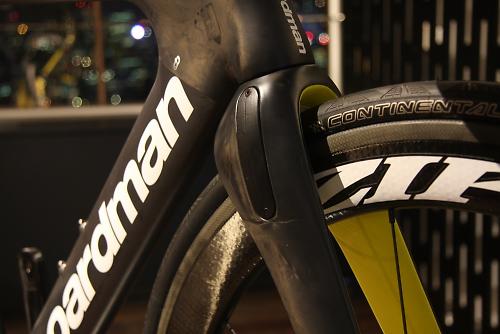 Boardman say that this bike, “Has been designed using the latest Computational Fluid Dynamics technology and wind tunnel testing, resulting in an incredibly fast, super aerodynamic frame platform which has a 5% increase over the Kona winning AiR/TT." 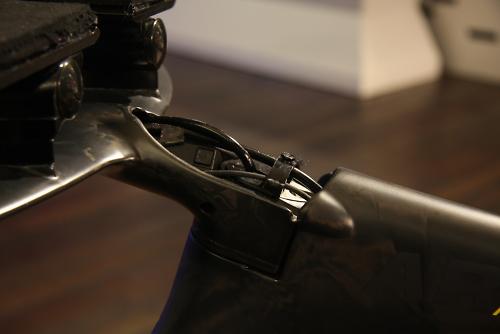 That Kona reference is to Pete Jacobs’ win at Ironman Hawaii in 2012. The team have been back in the wind tunnel at Southampton earlier this week and they say that the results are actually a little better than they initially thought.

At a 20° angle of yaw, they actually reckon the drag is 24% lower, and at 8° it's 14% lower. Chris Boardman himself was keen to point out that taking the bike and the rider as a whole, it's the rider that accounts for about 80% of the drag, so the bike improvements will account for only around a 4% reduction in the drag of the complete package. Once you take frictional loses into account, the figure is about 3.3%. Refreshingly honest! 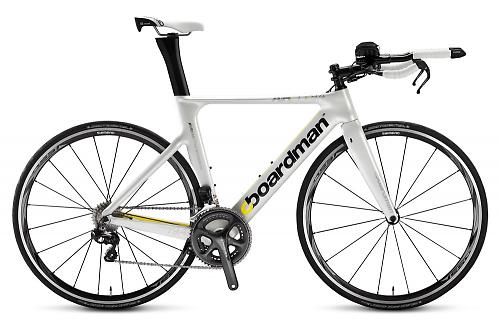 The previous time trial model has been modified for 2014 although the frame is essentially the one that Pete Jacobs won Hawaii on with slightly altered shaping around the seat tube/top tube junction to incorporate an internal wedge-type seatpost clamp, rather than an external one. The fork has been redesigned and now comes with deeper legs. 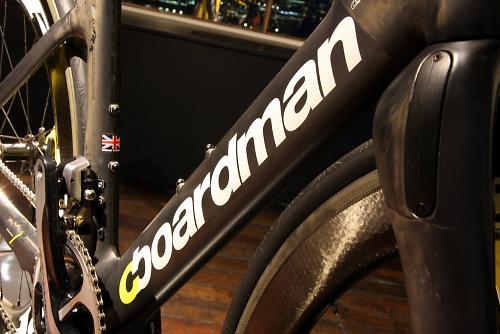 The Ultegra level model, the 9.2, is £2,799.99, while the 9.4 Di2 (£3,499.99) comes with Ultegra Di2. The Shimano RS31 wheels specced on both are perfectly serviceable, but it looks like Boardman really expect you to have your own preferred race wheels already.

We had the chance to speak to Chris Boardman himself about the range and a few other tech matters, so stay tuned for that interview. In the meantime, you can get more details on the Boardman Elite range from www.boardmanbikes.com.