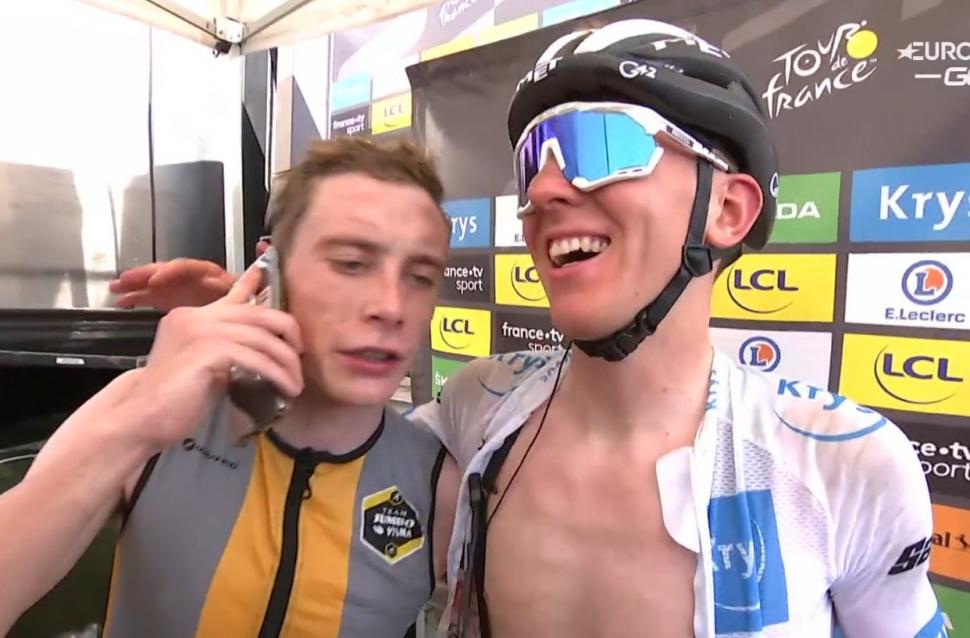 Warm down rollers, ice baths, ultrasound therapy, shots of Jack Daniel’s, fridges full of blood bags… Pro cyclists down the years have used an impressive variety of recovery methods to ensure they’re at their very best (or even beyond their best) at the grand tours.

Ahead of this afternoon’s penultimate Tour de France stage, a 40-kilometre individual time trial from Lacapelle-Marival to Rocamadour, I’m not sure how keen Jonas Vingegaard and Tadej Pogačar will be to avail of the latest marginal gain, however.

Stripchat – the leading adult webcam platform, I understand (I read that… somewhere) – has offered the dominant duo of this year’s Tour de France a, shall we say, interesting method of preparing for the race of truth.

> What do pro riders do on Tour de France rest days?

The offer, sent by the company’s vice-president Max Bennett, smartly focuses on optimum relaxation and sleep, the key tools of recovery for a grand tour contender.

It reads as follows (brace yourself for an uncomfortable amount of tenuous cycling-related innuendoes):

I’ve been following your battles across the French countryside, watching you go neck and neck throughout the many stages of the race. It has inspired us to up our own stamina for long rides if you know what I mean....

As fans of endurance, stamina, rides, and cycling in general here at Stripchat – the leading adult webcam platform with 500 million monthly users – we would like to extend you both an offer of VIP access to our platform and $6,900 in tokens (each) to use to relax the night before the final leg and get a good night's sleep. We have one of the largest model bases and a large variety of women and men for you to choose from.

We want you both at the top of your game as we near the close of this epic battle and our beautiful models are waiting and eager-to-please!

I think I’ll stick to the post-race massage, Tupperware chicken, and a good book, thanks Max…

Of course, Stripchat’s belated foray into athletic recovery isn’t the first time this year that the adult entertainment industry has taken an interest in pro cycling.

When the 35-year-old took to the podium, she was presented not only with the leader’s jersey but with a giftset from the race’s title sponsor EasyToys which included, among other things, a satin blindfold, Kama Sutra playing cards, a sex toy and so-called “play socks”.

Considering that her former rival Jolien D’Hoore was given a vacuum cleaner after winning the Ronde van Drenthe in 2015, it’s perhaps no surprise that van Dijk took to Twitter to joke that “prizes in women’s cycling are improving”.