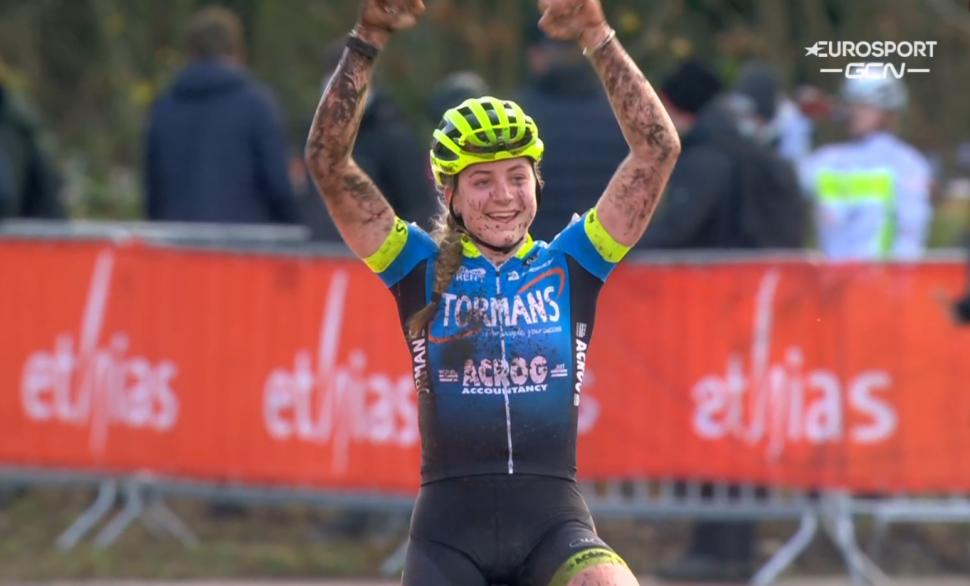 Junior road world champion contracted the virus after an impressive elite podium place on Tuesday, and joins Tom Pidcock on the absentee list for the Crawley event
by Ryan Mallon

The Welsh wunderkind was due to compete in Sunday’s elite women’s race after a blistering season in both the junior and senior ranks. But the 17-year-old announced on her Instagram page that upon returning from a successful stint racing in Belgium, which included a strong third place in Tuesday’s elite race in Gullegem, she tested positive for the virus.

The news means that the championships, held for the first time since 2020 after Covid restrictions forced the organisers to cancel last year’s event, will be missing two of its biggest names: this week Tom Pidcock opted out of defending his British champion’s jersey in favour of a training camp with the Ineos Grenadiers in Mallorca.

“I just wanted to let you know that sadly after returning from racing in Belgium earlier this week, I have since tested positive for COVID 19”, the Tormans rider, who leads the UCI junior World Cup rankings, wrote. “I am so grateful to be feeling fine at the moment and I’m lucky I am able to isolate at home with my family who have also sadly all tested positive.

“Unfortunately this means I’ll be missing Nationals this weekend. I’m gutted as I was really looking forward to competing and was in the best possible shape having prepared fully, but am now isolating as per the guidance and will do everything I can to return to racing as quickly as possible.”

Bäckstedt was one of the favourites for the elite women’s race in Crawley after a spectacular 2021 which included three junior World Cup wins, a junior European championships, and a maiden elite win in Essen in December. Away from the ‘cross field, there was also the not-so-minor-detail of a junior world road race title win in Leuven, Bäckstedt outsprinting Kaia Schmid after a stunning long-distance break.

The national cyclo-cross championships are due to start today at the South of England Showground in Crawley. While no restrictions are in place for those attending the races, British Cycling has advised anyone who has Covid-19 symptoms or is currently required to self-isolate not to travel to the event. Live coverage of Sunday’s junior and elite races will be available on British Cycling’s YouTube channel, GCN+ and the Eurosport Player.