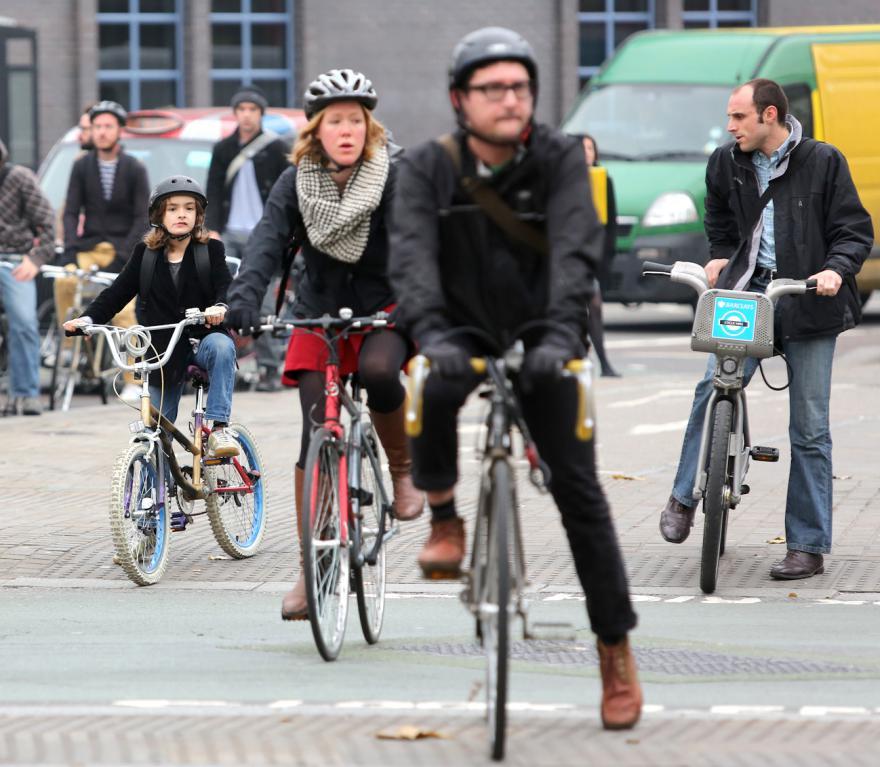 “More people are turning to cycling for shorter journeys to help make ends meet, but they need the safety that dedicated cycle lanes bring,” says Cycling UK
by Ryan Mallon

Cycling UK has blamed the fall in cycling activity in England to pre-pandemic levels on the “short-sighted” decisions of local councils to remove protected bikes lanes installed during the initial Covid-19 lockdown.

According to figures released this week by the Department for Transport as part of its National Travel Survey, the average person in England made only two percent of all their trips by cycling between November 2020 and November 2021, while the average number of trips made by bike dropped to 15, down from a high of 20 the previous year.

The study also showed that the percentage of people who cycle at least once a week for any purpose has fallen from 11.6 percent to 9.1 percent, with the average annual mileage covered by bike dropping by 33 miles to 55 miles (a figure more in keeping with pre-pandemic trends, but still much higher than the 39 miles per person recorded in 2002).

The proportion of adults who say they cycle at least once a month has also sunk to 13.1 percent, the lowest figure since 2015-16.

However, estimates from the DfT based on mobile phone data have already shown that cycling trips are once again on the rise in 2022, with the recent growth attributed to more people reaching for the bike on weekdays, suggesting a surge in cycle commuters. This supports the survey’s 2021 data, which links the drop in cycling levels to a fall in those riding for leisure. While leisure cycling trips fell by over 2.5 percent between 2020 and 2021, the proportion of those cycling for travel only dropped by 0.5 percent.

It must be pointed out, of course, that the DfT’s data only applies to England and comes with the health warning that, due to changes in data collection methodology, changes in travel behaviour and a reduced sample size thanks to the effects of the Covid-19 pandemic, “care should be taken when interpreting this data and comparing to other years”.

Nevertheless, campaigners have blamed the apparent drop in cycling levels on the decisions of some local authorities to deprioritise safe infrastructure after the initial boost in both the number of protected bike lanes and the proportion of people riding their bikes in 2020.

Cycling UK’s chief executive Sarah Mitchell said in a statement: “The pandemic proved more people would cycle – particularly women and children – if it felt safe for them to do so.

“It’s sadly no surprise that last year those cycling levels dropped, as some short-sighted councils began pulling out the protected lanes which kept people safe, and traffic levels rose again.”

According to Mitchell, increased cycling infrastructure “has the potential to bring huge benefits to all of us.

“The short-term benefit is that people will be able to keep making those essential journeys to work, to school, to the shops by bike. The long-term benefits will be improvements to the nation’s health, economy and environment.”

Mitchell also noted that the recent upward trend in cycle commuting in 2022 was perhaps due to the ongoing cost of living crisis.

“Both national and local governments need to learn last year’s lessons and focus on the new crisis: cost of living,” she says. “More people are turning to cycling for shorter journeys to help make ends meet, but they need the safety that dedicated cycle lanes bring.”

Sally Copley, executive director of external affairs at active travel charity Sustrans, also said: “It’s simple. Today’s data shows that if we want more people to walk, wheel and cycle, then the way we get around must be safe, accessible and appealing.

“During the pandemic, when there were fewer cars on the road, the public took to their bikes. It’s sad to see this return to expensive and pollutant car-use, especially as the urgency for alternatives has only increased, alongside the cost-of-living.”

“Government is investing a record £2bn over this parliament to enable more walking, wheeling and cycling through better infrastructure, cycle training and active travel prescriptions,” a Department for Transport spokesperson noted following the publication of the National Travel Survey.

“Though cycling levels have returned from the exceptional levels we saw during the pandemic, we remain fully confident our investment will enable many more people to choose walking and cycling for everyday journeys by 2030.”

Following the survey’s findings, the Guardian has published an article detailing the experiences of readers who say they have given up cycling on the road in recent years.

While some said that their decision to step off the bike was due to an increase in thefts and the health effects of long Covid, most of the respondents blamed the “aggressive”, “abusive” and “dangerous” nature of motorists on the roads.

“I have ridden a bike all my life and have ridden thousands of miles but had a couple of years off,” teacher Helen Simpkin told the paper.

“When I started again just after lockdown it was a truly terrifying experience. With almost no exceptions, all the road users were aggressive and impatient and resented having to share the road. Friends of mine, also experienced cyclists, have had traumatic and life-threatening accidents.

“I know that the Highway Code has changed to give more rights to cyclists but this will make no difference. I will never ride a bike again, my nerves have gone. I will, however, be walking more and using public transport more often.”