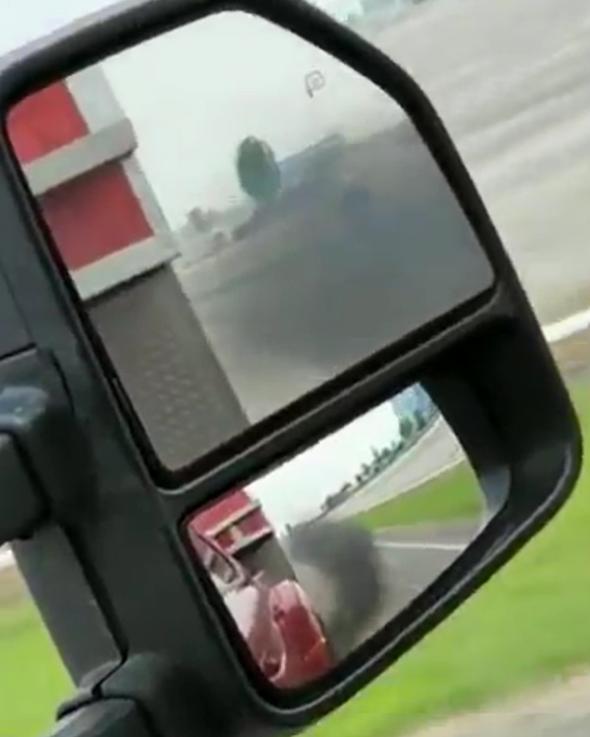 Cyclists in north Texas have called for the boycott of a custom car shop after a truck driver, alleged to be the owner of the business, filmed himself blowing black smoke from his exhaust, known as ‘rolling coal’, at a bike rider.

Kevin Soucie, the owner of Turn 5 Fabrication, posted the video to the local Facebook group ‘McKinney Uncensored’, though it has since been removed or made private.

The footage shows the driver, who filmed the incident on his phone, saying “Oh my God, a cyclist”, before accelerating to pass and covering the rider in thick plumes of black smoke from the truck’s exhaust.

Another #Texas douchebag rolling coal on a cyclist in McKinney 🚘🙈 pic.twitter.com/4gamOcWNz8

The process, which is known as ‘rolling coal’, originated on the truck racing scene in the United States. Some motorists now illegally modify their vehicles to produce the same effect.

Megan Tyler, a cyclist and car enthusiast from the area, posted a screen recording of the video in the North Texas Cycling group. Tyler, who says she recognised Soucie’s voice from the video, called on members of the group to boycott the motorist’s business.

A number of cyclists have since posted reviews of the custom car shop on Google, though some patrons responded by defending Soucie’s alleged actions and ridiculing cyclists.

“Owner posts videos of himself endangering cyclist on the road,” one of the reviews read. “Not someone I’d recommend working with.”

“If the owner acts anything like his business does, I highly do not recommend,” another reviewer noted.

An evasive Soucie initially told local newspaper the Star-Telegram that he was “vaguely familiar” with the video but didn’t “know all the details”. When asked if he was the driver in the video, the business owner refused to comment.

However, Soucie, who posted a photo on Facebook after the incident with the caption ‘I used to want to be a cyclist – but then I remembered I wasn’t gay’, later admitted that he was the driver behind the wheel, writing: “There's one person I'd like to apologise to, and it's the guy who got coal rolled on him.

“It was something stupid. If you are reading this, I would like to apologise to you in person. You're the only person who deserves an apology.”

He subsequently posted a video claiming that the response to the incident, which has included death threats, was an attempt to “cancel me, tarnish the shop and attack me, unprovoked.”

The motorist, who said he was “trying to move this forward in a positive direction”, has offered to build bike racks for the area and to fix broken frames for local cyclists.

In another video, however, Soucie attempted to downplay the incident, claiming that “I, myself, I ride bikes and I’ve dealt with people who have done stuff like this. And you know what? I’ve always just kind of laughed it off.

“It’s not like I hit the guy or swerved toward the guy,” he said. “I got over a lane because he was taking up a lane. That’s what cyclists do. But I understand that what I did was not cool and it was kind of a bad reflection of my company.”

He said that the attempt to boycott his business, and the negative feedback he has since received, is an example of cancel culture, “and that’s really not cool, either.”

Soucie’s actions aren’t the first time ‘rolling coal’ has hit the headlines in Texas. In September 2021, a sixteen-year-old crashed into a group of six cyclists in Waller, 250 miles south of McKinney, after allegedly rolling coal at them in a Ford F-250 pick-up truck.

The teenager was charged in November with six counts of felony aggravated assault with a deadly weapon.