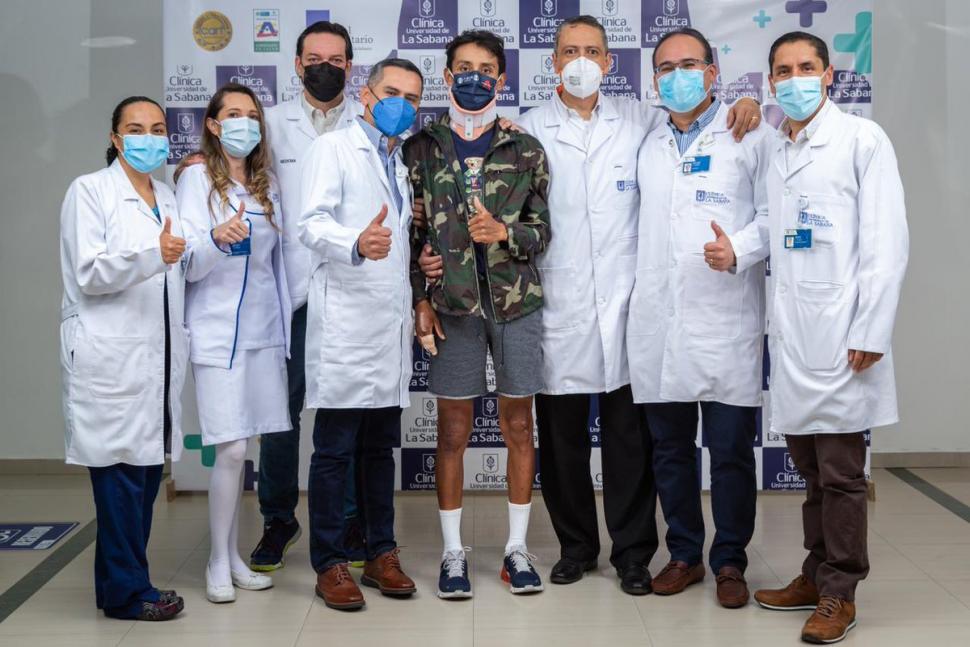 The reigning Giro d’Italia champion Egan Bernal has been discharged from hospital two weeks after he suffered 20 broken bones in a horror crash while training in Colombia. The Ineos Grenadiers rider only recently left intensive care after undergoing multiple surgeries on injuries sustained in a collision with a parked bus on 24 January.

The Clínica Universidad de La Sabana in Bogotá today announced that Bernal has left the hospital to continue his recovery and rehabilitation at home.

“At this time, the patient is in the third phase of the trauma, ready to begin his rehabilitation process. He has no complications and all his injuries are stable and in the process of recovery,” the hospital said.

“Due to the above, we are pleased to report that today the patient has been discharged, to continue his rehabilitation process with our institution on an outpatient basis.

“Today we give more meaning and strength to the words that we carry in our institution as a mission. With pride and hope we begin a new stage together with our athlete.”

> Egan Bernal looking to the future after successful final surgery

Bernal took to Instagram on Thursday to let his followers know that a final operation on the cervical section of his spine was successful.

The 25-year-old also listed his shocking injuries in the post, including almost 20 broken bones (11 ribs, femur, kneecap, multiple vertebrae, metacarpal and a thumb), perforations in both lungs, and a lost tooth, but said he was "grateful to God for putting me through this test."

"I almost died, but you know what?" he wrote. "I am grateful to God for putting me through this test. It is the toughest race, but I have had a group of excellent people around me.

"Yesterday [Wednesday] I had my last major surgery and everything seems to have gone well. So now to recover and make this another... I'M BACK!! And let's rock."

Earlier in the week, Bernal revealed that he had almost died and that there had been a "95 per cent chance of becoming a paraplegic" after the crash.

"Nearly losing my life doing what I love to do most. Today I want to thank God, and all the specialists at Clínica Universidad de La Sabana for doing the impossible, my family, my partner, friends and all of you for your wishes," he wrote on social media.

Bernal was training in his home country with a group of Ineos Grenadiers teammates, including Richard Carapaz, Dani Martinez and new signing Omar Fraile.

Although details about the crash remain limited, it is believed Bernal crashed his Pinarello time trial bike into the back of a parked bus at El Roble toll.

The incident came just days after the group narrowly avoided a head-on crash with a motorist overtaking another road user on a blind bend.

Last week it was confirmed that Ineos teammate Brandon Rivera was being treated at the same hospital as Bernal, following another training camp crash.

Rivera suffered multiple fractures, the most serious to his elbow, which was also dislocated.