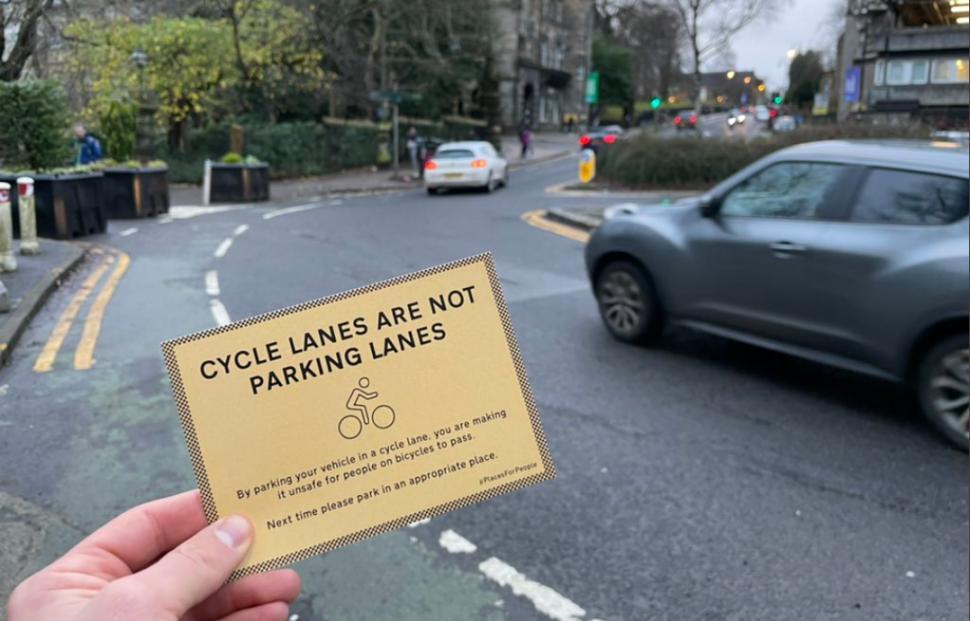 Cycle lanes are not parking lanes (picture via Thomas Cornwallis)

Brighton & Hove ​ City Council is using CCTV cameras to catch and fine drivers who illegally park in cycle lanes – a hazard that forces cyclists riding along them to move out into the main carriageway.

Under legislation introduced in June 2020, councils can use CCTV evidence enabling them to issue penalty charge notices (PCNs) by post.

The Argus reports that up until 17 December, 29 motorists had received fines since the cameras were installed last October in four cycle lanes in the city.

A fifth location, on London Road, was added on 1 January, and cameras on a sixth, on a separate section of Preston Road, will come into operation from 1 February.

The newspaper says that a Freedom of Information Request showed that as of 17 December, 14 motorists had paid PCNs of £35 each, with 13 fines yet to be paid and two being appealed.

At the time, the city council said: “It is important that the city’s cycle lanes are free for people cycling to use, but sometimes cyclists can find them obstructed by people who have parked inconsiderately.

“People who park in The Lanes are given a short grace period to allow for pick-ups and drop-offs only.”

While it is against the law to park in a cycle lane, enforcement using CCTV can only be done where the location is also subject to restrictions such as a single or double yellow lines, or where kerb markings indicate that loading is not allowed.

A spokesman for Brighton & Hove City Council spokesman commented: “We want to keep Brighton and Hove moving. It’s important that the city’s cycle lanes are free for people cycling to use. But sometimes they can be obstructed by people parking inconsiderately.

“New legislation came into force in June 2020 which meant we can now use cameras as evidence to issue Penalty Charge Notices (PCNs) to people who park in cycle lanes where there are currently restrictions on parking or loading.

“People who park in the lanes are given a short grace period to allow for pick-ups and drop offs only.

“Any surplus generated by parking fees and charges must be spent on provision of public transport services or to road, air quality or environmental improvements

“We use our surplus to provide concessionary bus passes for older and disabled people, subsidising bus routes, road safety and transport improvement projects,” he added.

Councils and road safety partnerships are often accused of using fines imposed on motorists for parking illegally or ignoring speed limits as a ‘cash cow’ to extract money from drivers, although as the council’s response highlights, the money goes towards improvements that benefit all.

Moreover, as is regularly pointed out on social media to those lamenting fines for illegal parking or speeding, there are simple ways to avoid them – namely, only park where it is permitted, and keep within the relevant speed limit.

In December 2020, Thomas Cornwallis, convener of the Strathclyde cycling campaign group GoBike left homemade ‘parking tickets’ (pictured above) on cars illegally parked in a cycle lane outside a school in the Hillhead district of Glasgow – and for his efforts was told to “f*ck off” by an angry motorist he had ‘ticketed’.

1
Grant Shapps: Cyclists should have number plates, be insured and subject to speed limits
2
Confusion as Grant Shapps now says he is "not attracted to bureaucracy" of number plates for cyclists
3
"Grant Shapps should be congratulated": Frothing talk shows and Mr Loophole discuss number plates for cyclists
4
Is a 13-speed Campagnolo road groupset on the way?
5
Cycle route in Swansea or Alpe d'Huez? Hairpin-packed active travel path opens
6
“Think!” – Ineos Grenadiers rider Laurens De Plus sends safety message to drivers after he is knocked off bike
7
Cyclist sustains serious injuries after council fails to remove fallen tree from bike path
8
Roy Keane says cycling is his only way of keeping fit – but he’s “not exactly Sean Kelly”