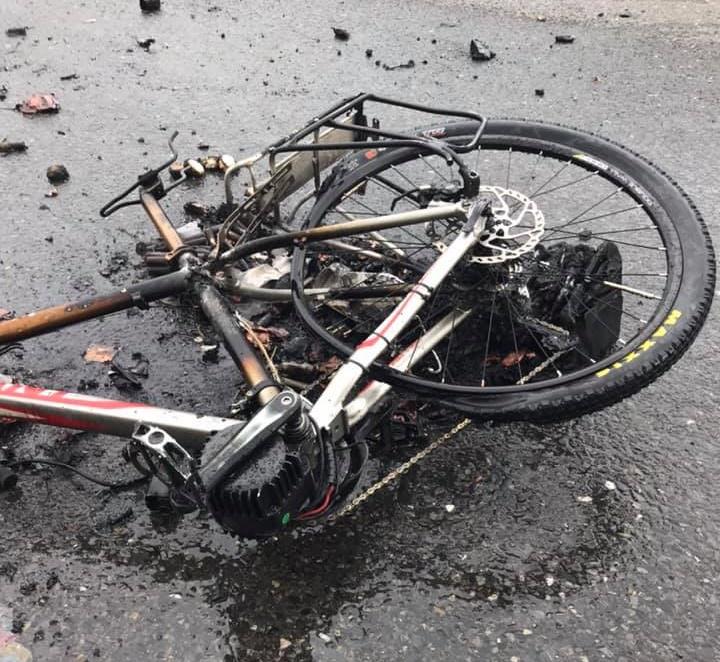 Chichester Fire Brigade were yesterday called out to extinguish an e-bike fire. The bike in question looks to have been a DIY affair where a motor and battery had been fitted to a conventional bike.

“Please keep such items well maintained and serviced only by qualified mechanics. Whilst unlikely, if you ever encounter this, stay back so not at risk from hazardous projectile ‘missiles’ and call us!”

Commenting beneath, a witness said she had stopped in the car with the hazard lights on to keep people away.

“Myself and my mum were trying to divert traffic coming into the road but unfortunately a lot of people just ignored us – then realised we weren’t talking rubbish,” she said. “It’s a shame there wasn’t another police car at the entrance of that road to stop the traffic as I really thought there was going to be a car accident with people’s driving.”

She added that despite the unfortunate circumstances, her son was “made up” at seeing fire fighters turn up to attend to a “real” fire.

E-bike fires are rare, but we have reported on them in the past.

In June 2017, a cyclist in south-west London had a lucky escape when the battery powering a motor he’d had fixed to his mountain bike exploded and burst into flames.

Dave from our sister site, ebiketips, said: “There are a lot of aftermarket e-bike kits readily available in the UK, some of which are legal for use on UK roads and some which are not: if it's over 250W, has a throttle instead of being pedal-assist, or doesn't have a speed sensor to cut the motor above 25km/h, it's not legal.

“Obviously when you're buying direct and cheap you're putting yourself at the mercy of a manufacturer's quality control, and it's often difficult to know what the build quality of a system is even after it arrives.

“Lithium-Ion e-bike batteries are generally made up of an array of smaller cells, usually 18650 cells of which you need around 40 for a standard e-bike battery.

“They're well-known for being flammable if they short-circuit or if there's a weak point in the system where heat can build up, and it's not only budget manufacturers that have issues: look at Samsung's problems with the Galaxy Note [in 2016].

“But the lower the price, the more you can expect corners to have been cut. Our advice would be to choose carefully, and not just to go for the cheapest system you can find.