“Without Brian Robinson, there’s no Bradley Wiggins or Mark Cavendish”: Hundreds pay their respects at funeral of pioneering British cyclist

The past, present, and future of cycling in Britain came together yesterday to pay their respects to the rider who almost single-handedly paved the way for over 60 years of British success on European roads, Brian Robinson.

Mirfield-born Robinson, the first British cyclist to finish the Tour de France in 1955, was laid to rest yesterday in Huddersfield. The trailblazing Yorkshireman, who made further history by winning two stages of the Tour in 1958 and 1959, passed away on 25 October at the age of 91. As the funeral procession made its way to Huddersfield Crematorium, over 100 local cyclists formed a guard of honour, raising their bikes as the hearse passed.

Barry Hoban, one of Robinson’s earliest heirs who went on to win eight Tour stages himself in the 1960s and 1970s, described his fellow Yorkshireman as a “pioneer”.

“Brian was my very first childhood hero,” Hoban told ITV at the funeral. “I was a young bike rider and Brian was making headway on the continent.”

Cycling commentator and author Ned Boulting, who described the funeral as “a farewell befitting a great man”, also emphasised the enormous impact Robinson’s unprecedented success had on the generations of British talent who followed in his wheel tracks across the English Channel.

“When Brian was doing it, it was unheard of, the Brits had no place at the table until Brian came along,” Boulting said.

“And I think people are now understanding that without Brian Robinson, arguably there’s no Tom Simpson, there’s no Chris Boardman, eventually there’s no Bradley Wiggins and no Mark Cavendish. His contribution is that significant.”

A hugely popular and influential figure, Robinson was part of the first British team to take on the Tour de France in 1955. While the Tour was regarded as a step into the unknown for Robinson and his teammates, the Yorkshireman had already achieved some notable results on the continent earlier that year while racing for Hercules (the de-facto British team for that summer’s Tour, raced by national squads), including fourth at the Flèche Wallonne classic and eighth overall at Paris-Nice.

Nevertheless, as the rest of the Hercules-branded Great Britain national team succumbed to the intense demands of cycling’s biggest race, Robinson finished an impressive 29th overall and, along with lanterne rouge Tony Hoar, became the first Brit to complete the ‘Big Loop’.

Not that Robinson realised the scale of his achievement at the time. Speaking to author William Fotheringham for his book on British cycling, Roule Britannia, he said: “I knew Charly Holland had started the Tour, I knew no one had finished before us, but when you’re young and keen you just put your head down and go and don’t read the history books.”

Today we join the cycling community in sending our heartfelt condolences to the family of Brian Robinson – the first British rider to complete and win a stage at @LeTour, and member of the British Cycling Hall of Fame. pic.twitter.com/oimk7DzQff

In any case, the Yorkshireman continued to etch his name into those very volumes, becoming the first Briton to win a Tour stage in 1958, before repeating the feat the following year with a memorable solo victory in the Jura mountains, beating the rest of the field into Chalon by over twenty minutes – to this day one of the race’s largest winning margins.

Notably, Robinson also became the first man from the UK to secure a professional contract at a leading European squad, Saint-Raphaël. In his seven years as a full-time pro, he put together a formidable palmares, the crowning glory of which is perhaps his stage win and overall triumph at the Critérium du Dauphiné Libéré in 1961.

A gifted climber and stage racer, he also finished eighth on GC at the 1956 Vuelta a España and 14th at that year’s Tour, before securing a podium spot at Milan-San Remo in 1957.

His successes and pioneering status near the top of the sport on the continent in the late 1950s helped pave the way for the next generation of British talent, led by his first protégé and future world champion Tom Simpson, with whom Robinson shared a team (Rapha) and a flat in 1960 and 1961.

“He was a good friend and adviser to me,” Simpson wrote in his 1966 autobiography Cycling is My Life, “For what he lacked in the legs he made up for in the head!”

After his retirement from racing at the age of 31, Robinson continued to play a key role in helping young British cyclists succeed in Europe as President of the Dave Rayner Fund, while he was also a patron of StreetBikes, a Yorkshire-based charity which provides all-inclusive cycling sessions for people of all abilities. 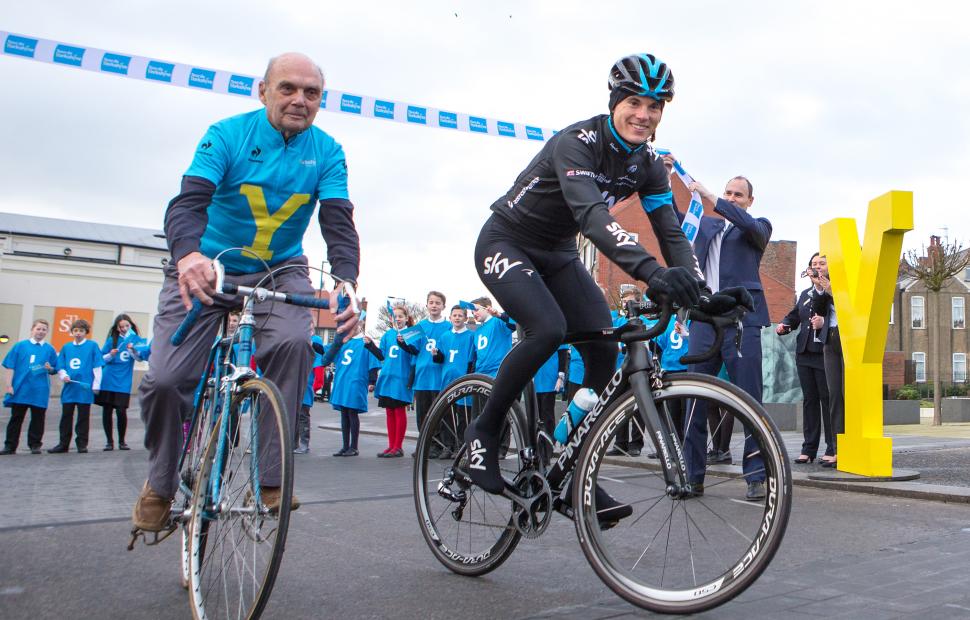 Alongside Ben Swift at the 2015 Tour de Yorkshire (Alex Whitehead/SWpix.com)

He was an instrumental figure in Yorkshire’s successful bid to host the opening stages of the Tour de France in 2014, the same year a beer was launched in his honour (bearing a polka-dot design in a nod to his success in the mountains during his career), and later served as an ambassador for the Tour de Yorkshire stage race.

Robinson continued to ride his bike well into his 80s, and despite being struck by a motorist while riding near his home in 2014, puncturing a lung and suffering a fractured collarbone and ribs, still managed to clock up 80 miles a week.

As well as his ground-breaking achievements on the bike, Robinson will be remembered for his role in nurturing the sport in Britain, and for kicking open the door for generations of British pros to race – and succeed – in the mythical world of European cycling.

“He was a humble guy who didn’t really realise what he’s done throughout his career, and what he’s done for British cycling,” former Team Sky rider and British road race champion Russ Downing, who raced alongside Robinson’s grandson Jake Womersley at the 2018 Tour de Yorkshire, said at yesterday’s funeral.

“The word gets thrown around quite a bit – legend – but Brian definitely was one of those.”