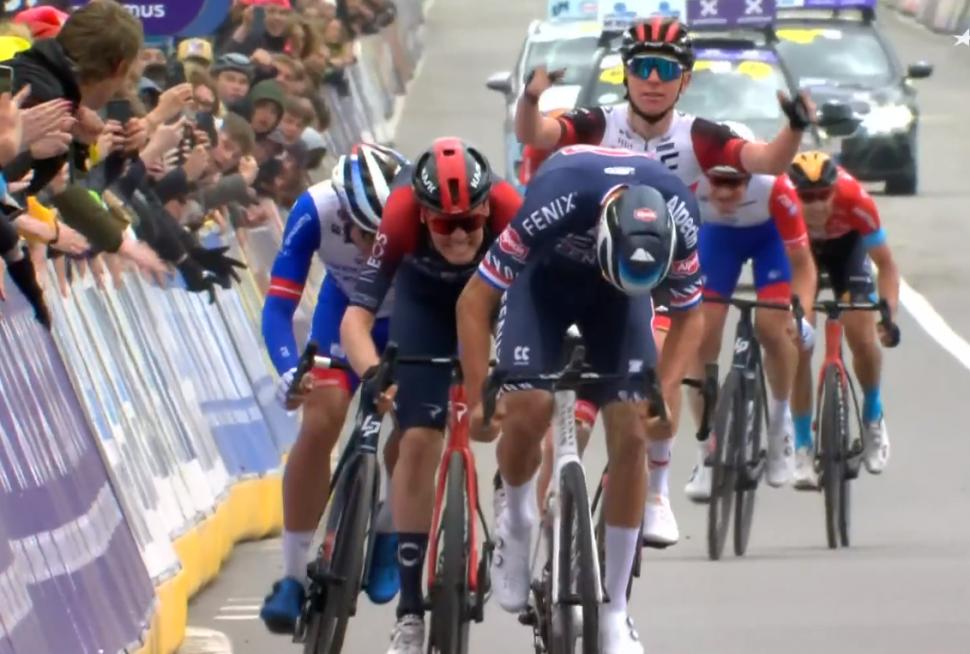 The Dutchman makes amends for last year’s defeat, as Tadej Pogačar is outfoxed in dramatic final kilometre
by Ryan Mallon

Mathieu van der Poel made up for last year’s defeat to Kasper Asgreen, out-thinking and then outsprinting Tadej Pogačar in a thrilling, dramatic finale to take his second Tour of Flanders in three years. Despite blowing the race apart with a series of attacks, Pogačar had to settle for fourth after Dylan van Baarle and Valentin Madouas caught the leading duo in a tense, unpredictable last kilometre.

After forging clear of the leading group of five, which included Madouas, Van Baarle and the very impressive Fred Wright, on the final ascent of the Oude Kwaremont, Van der Poel and Pogačar almost ground to a halt in a nail-biting, track sprint-esque final kilometre.

This cat-and-mouse tactical battle allowed the resilient Madouas and Van Baarle, who crossed the Paterberg only half a minute behind Pogačar and Van der Poel, to bridge across with less than 500 metres to go.

While Pogačar was determined to make sure that his Dutch rival led out the sprint, Van der Poel – a Ronde win to the good already in his career – was confident enough to rely on his finishing ability even as the chasing two latched on, and refused to call the Slovenian’s bluff. The 23-year-old UAE Team Emirates rider, on the other hand, cut a frustrated figure in the closing metres, unable to sprint his way out of the white and dark blue box he had naively allowed to ensnare him.

Despite the added complications, Van der Poel was strong enough to definitely banish memories of 2021, easily taking the second Ronde win of his career ahead of Van Baarle (who was on the receiving end of a slight shove by Pogačar during the sprint) and Madouas.

In what will surely be remembered as one of the great editions of the Tour of Flanders, Pogačar set about proving to the cycling world that he can do almost anything on a bike, effortlessly bending the race to his will on his debut, even after suffering a crash in the opening kilometres.

After a relatively benign opening four hours – despite the morning break only being granted around four minutes – the race for the win started in earnest with around 90km to go when Movistar’s Ivan Garcia Cortina dragged a dangerous group clear, including 2019 Ronde winner Alberto Bettiol, former world champion Mads Pedersen, and in-form British rider Ben Turner.

While that strong-looking group, which swelled when Connor Swift, Kevin Geniets and Tim Wellens jumped across, gained almost a minute at one point, it all came to naught on the Oude Kwaremont the second time up with 54km to go, when Pogačar laid down his first ominous marker. The Slovenian scythed through the groups ahead of him, effectively neutralising the race in one frighteningly strong move.

Ineos Grenadiers’ Dylan van Baarle and Bahrain-Victorious’ Brit Fred Wright took advantage of a brief lull after the first ascent of the Paterberg to slip clear and gain a gap.

That attack would prove remarkably prescient – behind the two leaders Pogačar again tore the races to pieces on the fearsomely steep Koppenberg, with only Van der Poel and Madouas, a revelation of the spring, able to respond. Reigning champion Kasper Asgreen, matches burned from trying to follow the Slovenian on the Kwaremont, saw the race slip away as he shipped a chain at the top of the climb.

Pogačar, Van der Poel and Madouas bridged across to Van Baarle and Wright on the Taaienberg, before the two favourites definitively broke away last time up the Kwaremont. And – despite a brief scare for the Alpecin-Fenix rider in the gutter on the Paterbeg – that appeared to be that. Until the dramatic closing metres that is, when Van der Poel once again showed his undoubted class after an injury-hit start to the season.

"I worked so hard for this one," Van der Poel said after claiming his second monument. "At first it wasn't even sure if I would get to the Classics and to win is incredible."