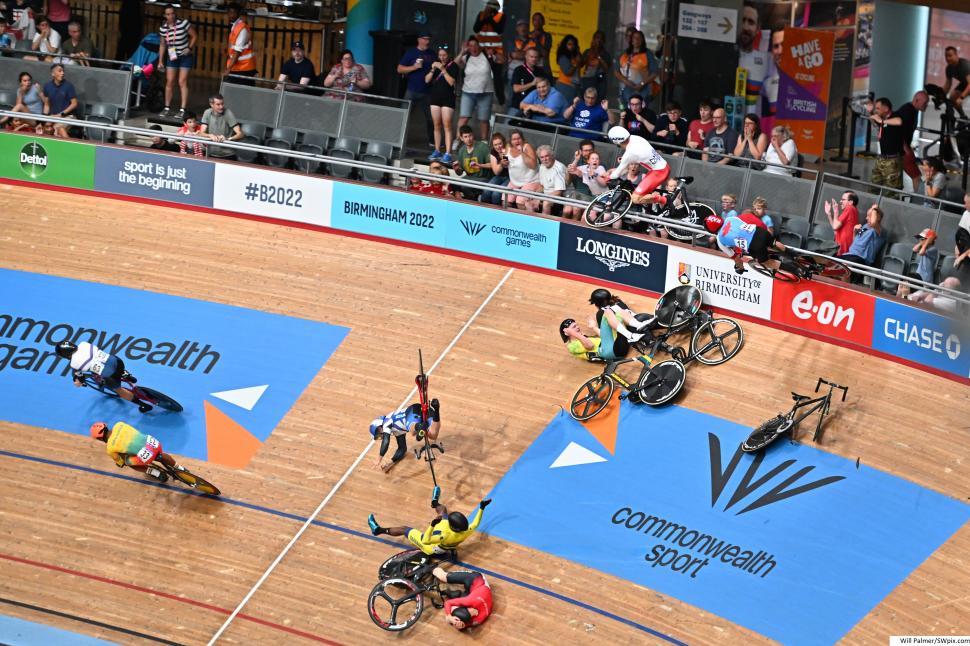 The Team England rider and his bike landed in the crowd following the high-speed crash, injuring a number of spectators and causing the rest of the morning session to be cancelled
by Ryan Mallon

Update: Team England’s Matt Walls has been discharged from hospital after a horrifying crash during qualifying for the Commonwealth Games scratch race, which saw him catapult over the barriers and into the crowd.

Walls was treated for forty minutes inside the Lee Valley VeloPark before being transferred to hospital, but according to his team suffered no serious injuries in the dramatic fall.

The Isle of Man’s Matt Bostock and Canada’s Derek Gee were also treated in hospital but have no significant injuries. Two spectators were treated for minor injuries by medics at the velodrome.

“Following medical treatment in hospital, Matt Walls has been discharged with stitches in his forehead, scrapes and bruises but thankfully no major injuries,” a Team England spokesperson said.

“We send our best wishes to all other riders and spectators involved in the crash and thank the medical teams for their expert care.”

Olympic omnium champion Matt Walls has been taken to hospital after a horrific crash during qualifying for the Commonwealth Games scratch race, in which the Team England rider was catapulted over the barriers and into the crowd.

The crash took place during the final lap of the scratch race qualifier, following a touch of wheels near the front which brought eight riders down.

Walls, who rides for WorldTour team Bora-Hansgrohe on the road, attempted to avoid the crash by riding up the banking, as Australia’s Josh Duffy and New Zealand’s George Jackson fell in front, but in doing ended up flying over the barriers.

Coaches and medics rushed immediately to their riders following the devastating crash, while one Team England coach climbed up the bank of the track to reach Walls.

The 24-year-old was treated for over 40 minutes before being taken away in an ambulance.

The Isle of Man’s Matthew Bostock was also carried away on a stretcher and taken to hospital. Canadian rider Derek Gee, who like Walls was forced to surf the barriers, was the third rider to require hospital treatment.

Two spectators, a young girl and a man, received medical attention, with the latter requiring treatment for cuts to his arm. A spokesperson for the Games confirmed that neither spectator was taken to hospital.

The remainder of the morning session at the Lee Valley VeloPark was abandoned following the crash, with spectators asked to leave the venue while Walls received treatment in the stands.

A Team England spokesperson has since confirmed that Walls is “alert and talking”.

The afternoon session at the velodrome, which was due to start at 3pm, has taken place as scheduled.

"We would like to send our best wishes to the cyclists and spectators involved in this incident and to thank the medical team for their swift action," a Birmingham 2022 spokesperson said.