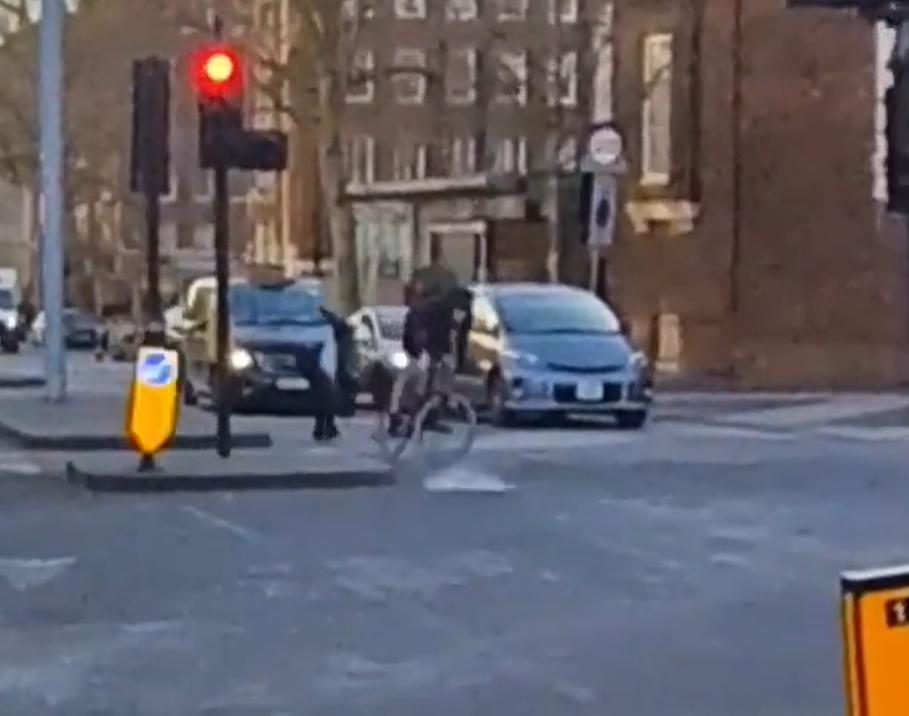 Jeremy Vine has been accused of ‘bias’ after the Radio 2 presenter posted a video on his Twitter account which showed a private hire taxi driver throwing a glass bottle at a cyclist following an altercation.

In the video, which was shot yesterday, a cyclist can be seen arguing with a driver while the pair are stopped at traffic lights. Though the initial cause of the confrontation is unclear, the motorist appears to have opened his car door to speak to the bike rider.

The cyclist then hits the car’s side window, shutting the door in the process. He smacks the window a second time before remounting his bike, at which point the motorist emerges from his car and immediately hurls a glass bottle, which smashes underneath the cyclist’s wheels as he rides away.

Following the incident, Vine rides across to tell the driver he “can’t do that”. When questioned by the presenter about what happened, the motorist is heard to reply: “he pushed my car”. Vine replied that “you can’t throw glass at someone”, before riding off.

Today's madness — right in front of me, a cyclist smacks a car window and then the driver gets out and throws a glass bottle at him. pic.twitter.com/n1z2W1TRHF

The broadcaster, who regularly posts videos of his London commute on Twitter, has been heavily criticised for sharing the footage, which one account claimed presented “a biased view without full facts”.

Bizarrely many of the replies under Vine’s tweet actually defended the driver’s reaction, and accused the presenter of ignoring any potential wrongdoing by the cyclist.

One account, connected to a courier firm, replied: “You only react when the driver does something, which pretty much says you’re ok with a cyclist banging a car window?”

“Don't have much sympathy for the cyclist,” another user said. “Aggressively banging on windows isn't great and will just aggravate any situation, as will running a red light. Driver wrong to throw bottle but (mainly middle class) cyclists need to remember that the roads aren't nice places to be.”

Elinor also said: “It's not clear what preceded this, but the cyclist isn't completely without fault here: that was a rather aggressive window bang. It didn't deserve a bottle thrown in retaliation, but it was always going to illicit some kind of reaction.”

One user was even blunter, responding: “What’s he expect? Driver to just ignore him smashing his car? Cyclist is the one that’s mad.”

Staggeringly, another account even appeared to doubt the veracity of Vine’s regular videos, replying: “You seem to film something against cyclists every day, are you sure you’re not just staging these incidents?”

Others, of course, were quick to jump to Vine’s and the cyclist’s defence. Lindsey wrote: “The replies to this are astounding. Does anyone REALLY believe someone would slap a car window for no good reason? The driver bias is ridiculous,” while another user said that there was a “surprising number of people who consider that there are many scenarios where aggressively throwing bottles at people is perfectly acceptable behaviour!”

Some also linked yesterday’s incident to the mainstream media’s controversial coverage of the Highway Code updates, which came into place over the weekend.

Welcome to the hostile environment created by the media over the last week.

I just literally cycled there where Jeremy films it this morning... That's what feeding motorists with hatred against cyclists ends up with. https://t.co/z3u8sZqQih