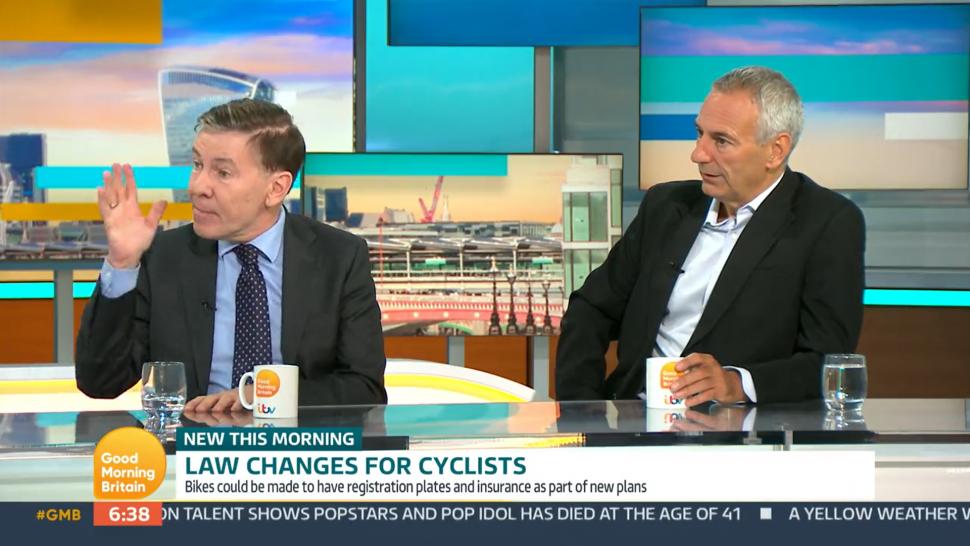 How Grant Shapps' pledge to enforce tougher rules on bike riders was reported in print and broadcast media...
by Dan Alexander

It has been a whirlwind morning of newspaper front pages, talk show rants and social media doomscrolling since Grant Shapps' pledge to introduce tougher rules on bike riders (and subsequent comments from the Department for Transport that a softer approach published in a second interview is a "more accurate reflection of the Transport Secretary's view")...

So, how was the news reported in the written press and broadcast media? Let's start with the newspapers, which went to print late last night, headed by the Daily Mail front page interview with Shapps, headlined: 'Cyclists may need number plates'.

Simultaneously, across London, The Times also went front page with their own Shapps interview, including the ever so contrasting comment: "I'm not attracted to the bureaucracy of registration plates. That would go too far."

By the morning, the talk show ranters had fired themselves up for the usual 'debate' and 'discussion', Talk TV's Mike Graham dropping an all-time anti-cycling bingo monologue, letting us know exactly how he feels...

"Putting themselves at risk, putting other people at risk. There are loads of cyclists who enjoy riding on the pavement, loads of cyclists who enjoy going down one-way streets the wrong way. Cycle lanes have destroyed most of the infrastructure of many cities in this country and it's getting worse. So why not make it possible for an even playing field for everyone who uses the road?"

If you needed any more?

Graham's guest, Nick 'Mr Loophole' Freeman the lawyer whose 2021 petition, to have cyclists be required to wear hi-vis tabards with identification numbers, scraped across the 10,000-signature mark for a government response before being rejected.

Freeman told the show: "There are an awful lot of cyclists who actually do want this. It's the minority who are particularly vociferous. I have had signatures from other cyclists saying what's being suggested is going to increase safety of those on our roads, and who can ever criticise that?

"I, of course, accept motoring doesn't have the same benefits that the green agenda has, but at the same time it [cycling] is dangerous and why would anyone say 'I should be exempt from legislation?'

"Just imagine taking number plates off cars. It would be mayhem [...] because we're suddenly saying 'we can't trace you' so we are relying on your integrity. That is the situation with cycles, so a registration tabard or a visible sign that can be easily read by members of the public. So if you are a motorist with a dash cam and you see a cyclist cycling dangerously, you can record it.

"If they do not respond to it they are going to get six points on their driving or cycle licence and face a heavy fine, and of course need insurance. What we're saying is all of us who use the roads are going to be accountable. Nobody can seriously argue against it."

The Talk TV comments added to his quotes in the Daily Mail's story, where Freeman suggested "Grant Shapps should be congratulated".

Bikes could be made to have registration plates and insurance as part of new plans.@RobbieRinder, @CharlotteHawkns, @toryboypierce and @Kevin_Maguire debate whether or not it's a good idea.

Watch GMB on ITV and on ITV Hub 👉 https://t.co/6iQ6ebeOEQ pic.twitter.com/mpRPcaz85x