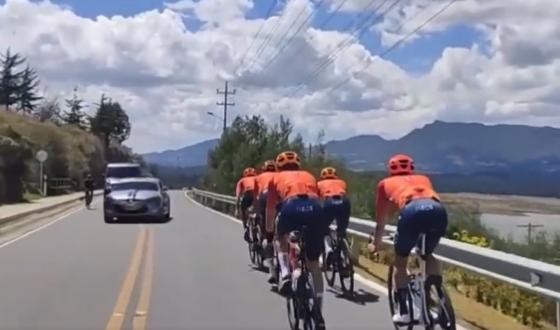 Our regular series featuring close passes from around the country and beyond - today it's Colombia.....
by Ryan Mallon

It’s often said that cycling is the most egalitarian sport in the world. As the old cliché goes, you can’t just lace up your boots and have a kickabout on the pitch at Wembley, but you can (in theory anyway) ride on the exact same roads as Tour de France winners. But here’s the rub – that also means professionals are subjected to the same dangers while out training as us regular punters.

Yesterday that danger was strikingly apparent for a small group of Ineos Grenadiers riders training in the Cundinamarca region of Colombia.

The group, led by 2019 Tour de France winner Egan Bernal and 2019 Giro d’Italia winner Richard Carapaz, experienced a frightening near miss on a shallow descent when a driver decided to overtake a van and a cyclist at the same time on a blind bend as the riders approached.

Fortunately, the motorist was just able to swerve back in without hitting either the pros or the amateur cyclist heading in the opposite direction.

The Ineos riders also had to have their wits about them earlier in the day, when a dog threatened to run into their path on a similar descent. Both near misses were captured by Karol David Torres, a former racer who provides technical support for pros on training camps in Colombia.

It’s not the first time that Bernal has had a close call on home roads this winter: in November he narrowly avoided being struck by a driver who tried to squeeze through an almost impossible gap between an oncoming lorry and the Colombian national hero.

Following Giant-Alpecin’s horrific mass crash in 2016, reports of training camp run-ins with motorists are becoming increasingly common. Wilco Kelderman suffered a broken vertebra after a driver crashed into his Bora-Hansgrohe team when out training near Lake Garda last January, while three Drone Hopper-Androni riders were injured in December after a motorist pulled out in front of them in Spain.