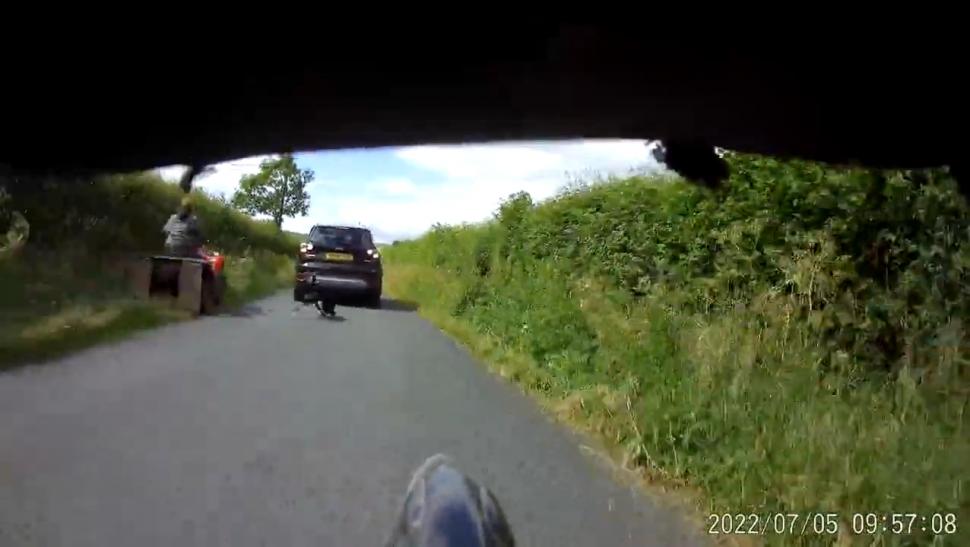 Near Miss of the Day 806_ Driver reverses at cyclist, runs over dog (rear view) 1-18 screenshot

Near Miss of the Day 806: Shocking footage shows driver reversing at cyclist and running over dog

Update: North Yorkshire Police says original decision not to act on footage “was wrong” and that an investigation is “required”
by Simon_MacMichael

Update, 13/08/22: North Yorkshire Police have said that their initial decision not to act on footage which showed the driver of a 4x4 close pass a cyclist on a country lane before reversing back down the road towards him, hitting a dog in the process, was “wrong” and that an investigation into the incident is required.

Following the shocking incident (which can be viewed in our original Near Miss of the Day feature below) the police told road.cc reader Peter that “no traffic offences were committed” and that the cyclist had contributed to the driver’s decision to reverse by shouting “watch out!” following the close pass, an act the officer said constituted ‘road rage’.

After that rather unsatisfactory verdict, Peter lodged a complaint with the North Yorkshire Police and Crime Commissioner. This morning he told road.cc that he has received a response from a chief inspector who conducted a review into the incident.

According to the chief inspector, the review concluded that “the initial decision was wrong and that an investigation is in fact required.”

Peter told road.cc: “The constable who has been tasked with the investigation has already contacted me. So far, so good.”

You can read the original Near Miss of the Day article below:

This is one of the most shocking submissions we have had to our Near Miss of the Day series, with the driver of a 4x4 making a close pass at a cyclist on a country lane and, when the rider remonstrated, reversing back down the road towards him, forcing a quadbike rider to swerve and running over a dog that had been travelling on it.

The incident happened on the morning of Tuesday 5 July 2022 on Orcaber Lane near Austwick, in the south west corner of the Yorkshire Dales National Park. The incident starts at 1 minute 7 seconds into this video, shot from a rear-facing camera.

“I reported this incident to North Yorkshire Police,” Peter told us. “Their response, in a telephone call, was ‘no traffic offences were committed’ and that they would take no action.

“Briefly, they described my shouting ‘watch out’ as an oncoming wide SUV passed me at a speed I felt was too fast for a single-track country lane as ‘road rage’ and a contributory factor in the driver then reversing at speed towards me.

“I was saved from the encounter I feared by his running over a dog that fell from a quad bike that he forced off the road.”

Reversing a vehicle is covered by Rules 200-203 of the Highway Code.

Rule 202 says, among other things, that drivers should

Look carefully before you start reversing. You should … check there are no pedestrians (particularly children), cyclists, other road users or obstructions in the road behind you … reverse slowly …

You MUST NOT reverse your vehicle further than necessary.

“Given the police response, I am contacting the Police and Crime Commissioner with my concerns that the response indicates a worrying lack of concern with improving safety for vulnerable road users,” Peter continued.

“I think that my intuition that this driver was dangerous when he passed me was vindicated by his subsequent dangerous behaviour. I had expected that he would at least receive a warning from the police that this kind of behaviour is not acceptable.”

He added: “I pointed out to the PCC that the York and North Yorkshire Road Safety Partnership Safer Roads Strategy 2021-26 states that ‘Pedal cyclists account for a high and increasing proportion of all KSIs over the last five years’.”

As for the dog – which we suspect from the footage may be a working border collie given the prevalence of sheep farming in the area – Peter told us: “It seemed immobile but the two drivers didn’t seem to want to speak with me so I left without knowing whether it was dead or alive.”

Here’s the footage from his front-facing camera.

Subscribe
Near Miss of the Day
NMotD North Yorkshire