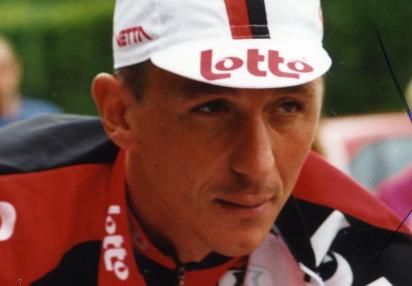 Andrei Tchmil, who in 2000 became the oldest ever winner of the Tour of Flanders at the age of 37, has revealed that he has undergone surgery for cancer.

Now aged 57, Tchmil revealed on Facebook that he had undergone surgery in the northern Italian city of Brescia.

He wrote: “Dear friends, 20 years ago I won the race of my dreams.

“20 years later I had to fight another competitor, which seemed unbeatable, which silently eats away at you inside – cancer.

“Many thanks to Professor Gianluca Baiocchi and his team of doctors in Brescia for the liberating operation and for the help and support I had.

“Life is a continual race,” he added.

Born in 1963, Tchmil competed under the flag of the Soviet Union until 1991 when it was broken up, then Moldova from 1992 to 1995 when he switched to Ukraine, and finally Belgium until his retirement in 2002 after a crash at the Three Days of De Panne.

A cobbled Classics specialist, he is one of a select group of riders to have won three or more of cycling’s Monuments, triumphing at Milan-San Remo in 1994 and Milan-San Remo in 1999, a year in which he also won the now defunct season-long competition, the UCI Road World Cup.

From 1994 to 2002, he rode for the Lotto team, and his Tour of Flanders win in 2000 came after he attacked coming off the climb of the Bosberg with 11 kilometres remaining to hold on and cross the line first by 4 seconds.

In retirement, Tchmil had a spell as minister for sport in Moldova and also acted as a consultant to the UCI in setting up cycling centres in eastern Europe.

He was also the first manager of the Katusha team, a position he held for two years from 2009-11.