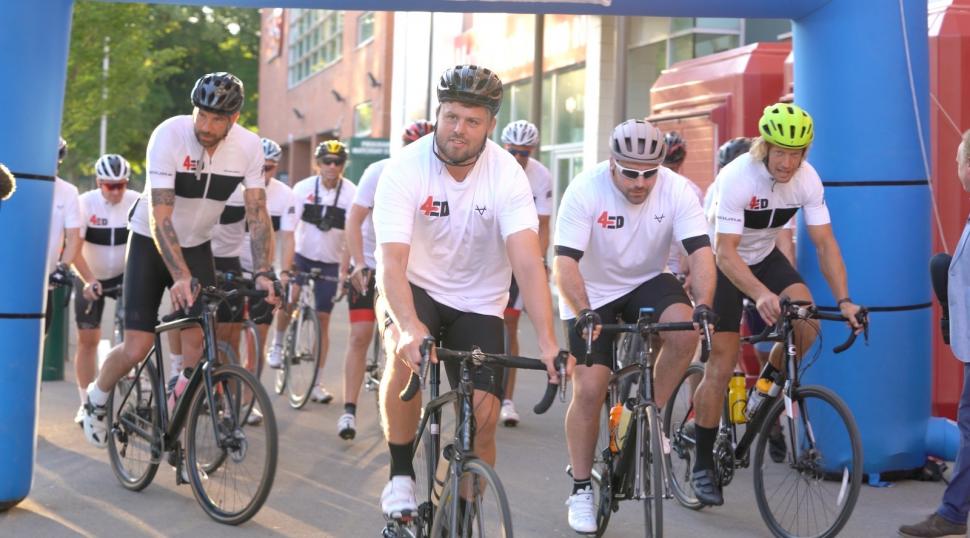 Gloucester player Ed Slater retired from the sport last month at the age of 33, after announcing that he was diagnosed with motor neurone disease
by Ryan Mallon

Former Gloucester and Leicester Tigers rugby union player Ed Slater, who retired from the sport with immediate effect in July after announcing that he has been diagnosed with motor neurone disease (MND), completed a 350-mile charity cycle ride with some of his old team-mates last week.

The ride was undertaken as part of the ‘4Ed Campaign’, which was launched by Gloucester Rugby following the lock’s announcement of his diagnosis last month, reports Gloucestershire Live. Funds raised through the campaign will be used to support Slater and his family, as well as being directed to a selected MND charity.

Slater, who played over 200 times in the Premiership for Gloucester and Leicester Tigers as well as captaining the England senior team in an uncapped tour match in New Zealand in 2014, was joined by former team-mates Fraser Balmain, Billy Twelvetrees, Jim Hamilton, Alex Brown, Charlie Sharples and Lewis Ludlow for the 350-mile ride.

Starting in Gloucester, the group cycled to Leicester before making their way to Slater’s hometown of Milton Keynes, and then Twickenham Stadium. They eventually finished back in Gloucester on Wednesday evening at his former side’s Kingsholm Stadium in front of an emotional crowd.

What an unbelievable welcome for @edslater and the team after 350 miles over three days.#4Ed

“I don't know where to start,” Slater told Gloucester Rugby player Mark Atkinson at the finish line. “I had a little cry coming down Birdlip Hill I’ll be honest.

“It’s been quite emotional and a tough three days, but these guys dragged me through three tough days – today was a really, really tough day.

“[It's] really emotional to feel all your support,” the 34-year-old told the crowd. “I’m just a normal bloke from Milton Keynes who’s ‘okay’ at rugby, and the way you’ve supported me after this diagnosis has been huge.

“I never would've expected it, so I have to thank you from me and my family – I can’t thank you enough. It’s been mind-blowing.”

While Slater and his old team-mates were riding between some of English rugby’s most recognisable places, this week another cyclist and MND campaigner took on a gruelling 265-mile route in the Cairngorms to raise money for a foundation set up by a Scottish rugby hero, Doddie Weir.

34-year-old author Davy Zyw, who was diagnosed with MND four years ago, this week completed the non-stop 20-hour ride through Scotland’s highest roads alongside his twin brother Tommy and a group of friends.

Zyw, who has raised over £150,000 for Weir’s My Name’5 Doddie Foundation during the last four years, has pledged another £50,000 to the organisation following his inspirational ride.

Former Scotland and British & Irish Lions lock Weir revealed in 2017 that he has motor neurone disease, and later that year established the My Name’5 Doddie Foundation, which aims to “help fellow sufferers and seek ways to further research into this, as yet, incurable disease”.

In February this year, the ball used in the Wales versus Scotland Six Nations game was taken by bike from Edinburgh to Cardiff to help raise funds for the charity.

Zyw said the ‘High Five’ challenge over the Cairngorms “pushed us to the edge of our capabilities”.

Massive #high5 to our team captain @DavyZyw
and the #RideforMND team 🖐

£53,065 and still counting. Still time to donate if you can.https://t.co/VZQMNt0E9S pic.twitter.com/kggFkahSGy

“We are battered but not broken, after close to 20 hours in the saddle cycling 265 miles across the toughest terrain Scotland had to offer,” he said after completing the mammoth ride.

“The High Five takes in the highest road climbs – over 19,000 feet… The road was long, and many of the hours were dark, but it was the climbing which stretched us. The Lecht in 31C was particularly taxing.

“But wow, we were sustained and fuelled by our dedication to this cause and the incredible support we have received.

“The High Five is complete but my battle against MND continues, fortified by the steadfast support of so many who believe, like me, that this disease isn’t incurable, but underfunded.”