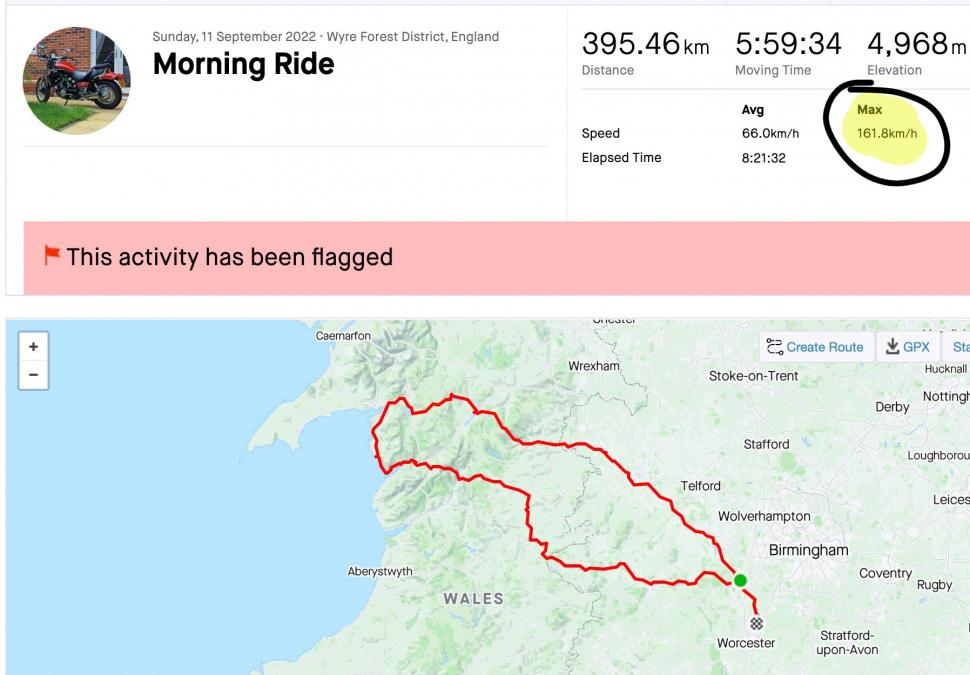 Updated with a statement from Strava.

It's an email sure to ruin your day: Uh oh! So-and-so just stole your Strava KOM! Cue frantic analysis of their ride, segment effort and previous achievements to double (and triple) check if you've got grounds for a flag... or, more often than not, to find out that you just need to be a bit fitter and faster...

There is a serious point in this, however, as road.cc contributor Matt Page has spotted a trend of losing his KOMs to 'riders' hitting law-breaking speeds on motorcycles on the roads of Wales.

While it is undoubtedly frustrating to lose a hard-earned KOM — not least to someone not actually riding a bicycle — the ride-tracking app's evidence of road users exceeding 100mph (Matt says he has seen speeds as high as 112mph) is even more concerning from a road safety standpoint.

Perhaps @DyfedPowys should start checking @Strava for those who flout speed limits. Multiple times each weekend I get "Uh Oh" emails, so far the record is 180kph. I have no idea why motorcyclists have started using Strava, but I hope Mr Horton will sometime get what he deserves. pic.twitter.com/0Qhio77dKy

"I am getting emails constantly now [every time a KOM gets taken]. Motorcyclists seem to be regularly using Strava for road and off-road, with blatant speeding obvious to see," Matt told us.

"Highest I have noticed so far, 180kph (112mph) but I don't have a screenshot of that. But I might be able to dig around.

"It was e-bikes, then trail motorbikes and now road motorbikes seem to be using it, but I have no idea why. I put a tweet out and mentioned the local police, but no reply yet.

"After being flagged, lots are now changing to 'exercise' I guess to avoid them being pulled down. Many accounts are private, but this guy is not."

Matt also suggested police forces could use Strava as a tool for catching speed limit-flouting motorists uploading evidence of their law-breaking.

Strava's website says that "motorcycle activities are not allowed on Strava and cannot use the 'Ride' or 'E-Bike' activity types."

Should you have a KOM taken by a person using a vehicle, you can flag their activity and will almost certainly have your pride and glory returned.

The Ride activity type is for conventional human-powered bicycles (including recumbents) riding outdoors. Do not use this activity type if your activity includes data recorded while driving a car, motorcycle, pacing a vehicle, using an electric bike, or another electric-assisted vehicle, using a non-traditional bicycle with full fairings or aerodynamic modifications including velomobiles, or using a GPS simulator programme for virtual riding.

Please note that motorcycle activities are not allowed on Strava and cannot use the Ride or E-Bike activity types.

A spokesperson for Strava also told road.cc: "Being part of the Strava community is a commitment to respect: we respect each other, ourselves and the rules. When we all share mutual respect, we all win. Read our community standards here.

"That means that we rely on our global community to help us monitor the integrity of our segments and leaderboards. We ask our athletes to flag anything that doesn’t match our community standards – including mechanical cheating – which will be addressed.

"Strava values sportsmanship and fair play, and we want members of our community to earn spots on the leaderboards through clear and safe competition."