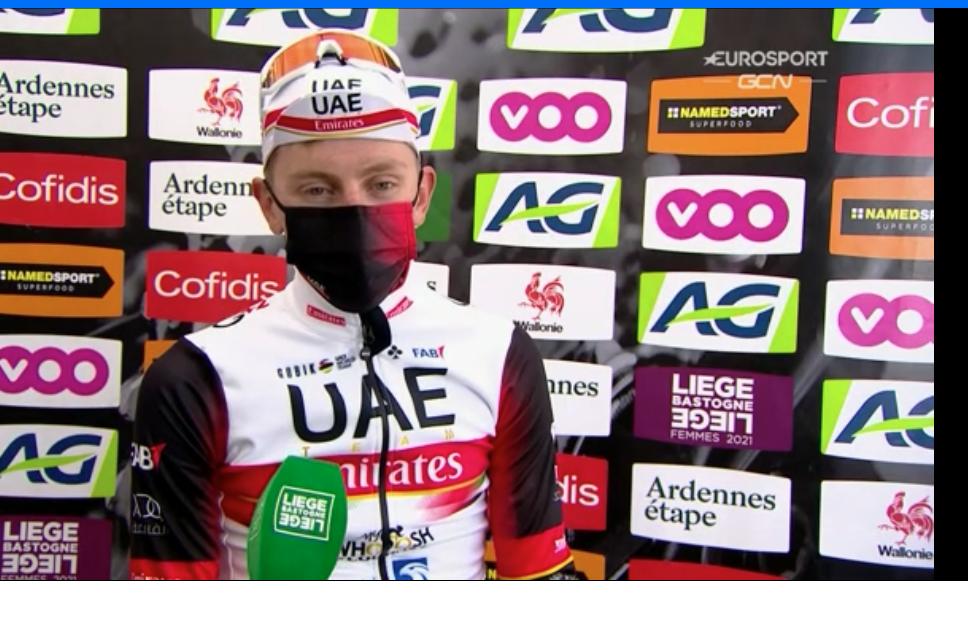 The 22-year-old said he was 'living the cycling dream'...
by Will Bolton

Tadej Pogačar outsprinted a group of five today to take his first victory at Liège-Bastogne-Liège.

His victory makes him the first reigning Tour de France champion to win Liège-Bastogne-Liège since Bernard Hinault back in 1980.

A quintet of riders went clear on the slopes of the Côte de la Roche-aux-Faucons with 13km remaining after a series of blistering attacks from Ineos Grenadier's Tao Geoghan Hart.

Valverde, who was looking to equal Eddy Merckx record of five victories at the race, led out the sprint with Alaphilippe coming through rapidly and looking like he had it until Pogačar just edged past him on the line.

Groupama-FDJ’s David Gaudu came in third, Valverde fourth, and Israel Start-Up Nation’s Michael Woods, who had tried repeatedly to get away in the final kilometres, came in fifth.

Speaking after the race, Pogačar said: "I am living the cycling dream. We were really disappointed we couldn't start Fleche Wallone because we had really good riders for that race...

"We were really motivated for today so we are really, really happy that today went like this."

He added: “I’m without words. I love this race and to win here against those names is incredible.

"In the sprint I knew that Alaphilippe was going longer and I stayed behind him. I was just lucky in the end it was a good wind for me because I was coming from behind and could come with speed. It's unbelievable."

Tao Geoghegan Hart led three of his Ineos Grenadiers teammates over the Redoute and the remainder of the bunch splintered behind them as the reigning Giro d'Italia champion ramped up the tempo.

With around 21km to go on the Cotes de Forges Richard Carapaz attacked and gained around 25 seconds on the pack.

However, when he hit the final climb of the Roche-aux Faucons, Deceuninck-Quick-Step and UAE-Team Emirates hit the front and swiftly closed the gap.

🎙 @TamauPogi : « I really love this race, it's amazing to win here. @alafpolak1 was the good wheel for me as I was coming from behind. »#LBL pic.twitter.com/hoyjUhgMaQ

Israel Start Up Nation's Michael Woods forced the final selection, perhaps not confident in his sprint against such formidable opposition, after desperately trying to get any sort of gap at the top of the very steep climb.

Pogačar, Alaphilippe, Valverde and Gaudu all followed and worked together well in the final few km's.

Defending champion Primoz Roglič (Jumbo-Visma) missed the move, seemingly unable to follow, and was kept company behind by two UAE-Team Emirates riders as he attempted, unsuccessfully to catch the front group.

Today's win comes after Pogačar and his team were forced to miss La Flèche Wallonne earlier this week after two of their staff tested positive for COVID-19.