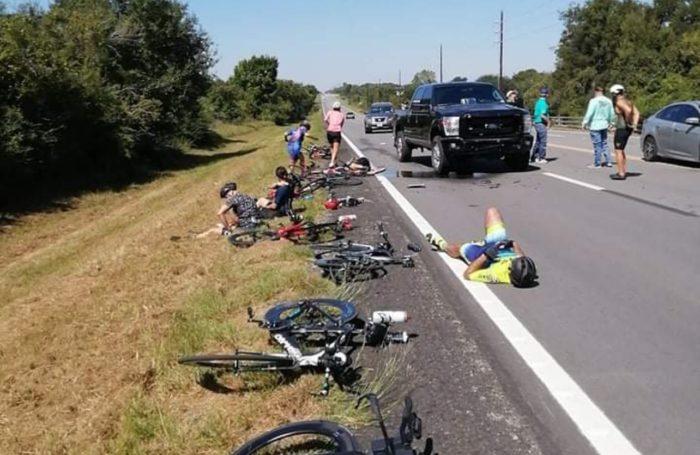 A teenager who crashed into a group of six cyclists in Texas after allegedly ‘rolling coal’ at them has been charged with six counts of felony aggravated assault with a deadly weapon.

Before crashing into the group of cyclists who were training for IronMan Texas, the 16-year-old had reportedly blown at them black smoke on purpose from the modified exhaust of a black Ford F-250 pick-up truck, owned by his parents Jason and Jennifer Arnold.

The process, which is known as ‘rolling coal’ and sees the exhaust emit thick plumes of black smoke, originated on the truck racing scene.

He remained at the scene of the crash, which happened in Waller, northwest of Houston, on Saturday 25 September but was only charged yesterday, more than six weeks later.

In a post on Facebook yesterday, the Waller County District Attorney’s Office said: “On September 25, 2021 a sixteen year old drove his truck into six bicyclists that were training through Waller County.

“Over the last six weeks this office has assigned its own investigators to seek out evidence, and to interview the victims and witnesses.

“We very much appreciate the patience of the victims and their attorneys as we have attempted to reconstruct the events, and to assess and gather the evidence that was not obtained that day.

“Today we have filed six felony charges of Aggravated Assault with a Deadly Weapon against the juvenile in question, one charge for each cyclist that was injured.

“Earlier today the juvenile voluntarily surrendered himself, and was detained by representatives from the juvenile justice department where he will be held in custody until further orders of the juvenile court.”

Rachael Maney, national director of Bike Law.com, which is acting for the victims, two of whom had to be airlifted to hospital, said in a blog post: “We have been eagerly awaiting this news for what feels like an eternity.

“We share in our community’s frustration, and understand with no confusion why cyclists who ride in Waller, across Texas, and all over our country have been sceptical and conditioned to expect little if not nothing from law enforcement and prosecutors in response to this incident and the overwhelming number of other bicycle crashes caused by negligent, aggressive, and criminal motorists,” she continued.

She said that District Attorney Elton Mathis and Special Prosecutor Warren Diepraam, who took over the investigation from the police, “have done their jobs to deliver what is a real step towards justice given what’s possible and what’s not within the Texas criminal justice system – a system that does not favour people on bikes and generally provides far too much room for police and other prosecutors to endorse the marginalisation of cyclists and other vulnerable road users through their historic inaction.”

She was also highly critical of remarks made last month by defence attorney Rick DeToto, retained last month by the teenager’s parents.

“If this crash was the unintended consequence of a ‘very new and inexperienced driver’,” asked Maney, “then why aren’t all 16 year old drivers of diesel trucks ‘rolling-coal’ and causing this kind of catastrophic harm?”

She also questioned, among other things, who had carried out the modification to the truck, and how such an apparently inexperienced driver would have known how to roll coal.

She added: “We’ve prepared ourselves and The Waller 6 to expect it all: relief, dissatisfaction, and a myriad of opinions to be expressed in response to this update. What we continue to ask of everyone is an understanding that (even in Waller, TX) when things feel like they’re taking more time than they ‘should,’ the possibility exists that something right and good, not more disappointing ambivalence to justice, is the cause for such delay,” and that Bike Law “will continue our dogged fight for justice for them and all people on bikes.”