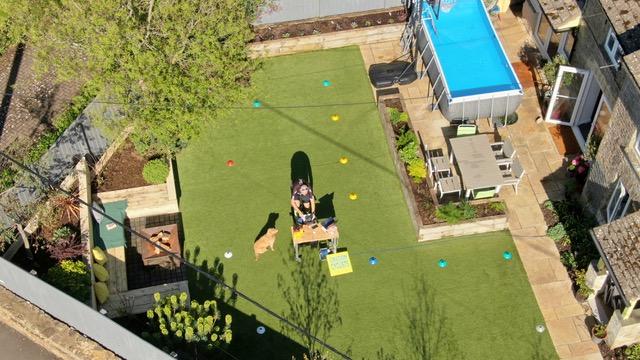 Triathlete completes Ironman in his back garden.

The challenge took Richard Groome over 14 hours, but he raised over £2.5k for a local charity
by Liam Cahill

Triathlete Richard Groome swam 2.4 miles in a paddling pool, rode 112 miles on a Wattbike and ran 26.2 miles around his garden (pictured above) to raise money for Malmesbury and District Foodbank.

So, what did you do on Sunday? We went for a little ride and spent the rest of the day on the sofa. Meanwhile, triathlete Richard decided to tackle a full Ironman in his back garden, starting at 7am and taking him until gone 9pm before he finally finished. 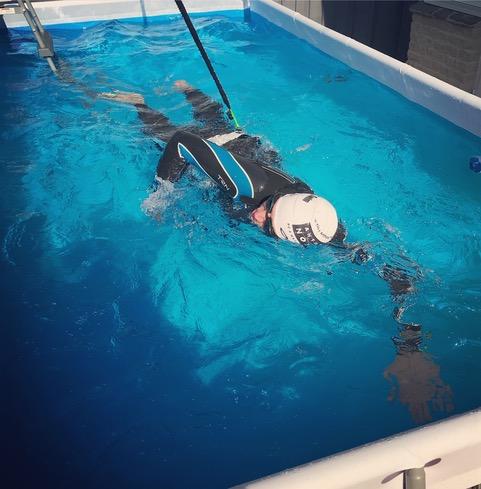 To complete the swim which Richard described as “fine”, he was tethered in his paddling pool and did front crawl for an hour and a half. If you thought riding on the turbo was boring, imagine swimming furiously and not being able to reach the end of the pool. For the bike, he made a quick transition to a Wattbike set up in the middle of his lawn where he spent the next 5 hours 38 minutes riding. This is where Richard says problems started to arise, “I sat baking in the sun” he said, citing the heat as a problem waiting to happen. “I definitely emptied the tank”, though the 180km ride was passed on a Zoom video call with a friend.

Richard says that this meant that he started the run feeling sick, hardly what you want when you’re just setting off on a marathon. The compact course around the garden didn’t help matters and Richard was unable to eat and forced to take anti-sickness tablets to get through. “I definitely now know why marathons are not normally run around 100m courses with 90, 180 and 270-degree corners” he joked when we asked him what the hardest bit of the challenge was.

Richard’s target was to finish the challenge in under 12 hours, but the sickness issues meant that he was still running after 14 hours. He’s still very happy to have raised £2,500 so far for a local Foodbank. If you’d like to donate to Richard’s GoFundMe page, you can do so here.