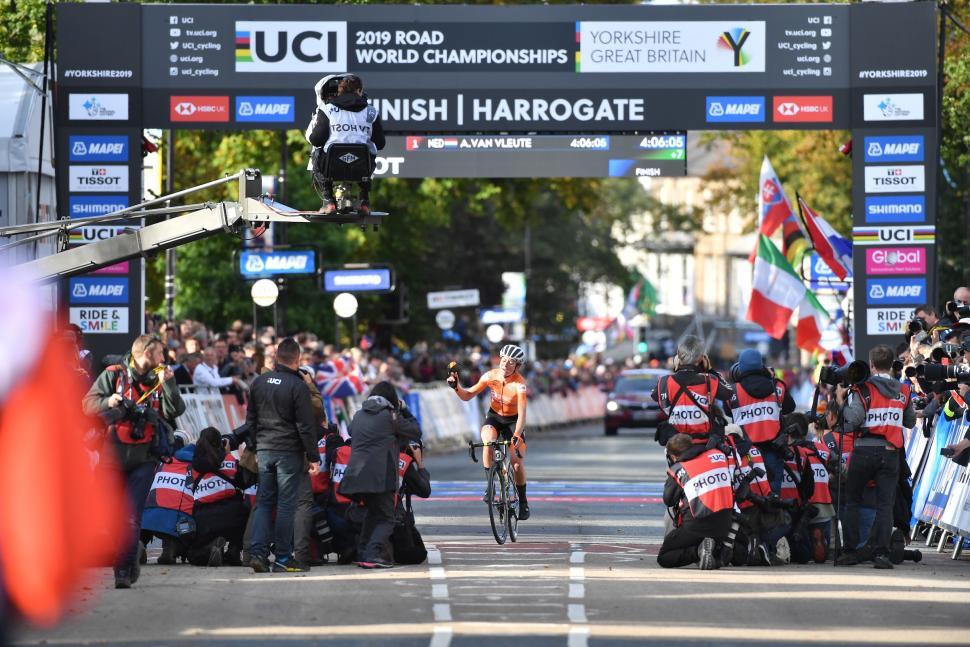 The UCI today announced the dates for next year’s inaugural combined cycling world championships in Glasgow. The championships, which for the first time will bring together 13 cycling disciplines for an 11-day “mega event”, will take place between 3 and 13 August 2023.

The event will award rainbow jerseys to over 190 world champions from the road, track, BMX, mountain-biking, para-cycling road and track, indoor cycling, trials, and gran fondo events. Cyclocross is not included in the new combined championships and will retain its traditional January slot.

Starting with the Glasgow championships in 2023, this multi-disciplinary event will be held every four years, each time taking place a year before the Olympic Games.

In Wednesday’s press conference, the UCI also confirmed the venues for some of the events. The Sir Chris Hoy velodrome will host the track racing, the BMX racing will take place at the Glasgow BMX Centre in Knightswood, George Square will mark the start of the road races, and Dumfries and Galloway will provide the backdrop to the para-cycling road events.

This quadrennial gathering of cycling disciplines means that next year’s world championship road events will fall between the Tour de France and Vuelta a España. It will be the first time since the mid-1990s that the road worlds have taken place in August, after they were moved closer to the end of the season in 1995 to accommodate the Vuelta’s shift from spring to late summer.

Track riders will also have to adjust their schedules, with the move from spring to August meaning their 2023 season will closely resemble an Olympic year when it comes to key objectives.

Away from the cycling world, the Glasgow championships are likely to coincide with the nearby Edinburgh Festival, which traditionally takes place throughout the month of August. As Glasgow tends to host a fair amount of festival-goers unable to find rooms in Edinburgh, accommodation for the worlds – once team delegations and media are factored in – may prove difficult, with the UCI estimating that one million spectators will attend the 11 days of racing.

UCI President David Lappartient told the press conference: “Bringing our existing UCI World Championships together at the same time and in one venue every four years was one of my visions before my election as UCI President in 2017. We have been working towards this ever since.

“I am delighted that the inaugural UCI Cycling World Championships will take place in Glasgow and Scotland. With their experience hosting high-level international sporting events, Glasgow’s iconic sports venues, and the stunning Scottish scenery, we have all the ingredients for an exceptional 11 days of competition.”

Paul Bush, Chair of the 2023 championships, also said: “This will quite simply be the biggest cycling event ever held and we are proud that venues in Glasgow and across Scotland will be used to create cycling history.

“It is an honour that the UCI has entrusted us with hosting the first ever UCI Cycling World Championships and we look forward to welcoming the cyclists, federations and fans from around the world from 3-13 August 2023.”