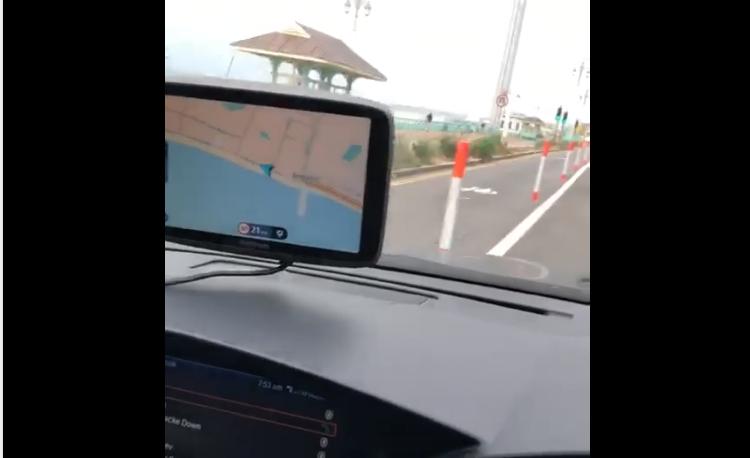 Brighton driver and wands via Facebook.PNG

“There you go, mate, they get a proper little bashing for you … Ooh, I’ve knocked me wing mirror off”
by Simon_MacMichael

Update: Sussex Police have said they are investigating a video we reported on yesterday that was posted to Facebook and shows a motorist driving into wands on an emergency protected cycle lane in Brighton.

The force told road.cc: “We are aware of a video circulating on social media which appears to show a vehicle colliding with bollards in a cycle lane on Brighton seafront.

“This has been reported to us, and our enquiries are ongoing to identify the driver and to establish if any offences have been committed.

“Anyone with any information about the incident is urged to contact us online or call 101, quoting serial 548 of 30/08."

The video itself, which was included in our original report, has since either been deleted from Facebook or made private.

Meanwhile, we have been told that the person the driver named as "my old mate" is likely to be Brighton businessman Robbie Raggio and not former West Sussex county councillor Robin Rogers.

Our original report, published at 1430hrs on Monday 31 August 2020 appears below.

Footage ​has been posted to social media of a Brighton driver deliberately clattering a row of wands forming an emergency cycle lane along the city’s seafront – resulting in him breaking his vehicle’s wing mirror.

The video, which appears to have been filmed by the driver, was posted to Facebook on 23 August by Julie Dawes.

She wrote: “Someone very close to me is a very bad boy … we really don’t need another cycling lane or Green Party to be voted in again.”

In the video, the driver can be heard saying: “This is for my friend Robin Rogers and your shitty bike lanes.”

To the background sound of the vehicle hitting the wands, he says: “There you go, Robbie, here you go, mate. Fucking load of bollocks, innit?

“There you go, mate, they get a proper little bashing for you.”

He adds with a chuckle: “Ooh, I’ve knocked me wing mirror off. Knocked it right off.”

There is no-one of the name Robin Rogers currently sitting on either West Sussex County Council, which is the local highways authority, nor on Brighton & Hove City Council.

A Liberal Democrat councillor of that name represented Worthing’s Northbrook ward on the county council until 2017 and did not stand for re-election that year, when the seat was won by the Conservatives.

Judging by the comments on the Facebook post, it appears a number of people are aware who the driver is, with several congratulating him, one saying “Only him.”

Another asked, “Hero … can he come and do Worthing too” to which the original poster replied, “lol they do bounce back again.”

Sussex Police was alerted to the video on Twitter, and we have asked them if they are investigating the incident.

According to local newspaper The Argus, there has been some vocal local opposition to the city’s temporary cycle lanes, announced in June and which opened the week before last.

In recent days, part of the same protected cycle lane, this section running from the Aquarium roundabout to West Street, was removed just days after it opened.

Green Party councillor Pete West, who chairs Brighton & Hove City Council’s environment, transport and sustainability committee, said: “Congestion on this stretch has had a knock-on for major bus routes and delays to bus journey times – that is unacceptable.

"Sadly, attempted changes to adjust traffic light timings have not provided the answers needed as there is still insufficient capacity for the volume of traffic heading towards West Street,” he added.

As we reported last week, the Bike Is Best campaign group, which brings together more than 50 cycle brands and organisations, wrote to Prime Minister Boris Johnson to warn that delays in implementing infrastructure projects and local authorities caving in to opponents of such schemes risked wrecking his vision of “a new golden age of cycling.”

> Bikelash! PM urged to act as fears grow that golden age of cycling could fall victim to govt delay and anti-cycling sentiment

We also reported how in a Low Traffic Neighbourhood unveiled last week in Ealing, planters designed to stop motorists using residential streets as rat runs had been vandalised or moved, with similar incidents happening in other London boroughs.