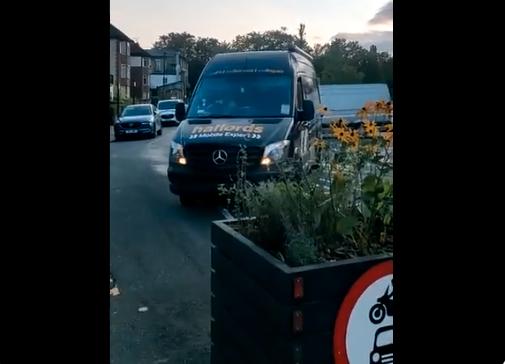 "Considering Halfords are a bike company it just seems really sh*t to show such disrespect for measures designed to make life less horrid for cyclists"...
by Jack Sexty

Updated: Footage has emerged of a Halfords Autocentre vehicle driving past a planter on a Low Traffic Neighbourhood (LTN) street, with the driver allegedly removing the front number plate to avoid detection from cameras. Halfords have now said the driver has been taken off the road*.

So yesterday a @Halfords_uk driver removed the number plate on his van so he could drive through the planters without being detected by the cameras in an Enfield LTN pic.twitter.com/DDc4duq8Y5

The first clip - shared by Sarah Berry on Twitter - shows the vehicle reversing in the road with its hazard lights on and front number plate removed, before proceeding to drive on past the barriers which are in place to prevent through-traffic. The road in Enfield is subject to a LTN scheme, intended to prevent drivers from using residential streets as 'rat-runs', and it is believed the driver removed the number plate to avoid detection and a possible fine for defying the restrictions.

Here he is taking them off. Considering @Halfords_uk are a bike company it just seems...really shit to show such disrespect for measures designed to make life less horrid for cyclists and pedestrians on the road pic.twitter.com/JUbZPxMbe4

Ms Berry shared another clip, in which she claims the driver is removing the front number plate. She also noted the irony of the driver showing disregard for the LTN, when they are employed by one of the UK's largest bike retailers, adding: "Here he is taking them [the number plates] off.

"Considering @Halfords_uk are a bike company it just seems...really shit to show such disrespect for measures designed to make life less horrid for cyclists and pedestrians on the road."

Halfords replied to the post, saying: "Thanks for bringing this to our attention @SarahJ_Berry. We’re absolutely committed to safe driving and would like to assure you we have launched an immediate investigation into this case."

Christo, are you actually- and by virtue of you tweeting as a @talkRADIO employee - advocating that the driver did the right thing?

In recent weeks, tension has been building in the capital over the installation of planters to stop rat-running drivers from using residential streets, and the appearance of 'wands' to create temporary cycle lanes. Supporters have said LTNs reduce emissions and encourage Londoners to get out of their cars for short journeys and commutes, while opponents have claimed some of the schemes have shifted traffic to other roads, and increased journey times for delivery drivers and commuters among other criticisms. Some people have actually defended the Halfords driver in response to the footage above, including Talkradio presenter Cristo Foufas.

In Wandsworth, the Conservative-led council have suspended their Low Traffic Neighbourhood scheme after they were met with resistance from a vocal minority, and claimed improvements made to the nearby A24 as part of London's Steetspace programme has led to ‘emergency access’ and ‘traffic flow’ issues.

Since this article was published Halfords have issued a statement, telling road.cc: "As soon as Sarah highlighted this isolated incident we made sure the driver was taken off the road. We’re sorry and would like to assure Sarah and all our customers that we take road safety very seriously and an immediate investigation has been launched.”