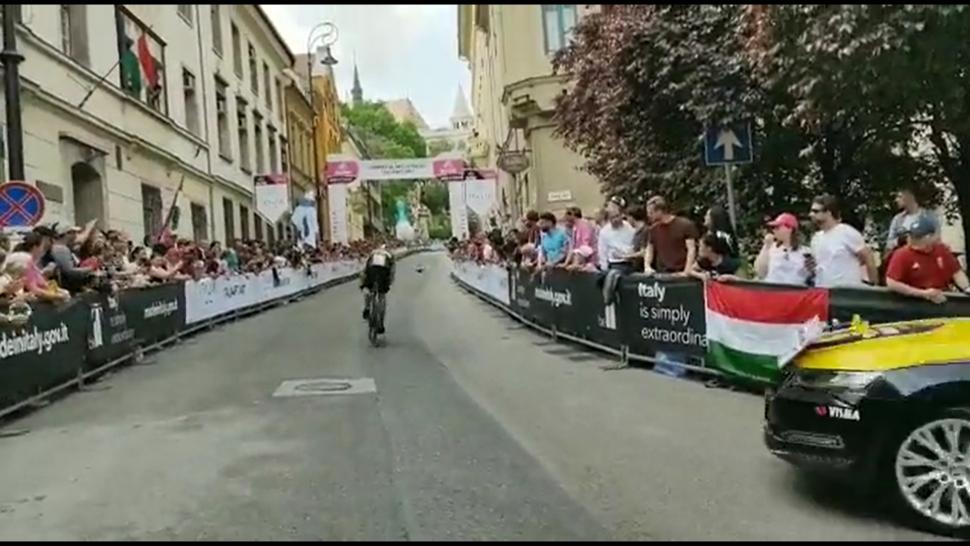 Edoardo Affini at least saw the funny side of the embarrassment: "Not difficult to climb faster than me!"...
by Dan Alexander

Always good to see those flash pro riders get humbled by an unassuming local not kitted (or should I say kittened) out in all the top gear...

Eight lives left for this little fella who narrowly avoided a charging Edoardo Affini aboard his Cervélo P5. We hear plenty of marketing spiel from bike brands about aerodynamics, weight saving, and stiffness — ability to withstand feline collisions, granted unsurprisingly, doesn't get a mention.

It's the latest instance of out-of-control fans getting too close to the action...first, Allez Opi-Omi. More recently, Yves Lampaert's crash at Paris-Roubaix, and now Puss in Cleats making one of the best TT riders in the world look, quite frankly, a little bit silly.

Keep your skinsuit, thirteen grand bike and year-round training...when you weigh 5kg and have catnip pulsing through your veins, you can drop any WorldTour pro...a purrfect pawformance.

We like to think a confused family in Budapest will get a call from an "interested" Yorkshireman called Dave B later tonight..."He says he wants to take Garfield out to an...altitude camp!?"

Edoardo Affini saw the funny side, at least...

Not difficult to climb faster than me😅🤌

Just when the Italian didn't think his day could get any worse, 'teammate' David Dekker was on hand to dish out some more dirt...

Even this lady can do that!!🤪 pic.twitter.com/HMZO2HUVaM

By the time our new favourite moggy was on the rollers warming down, Simon Yates was in the hotseat having set a stunning time on the city-centre course.

The Brit stayed atop the leaderboard for the rest of the day to take an impressive stage win ahead of the flying Dutchmen Mathieu van der Poel and Tom Dumoulin. Van der Poel keeps pink for tomorrow, at least, when we should have our first sprint stage. Mark Cat-endish and Caleb Meo-wan (genuine apologies you had to read that) are the pre-stage favourites...