The NiteRider Solas 30 is a powerful and versatile single-diode rear LED light with four modes and refreshingly long run times. It's literally brilliant for audax and weekend touring, though charging isn't a test of endurance. However, while adequate, the bike mounting bracket doesn't seem up to the usual NiteRider high standards.

The top-mounted switch is positive and features a battery life indicator, which changes from blue to red once the li-on battery's reserves slip below 25%. Depressed for two seconds, the diode springs to life in steady, which is amplified through a 180-degree red lens with collimator centre spot.

On its most powerful 30-lumen setting it's potent without singeing retinas like some über-lumen designs, which are distinctly uncomfortable to follow for any distance. Lithium-ion/polymer cells are less sensitive to temperature fluctuation than Ni-cads, and on this setting it returned 4hrs 28mins from a full charge in temperatures between 10 and -2°C.

Visibility is around 150-200m depending on factors such as competing illumination, fog and so on. Speaking of climate, the USB-chargeable Solas seems very well sealed, passing my hosepipe test convincingly. Those determined to ride in harsh conditions without mudguards might still want to add a lick of silicone grease to the port flap, just to make sure. 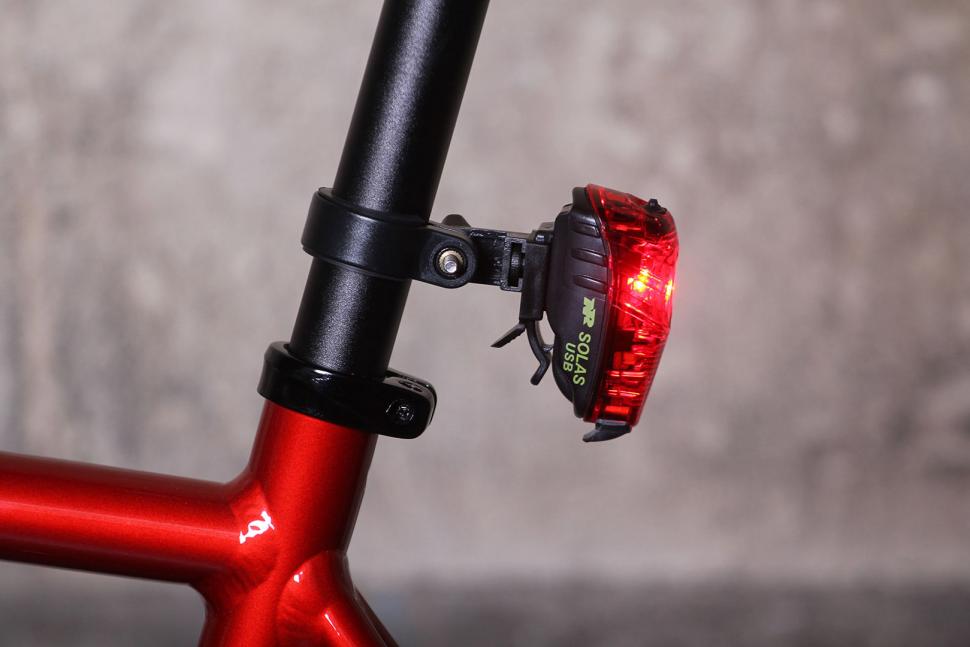 I was impressed by the ultra-frugal glow of the low power setting too – just what you need if joining in with the increasingly popular practice of running LEDs during the day. It's perfect for overcast afternoons or a week's winter touring when paired with a decent dynamo (it lasted almost 36 hours when fully charged).

The two flashing modes didn't disappoint either. Both are very distinctive, so it really boils down to personal preference and economy. The first will blink away for nigh-on 18 hours (17hrs 56mins by my timing), the latter 7 (6hrs 58mins).

In either flash setting, in the dead of night along deserted country lanes, my riding companions suggested they could spot me from a good 500m. This dipped to a very commendable 250/280m in town and that big, sturdy translucent casing comes in very handy when tackling junctions and roundabouts.

> Check out our guide to the best rear lights here

Although perfectly serviceable, the seatpost-mounted bracket isn't, to my mind, up to the same standard as the rest of the package. The clothing/luggage clip is super-dependable, though, and latches to jerseys, jackets and luggage like a scrapyard owner's Alsatian. Given the overall performance, £25 represents seriously good value. While its AAA-fuelled Cherry Bomb stablemate (tested back in 2009) has been my preferred option for four-seasons hell and ice commuting/winter training, the Solas's generous run times and (bracket allowing) solid build offer a convincing argument for dusk til dawn audax rides and more general riding.

Niterider says: "The Solas 30 has a powerful 2 watt LED, 4 modes (2 flash/2 steady) and is USB rechargeable. We've implemented what we call 'Group Ride Mode' for cyclists who still want to stay visible and safer but not annoy others in the pack."

Be Seen by cars = Be Safe

Very solid, aside from the distinctly average post mounted bracket.

Clothing/luggage clip was by far the most secure option; post mount wasn't what I have come to expect from NiteRider.

Very generous run times. Charge times are very reasonable for this level of performance too.

Overall, I've been very impressed by the Solas. Refined and well thought out, it's highly visible and enjoys generous run times in the flashing settings. Charge times are slower than some but relatively quick given the run times.

Would you consider buying the light? Yes, with a better bike mount bracket.

Would you recommend the light to a friend? Yes, if they did a lot of long haul night riding.

Potent, well made and frugal rear light with a moderate price tag, but mounting bracket distinctly average by comparison.