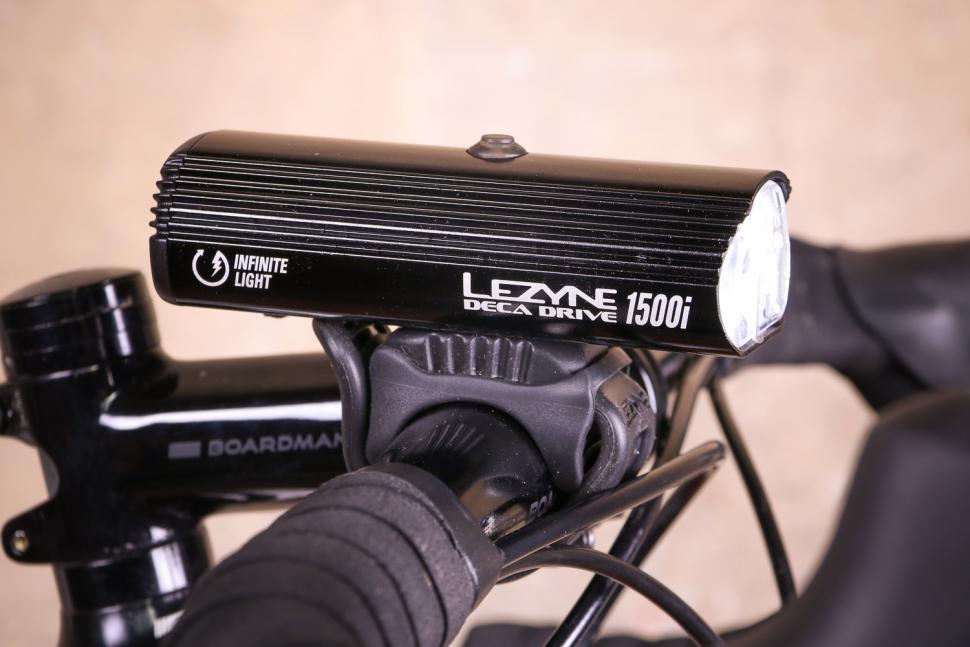 Lezyne's Deca Drive 1500i is right at the top of its range, and you'd expect it to offer some serious illumination, which it does. The i stands for 'infinite', and that means that the light has a port on the underside which you can plug an external battery into to extend the life. That gives you some pretty impressive run-times; this is a light that can easily cope with an all-nighter or even a weekender on one charge.

Obviously it's not 'infinite' in any meaningful sense; that would require you to carry an infinite number of backup batteries that would be both expensive and rather cumbersome. But I digress. What you do get is a light that's very good on its own, with the option to extend its run-time as and when you need to.

You can achieve the same thing with pretty much any USB-charging light by carrying a backup battery, and you can pick up some big backup batteries for a lot less than the £70 the Lezyne one adds to the cost of the light. But on the flip side, the Lezyne battery is designed to be mounted to the bike, and is IPX7 waterproof (submersible), and the light can be charged in situ and is still waterproof when the battery pack is plugged in. You can charge your devices from the battery pack too – there's a USB out at the other end – but the battery isn't waterproof when the port cover is removed, so it's not so much an on-the-go solution.

The Deca Drive has a rugged alloy body. It's finned, in the manner of a heatsink, but never actually got very warm when riding. At the front there are three LEDs pumping out the beam, which is more or less circular in shape. Stated output is 1,500 lumens – that's what the 1500 in the name refers to – but in beam testing it was more on a par with 1,200 lumen lights from the likes of Exposure and Ravemen. Different companies use different methodology to measure the total output of a light, so there's a bit of variation between manufacturers.

Anyway: it's really bright. Bright enough that I hit 72km/h on a nice open descent during testing without any worries about being able to see far enough ahead. On the road you're not really going to need more light than this.

Overdrive is great for the road

Hold down the power button for five seconds and you get into overdrive, which gives you just two beams. On the Deca Drive it's the 250-lumen economy mode and the full beam, and you press the button to toggle between them. That 250-lumen setting is plenty of light for pretty much any road riding at night save for throwing yourself down a descent, and you know that the full beam is just a click away when things start to go downhill, rather than having to cycle through the modes; on some lights you still have to go through off, or a super-low-brightness emergency mode, or an epilepsy-inducing daytime flash.

What's more, the button is really easy to use: light action but with a definite click, and well raised from the light body so it's easy to find even in thick gloves.

Having a wealth of different beam settings is fun, but in normal day-to-day use I generally only want two: one for riding around, and one that's really bright for when things start going quickly. So overdrive is perfect for that. Other manufacturers take note.

I'd like to see Lezyne following some other manufacters – notably Ravemen – in making more road-orientated beams for road riding. The Lezyne wastes a fair bit of light at the top of its beam, which is one of the reasons that the 1,200-lumen Ravemen PR1200 appears brighter in the beam engine: it's not putting out more light, but it is putting more of it where you need it. Interestingly Lezyne do make a range of STVZO-compliant (German beam standard) lights for the German market, but we don't get to see them here.

The clamp on the Deca Drive is a pretty simple rubber strap. You twist the light to make it easier to pull the strap round and secure it, and then twist it back once everything's in place. It's easy and quick, provided you have space on your bar to twist the light; sometimes the stem or a computer or bell can get in the way a bit.

This is a big light (261g for the head unit without the battery) and I wasn't convinced that the rubber strap would be up to the job, but it is, so that's me told.

The light never budged a millimetre even when the route dived off along bumpy towpaths and the like. The light does wobble a little bit because the rubber is, well, rubbery, but it's a wide dispersed beam and it's not noticeable like it would be with something that's more of a spotlight.

In overdrive mode you can run the light on economy for a claimed 19 hours. That's enough for two full nights of riding, even if you're adding in a bit of maximum beam for the tricky bits. At 1,500 lumens the light lasts a claimed 1 hour 40 minutes on its own, or 3 hours with the battery. I found the run-times to be reasonably accurate. The light will knock itself down to lower modes when it gets too hot, so it's difficult to test in a controlled environment with a stopwatch, but out on the roads I certainly got about an hour and a half of full beam, which is what you'd expect. You can have 64 hours of the daylight-running pulse mode.

Waterproofing seems up to the job: five minutes under the shower resulted in no problems, and it's been out in the rain without issues. The charge port for the external battery is tucked away under the back of the light, and is well protected from the elements.

Overall: a very good package, if it fits your needs

To consider buying this you're going to have to be considering some fairly big night excursions. The extra battery only really makes sense if you're genuinely going to be riding all night. If you're just commuting, or doing shorter night rides, then you can easily make do with the run-time from the Deca Drive on its own, and save yourself £70, or £100 if you get the Super Drive 1500XXL instead, which has the same output and run-times, but no infinite charge port.

The bump up to the loaded pack with the extra battery feels a bit over the odds given what you can get a backup battery for these days, but considering the light as a whole system, the £209.99 asking price is decent value given the output and the run-time.

The Deca Drive is an excellent light, especially in overdrive mode, and with the battery it's enough for a big audax or a 24-hour race, where you can use the battery to charge your phone as well without worrying about everything going dark.

You need to read the manual to understand what the charge indicator is doing, and how to access overdrive mode, but all good once you've got that sorted.

Light and battery are both IPX7, battery port on light is at the bottom so unlikely to be a problem with water ingress. No issues during testing.

You can ride for a long time on a decent beam, and the overdrive setting is very, very bright.

Great power from the beam.

It's a pretty weighty system at the best part of half a kilo.

Not cheap, but not bad value either as a package, although £70 for a piggyback battery is a bit over the odds, £100 if you consider that the Super Drive 1500XXL has the same output and run-time but is £30 cheaper without the charge port.

Would you consider buying the light? Maybe

Really good performance, super-easy to use in overdrive mode, easily runs all night. The extra battery adds more to the price than it should.