8
10
Well-designed lamp with sensible settings and scope beyond the suburbs
Weight:
163g
Contact:
www.madison.co.uk
How we test

The Kryptonite Alley F-650 pumps out sufficient bite for the backroads for a decent time. It also has a raft of sensible settings for town and around.

Behind the collimator lens we have a single diode fuelled by a rechargeable lithium-ion battery. This refuels via the standard android pattern port, which sits just behind the cowling, tucked out of moisture's way. Talking of which, I've given ours provocative blasts from the garden hose and left it in situ following sudsy bucket washes and it hasn't missed a beat. 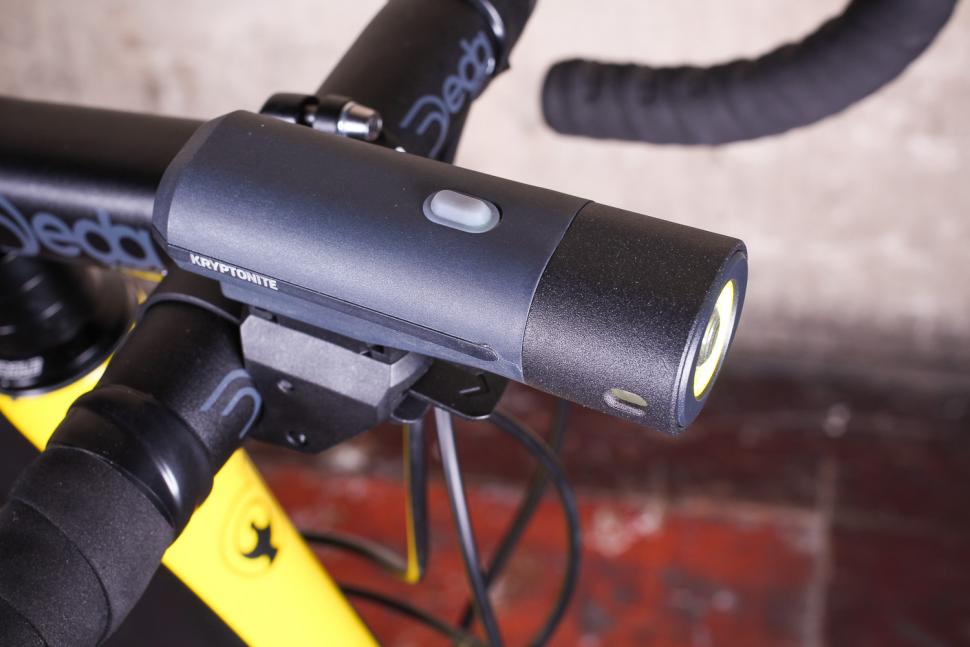 This is also very sturdy, with a slightly industrial flavour. Pull the serrated strap tight and the grip around standard and oversized diameters is positively vice-like. Attaching the light is simply a question of depressing a sprung button, while pressing the other channel firmly into the bracket. This may take a few attempts to perfect, especially if you've come from wraparound doughnut/watch strap designs. I've been inclined to take the whole lot with me when parking up in the street.

Powering up requires a sustained two-second press, so you'd be seriously unlucky to find it engaging in the bottom of a bag.

There are six modes: three constant, three flashing (well, two pulsing, one flashing, being pedantic). A single prod is all you need to change selection. There's also a memory function, which is very convenient.

The highest steady mode is 650 lumens, next 325 and the lowest 100. Then we have a 650-lumen daytime pulse, a nighttime pulse, cited as 100/300 lumens, and a 100-lumen eco-flash, which is reckoned good for 26 hours. It's probably not something you'd use very often but definitely welcome should you get caught out and need something to limp home by.

As I've come to expect from these commuter-plus models, it combines flood and spot beams. While lacking the purity of a 600/700-lumen trail type model, the flood gives plenty of presence in the seen with sense, while the spot allows you to pick out the detail and, theoretically, hammer along.

The lowest steady (100 lumens) is adequate for well-lit city streets, though I've tended to pair it to blinkies of varying capacities, since the side windows don't give much peripheral punch in this setting. These windows tend to get hidden by lever hoods, unless you are using a relatively long handlebar extension bracket. It's less of an issue on a more traditional flat bar build. Frugality is this setting's trump card – I've managed nigh-on the 12 hours cited.

Some might argue that medium (325 lumens) is a little overpowered for suburban duties but I've found its additional punch very useful, especially around dusk. Other traffic seemed alert to it at the 100 metre mark, and while a little underpowered for semi-rural speed-work, I've been able to hustle along at 18mph or so. It's great if you're needing to conserve some juice, giving, save for a few minutes, four hours.

Unleashing the full 650 rewards with a really useful pool of light. Unlike some others of comparable output, the centre spot's purity means deserted, unlit backroads are well within its comfort zone. I've been able to whizz along at 22-23mph on the flat and tackle 1-in-7 descents at 28mph without squinting. And provided you've angled the beam sensibly, there's no need to dip for oncoming traffic.

I was a touch perturbed to find the charge life indicator clicking to amber after 35 minutes but there's been no drop-off right up to 1hr 57mins, which is pretty much the 2 hours claimed.

The 650-lumen daylight pulse is incredibly potent, literally brilliant for very murky mornings and reckoned good to around 250m, maybe 300m, but I'd say overkill for general grey/overcast conditions.

I've found its 100/300-lumen nighttime counterpart setting much better for day riding and very useful in built-up areas, where it's about being seen rather than seeing with. A run-time of 9hrs 55mins from a full charge is pretty good going too.

Finally, the 100-lumen eco flash is quite perky, but its main draw is economy: a great bail-out in those instances where you've been out longer than planned, are running low on juice and need something to limp home on.

I've really enjoyed using Kryptonite's Alley. Getting a system that will deliver in all contexts without too much compromise is difficult. In keeping with competitor models, such as Moon's LX760, they're meant for moderate backroad detours. If unlit roads are your primary stomping ground you'd ideally look towards bigger numbers both in terms of output and price.

Personally, I would prefer a little more bite, say a 400-lumen medium and 150-lumen low, but otherwise it covers most bases handsomely and the run-times are more practical than many boasting similar numbers.

Well-designed lamp with sensible settings and scope beyond the suburbs

Save for describing it as a street light, Kryptonite clearly feels the specification does the talking. My feelings are that it's a solidly built torch type lamp with enough bite and settings for more adventurous commutes/training rides.

* FULLY USB RECHARGEABLE '' No batteries to buy or replace

Solid, especially for this end of the market.

Light itself is very user friendly.

Very secure and well engineered but removal re/fitment takes a little practice before becoming second nature; it's less intuitive/convenient than a hinged clamp, or those tethering to bars via rubber o-rings.

Very good in the everyday sense.

Sensible run-times in all modes. Charge times are similarly practical.

Accepting there are some trade-offs in terms of burn-time, the highest setting is much brighter than 650 lumens would suggest.

Feels particularly solid compared with others at this end of the market.

Overall, I've been pleasantly surprised by the Alley F-650. Although the output and beam quality don't compare with a trail-specific model boasting similar numbers, it seems genuinely brighter than many torch-type competitors. Bracket is super-dependable, which also helps when tackling unlit lanes at reasonable speed. Run-times are sensible, long enough when fully juiced for a bit of back road fun and with sufficiently frugal alternatives for semi-rural, suburban and town duties.

Nothing glaringly obvious, although it quickly becomes hot, especially in the higher settings.

Would you recommend the light to a friend? Well worth a closer look.

I think it deserves an 8 for its sensible range of settings and good build quality.