5
10
A clever auxiliary light that works fine to enhance a wider Cateye Sync system, but it's so expensive
Weight:
25g
Contact:
www.zyrofisher.co.uk
How we test

Cateye's Sync Wearable is an auxiliary light to complement its Sync app-controlled lighting system. As a standalone item, it is ridiculously expensive. But as a way to augment and enhance the rear visibility of a Sync light system, it's pretty effective.

I tested the Cateye Sync Core and Kinetic front and rear light set here, to which this Wearable can be added. In a nutshell, Cateye's Sync system uses a smartphone app to turn on your lights, see the battery charge levels, and change not only each individual light's function mode but even a group of lights' mode all at the same time. Setting it up is very easy and, although I'm not a huge fan on of the Core front light, this Wearable rear has a far closer relationship to the Kinetic rear when part of a Sync system.

It takes full advantage of the Sync system's 'Mode Sync' feature, which results in the Wearable replicating whichever mode the Kinetic main rear light is in. And through the Kinetic light's 'Kinetic' feature, the Wearable can also mimic the rear light's ability to act like a braking light and turn to a bright solid constant High mode when the Kinetic's inbuilt accelerometer feels the rider slowing down. (Because the Wearable doesn't have an inbuilt accelerometer itself, though, this function is only mimicry – when braking, a Sync Wearable won't turn constant High if used on its own.)

So what can the Wearable do by itself? Well, it can operate as a simple secondary rear light with a trio of extra features – namely, app-controlled remote switch on/off, mode selection and battery level indication. 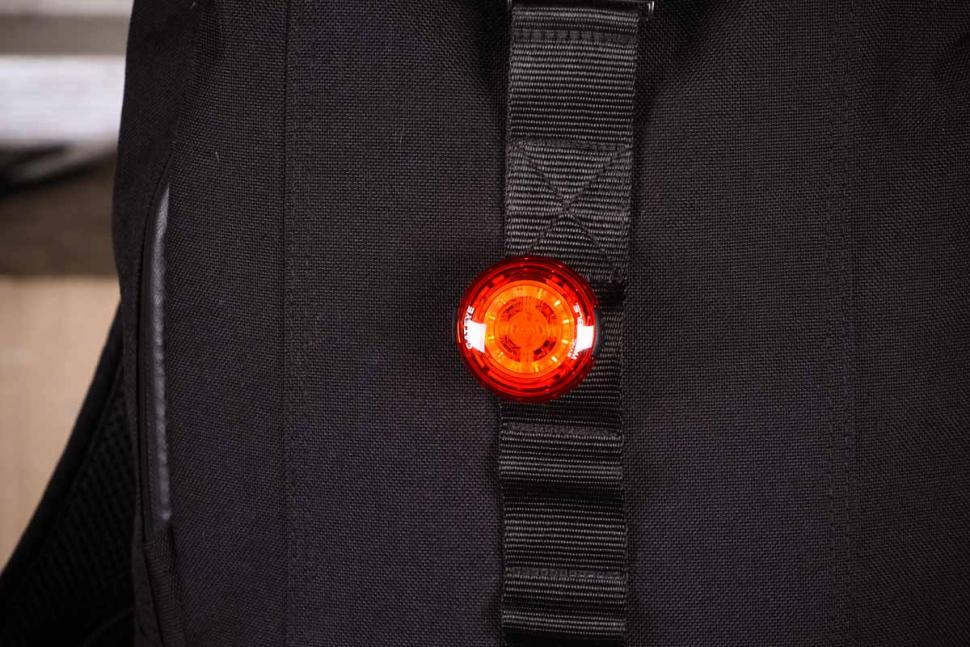 When it comes to establishing your road presence, those modes are fairly effective. The flashing options are the probably the most obvious choices, considering the enhanced run-times. They also make effective use of the Wearable's two rings of LEDs, one in the centre and one concentric outer ring. As with Cateye's Kinetic rear light, I like the social-rider-friendly Group Ride option, which shouldn't irritate anyone stuck behind you for extended periods, and the Daytime HyperFlash is unmissable, if potentially risky for any following epileptics.

I was quite impressed by the build quality of both Cateye's Sync Core and Kinetic lights, but the Wearable is a rung down from either of those two products. Although the LED arrangement is novel and effective, the body of the light is simple plastic and the rear clip to attach to clothing, bags and so on is very basic. (For years I've used a similarly sized Knog light that uses a high-power magnet to attach it to clothing, which has always seemed a far more useful system.) The Wearable does come with a rubber strap to mount it to a bike, but again, that's no high-tech solution. Consequently, at a penny shy of £49.99, the Wearable's value is really pretty poor. In fact, I can't see why anybody would choose to use a Sync Wearable as a solo product.

However, if you like the idea of the wider Sync system, my suggestion would be to use it in conjunction with just a Kinetic rear light (tested previously as part of a front/rear light set but available separately for £59.99). That way you could have an easy-to-use, manageable and effective rear light arrangement, albeit at a hefty price.

A clever auxiliary light that works fine to enhance a wider Cateye Sync system, but it's so expensive

It's an auxiliary light used to enhance a rider's visibility.

Cateye says: "The enhanced visibility of CatEye SYNC in a wearable light. When used with the other lights from the CatEye SYNC family, SYNC Wearable gives you an extra way to be seen, day or night. Using the mobile app, SYNC Wearable can be synchronized with SYNC Core and SYNC Kinetic for 360-degree visibility."

Clip-on bracket for easy installation to bags and clothing

Simple to set up and use.

The LED design is novel and effective, although the clip to attach it to clothing or luggage is very, very basic.

Really well – no problems in any conditions and the rubber bung protecting the mini-USB charging port is very good.

Good life on flashing modes, and recharge time is fairly fast at just over two hours.

It's decently bright and there are enough modes to satisfy most requirements.

I don't like the look of the rear clip in terms of long-term use, but no problems so far.

At £49.99 for a simple (if clever) auxiliary rear light, this is very, very expensive.

It works well as part of a wider Cateye Sync system.

Not particularly favourably. Even Cateye's non-Sync version is almost half the price.

Would you consider buying the light? Nope

Would you recommend the light to a friend? Only if I thought they had too much money.

It's a decent enough auxiliary light, and the Sync features are clever, but at this price it needs to feel much more like a premium product.