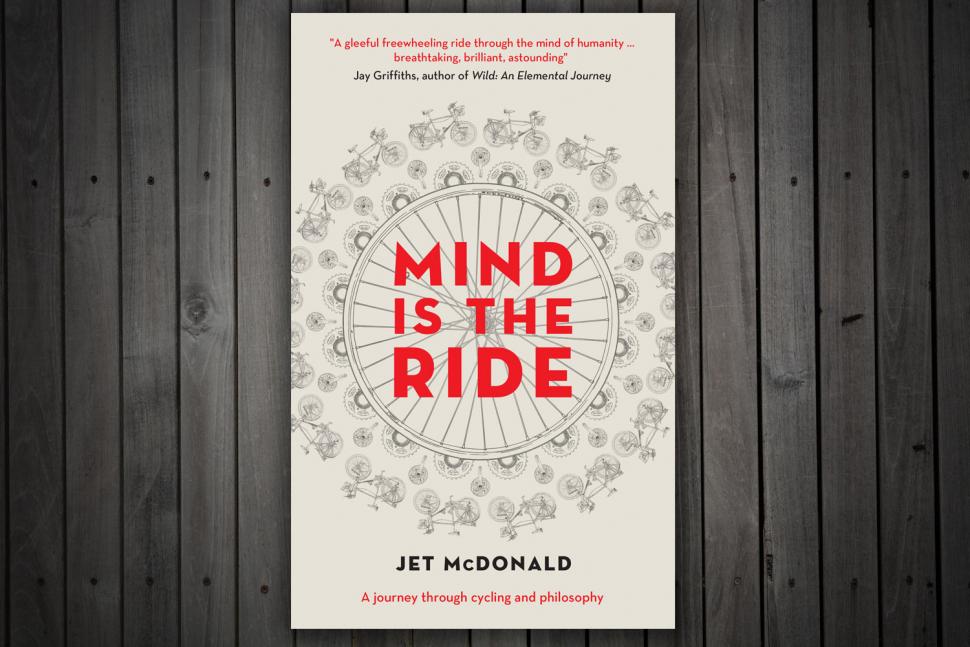 Mind Is The Ride by Jet McDonald

Mind is the Ride

Mind is the Ride could be described as philosophy for beginners, aimed at cyclists. Rather than write a conventional cycling travelogue, Jet McDonald uses his ride to India as the basis for an exploration of philosophy. The result will expose readers to more philosophy than they might normally encounter, but with enough cycling to provide some familiarity. It may be the first such combination, and it is certainly a successful one.

We had advance notice of this book in a review of Boneshaker magazine's Bicycle Stories, and after a successful crowdfunding campaign it has now arrived.

We are promised that we will be taken 'on a physical and intellectual adventure from West to East using the components of a bike as a metaphor for philosophy', and that McDonald 'playfully uses bike parts and bike riding as a metaphor to help untangle our relationship with the world around us'.

I thought the book would appeal to a similar audience as the Boneshaker magazines, especially as 'some of the chapters...began as articles for the magazine'. However, the more publicity material I read, the more fearful I became that it might not be for me: maybe there would be too much philosophy and not enough cycling for my taste?

A peek at the bibliography compounded my fears: of the 12 pages of books referenced, barely a tenth of them could be classed as cycling books. Amongst the others, there were an alarming number where I couldn't even understand the title – 'Sufism and Surrealism', or 'The comparative anatomy of angels', for example.

To my surprise (and relief), while philosophy is definitely present, I didn't find it impenetrable – with what there is being largely built around a more familiar cycling travelogue. The philosophy is structured such that each chapter is 'based around a single component and as the journey from Bristol to India progresses, more parts are added and more philosophies explored'.

Each chapter is accompanied by a line drawing of the relevant component, 'until, by the end of the book, the journey to India has been completed, a wayward path from Western to Eastern philosophy constructed, and a bicycle built from the parts that make it'.

The core of the book is the telling of that cycling trip, during which McDonald encounters many of the challenges that are familiar to anyone who has done such a trip – or has read about one: food, water, accommodation, navigation, crashing, maintenance, and so on. If you only want to read about a cycling trip then this isn't really the book for you, because the cycling element is really a Trojan horse to allow McDonald to introduce his philosophical discourses.

Mind is the Ride is a rewarding read, but not a lightweight read: I occasionally had to go over some sentences again, realising that I had not really taken in what had been written. I have never before seen the apostrophe in Rob Penn's book It's all about the bike described as something that 'joins the fleeting particular to the immutable universal', but it did make sense in context.

Not surprisingly, such mind-stretching sentences were more frequent during the philosophical elements, but again things normally became clearer once I had re-read the piece. I am still not ready to debate phrases such as 'Existentialism is built on something called phenomenology', but perhaps I do have a slightly greater understanding of the topic than before.

I don't have many books like this on my (cycling-orientated) bookshelves: one reason is that there are simply not many of them out there to start with, and another is that it is not the sort of book I would normally seek out – but in this case I am glad that it came my way.

I had a similar experience with Paul Maunder's Wind at my back, which I think would appeal to the same audience.

Make and model: Mind is the Ride by Jet McDonald

A gleeful freewheeling ride through the mind of humanity...

Published by Unbound in association with Boneshaker, Mind is the Ride is not just another book about cycling (though it's certainly a hymn to our two-wheeled friend). Across its pages, Jet playfully uses bike parts and bike riding as a metaphor to help untangle our relationship with the world around us. He thoughtfully plays with the nature of reality in an age of capitalism. In a fun way.

Mind is the Ride is not just a feast of ideas, but also of illustrations, in keeping with Boneshaker's handcrafted aesthetic – with beautiful illustrations of each component, drawn by Dawn Painter, introducing each chapter. The illustrations are added, part by part, so by the end of the book a bicycle has been built from the parts that make it and the mechanics of cycling turns into the exhilaration of the ride.

Title: Mind is the Ride

I have had little exposure to philosophy before, but found some of it to be very interesting.

Can be quite hard to digest at times.

Did you enjoy using the product? Yes: more than expected.

Would you consider buying the product? Yes, now that I know about it – but it is not the sort of book that I would normally seek out.

Would you recommend the product to a friend? Only to certain types who might appreciate it.

It is a unique style of book that won't appeal to everybody, but if you want an introduction to philosophy with the reassurance of a connection to more familiar ground, then you are unlikely to find better.