7
10
Great frame, but the rest of the kit doesn't match it… especially the tyres
Weight:
8,800g
Contact:
www.chainreactioncycles.com
How we test

'We present the Dark Plasma. Carbon fibre frame. Quality components. Top performance. Affordable price.' say Vitus on their website, well it's only polite that roadcc takes a look to give a second opinion.

Vitus makes a return to the UK market via Chain Reaction Cycles with a road range of 6 of which the Dark Plasma is the start of the carbon framed bikes. Aimed at the recreational / club racer the Dark Plasma is marketed at a very busy price point up against some very good competition. 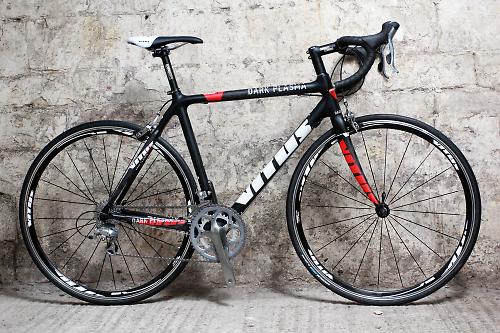 A custom moulded high-modulus carbon frame and fork finished off with a 12k weave are at the heart of the Vitus and a very good frameset it is to. The thick tubes and differing profiles look great as does the flowing arc of the toptube into the wishbone seatstays while the finish is impeccable with that 12k finish peeping through behind the logos. At 8.8kg (19.4lbs) the Dark Plasma is far from lightweight which is mostly to do with the components but the frame seems to shrug this off as it feels light when you are riding it. 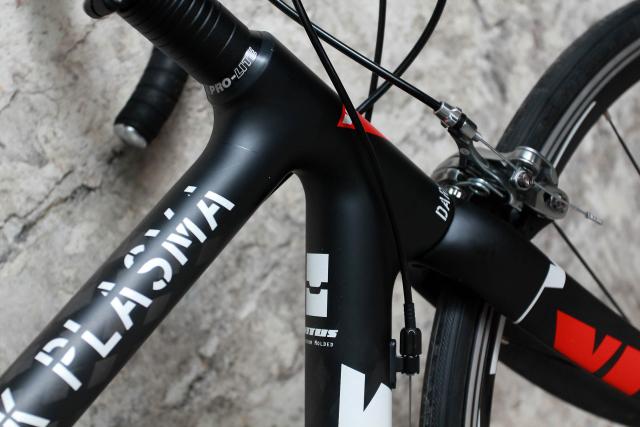 The frame provides a very stiff ride yet without any form of road vibration getting through to your contact points and just loves to be pushed hard. A shortish headtube giving a low front end (shop models won't have the huge amount of spacers our test model comes with) and the stiff full carbon fork means handling is kept tight tracking wherever you point the handlebars. That short headtube also makes the Vitus ideal for the odd time-trial where a set of clip-ons should keep you in an aero position meaning the Dark Plasma is very versatile.

Every bike has compromises in terms of equipment to hit the necessary price point but these are quite noticeable on the Dark Plasma due to the money that's been put into providing such a great frame. A complete Tiagra groupset (apart from a SRAM cassette and KMC chain) provides reliable shifting if not the most refined compared to Shimano's 105 and above groupsets, at times the shifting feels almost stodgy which is at odds with the stiffness coming from the frame and fork. 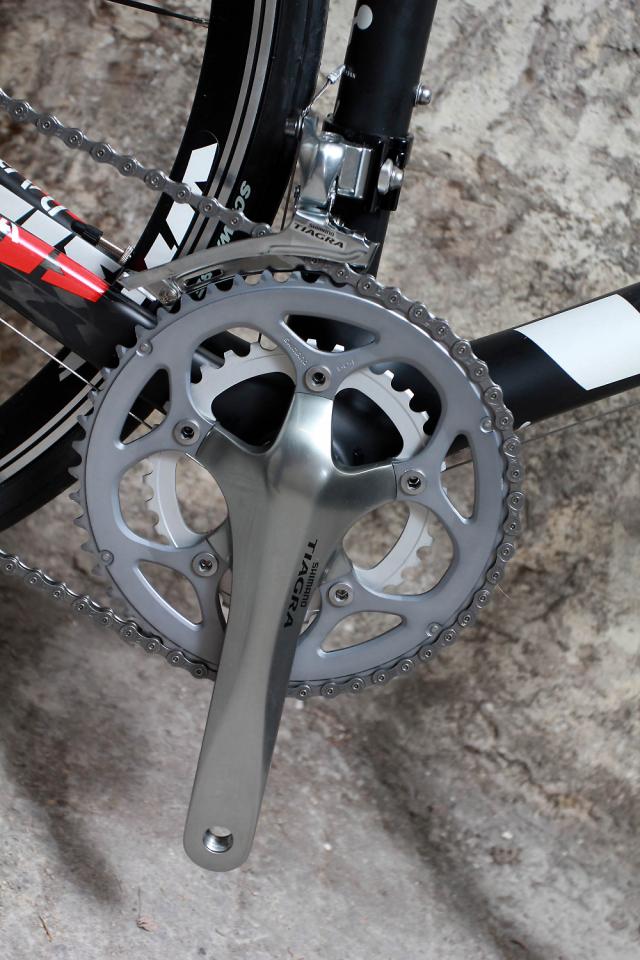 A 12-26 tooth 9 speed cassette paired with the 34/50T chainset gives plenty of gear range to continue the do it all theme that Vitus are aiming for. The brakes though are another story. Stopping distances are just scary. I'm guessing its down to a really hard pad compound that just doesn't grip the rim I've had similar experiences with these rims before the calipers themselves are fine it's just the standrd pads that are the issue.

The wheels are Vitus branded Pro-Lite which look good and stayed true throughout the test period. A bit on the hefty side but they roll well and no side to side flex was felt on the climbs or descent. There was some play in the rear bearings after about 700 miles which will be easily sorted with a bit of adjustment. The first upgrade to make though are to the tyres, Schwalbe Blizzards are just about the deadest tyres I've ever ridden. Grip is good but they just spoil the ride taking all of the feeling out of the frame. For a part of the test period I swapped the for some Hutchison Fusion 3 tyres and the ride was completely transformed, the bike felt much livelier and the feedback was great. 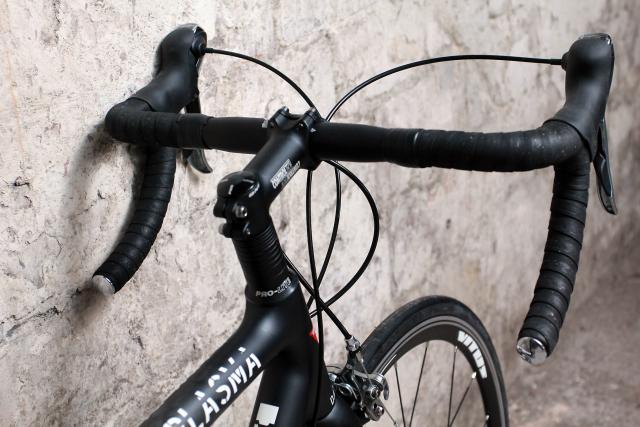 The stiffness of the frame is complemented by the Controltech One components, the oversize bars feel solid with no flex and the performance from the stem matches. An alloy seatpost with a 31.6mm diameter shows how good the frame is at distributing road buzz as this is about as stiff as you can get. The Vitus saddle is comfortable with just the right amount of padding and a bit of nose flex when you are on the drops. 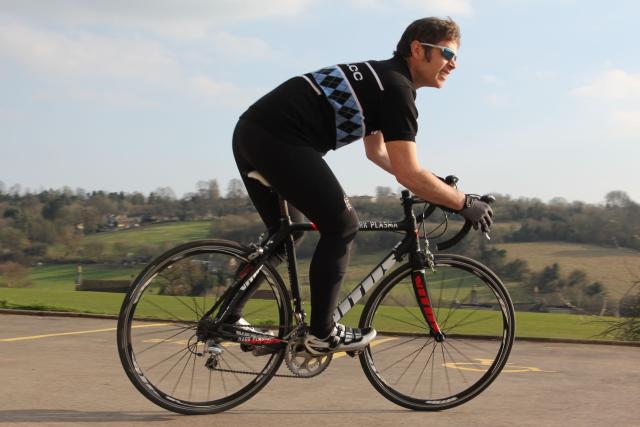 Overall the Dark Plasma is a good bike but the frame far surpasses the kit level on offer. With competition from the likes of Focus, Ribble and Planet X all having carbon framed bikes at the £1000 mark I don't think the Vitus is going to get the recognition it deserves. This bike is likely to be bought as a first serious bike once the purchaser has decided to invest further into the sport and I think the spec levels of the competitors will outshine the Dark Plasma. The frame is great and a joy to ride plus its ripe for upgrading but I do think Vitus are missing a trick here by not offering a frame and fork only option as both Ribble and Planet X do. At the very least change the tyres and no matter what type of riding you do you the Dark Plasma will perform. In its current build the Vitus is just missing that little bit of spark to make that step from great frameset to great bike.

Vitus have aimed the Dark Plasma at the recreational racer/club rider. Ideal for Sportive, audax, racing. I agree that it'll take most things in its stride.

Top tube length was pretty much bang on with what you'd expect for its size.

Yes stiff where its needed, bottom bracket area for one

Very well, no flex felt through the frame and fork. Let down though by the tyres

Yes, not to much of a problem once you know its there. only really likely to happen at a standstill

Handling was surefooted and tracked well, although lively the sterring wasn't sketchy

The frame/fork and the Controltech components are very stiff

Rate the bike for efficiency of power transfer:
7/10

Everything works fine but it lacks the confident feel of the newer Shimano groupsets, almost feels a bit spongy

Rate the wheels and tyres for performance:
5/10

wheels were pretty good, small issue with play in the bearings

Tell us some more about the controls. Any particularly good or bad components? How would the controls work for larger or smaller riders?

All works well, super stiff and nice ergonomics on the handlebars

Did you enjoy riding the bike? 50/50 with different tyres it was a much better ride

Would you consider buying the bike? No

Would you recommend the bike to a friend? yes, its worth considering for the frame and fork alone

If this was a test of the frame and fork only it would get an 8 as I feel it really is that good. This one was a real toughie to review. It's a bike that works as parts but just doesn't seem to gel as a package. The low marks are mostly down to the tyres, I know I keep going on about them but they really do spoil the whole feel of the bike. If you can afford it I'd go for the Dark Plasma VR as its upgraded to the new Shimano 105 which due to the solid performance and improved ergonomics will complement the frame much better. On the other hand you might also want to check out In terms of the value I was comparing it with Ribble's carbon frame, both different in terms of ride but the same in performance and quality but with the same build the Ribble is £200 cheaper and even with the new 105 it's still £50 cheaper. 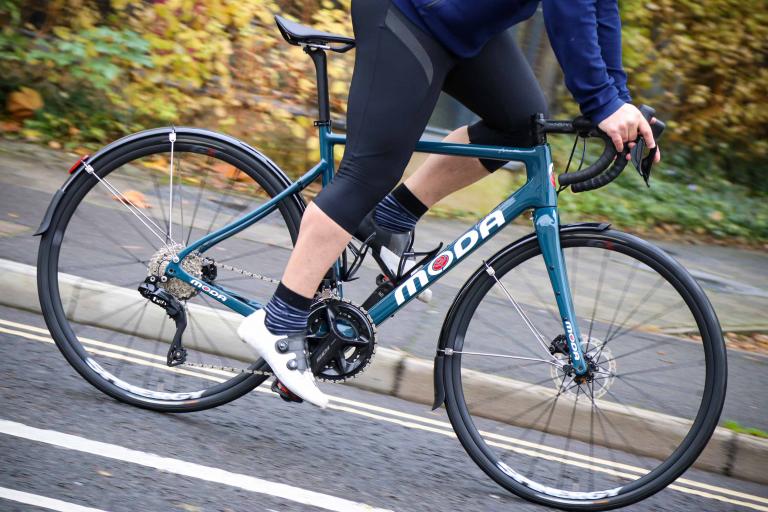 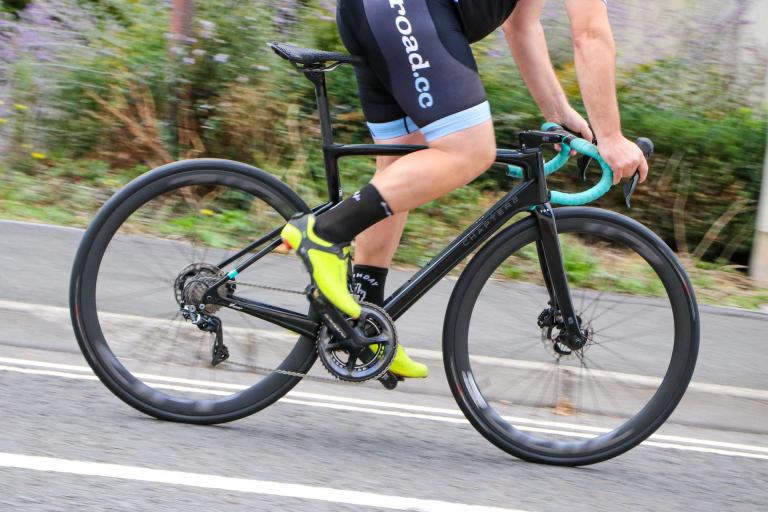 Impressive stiffness, performance and comfort, with the bonus of limited edition paint jobs 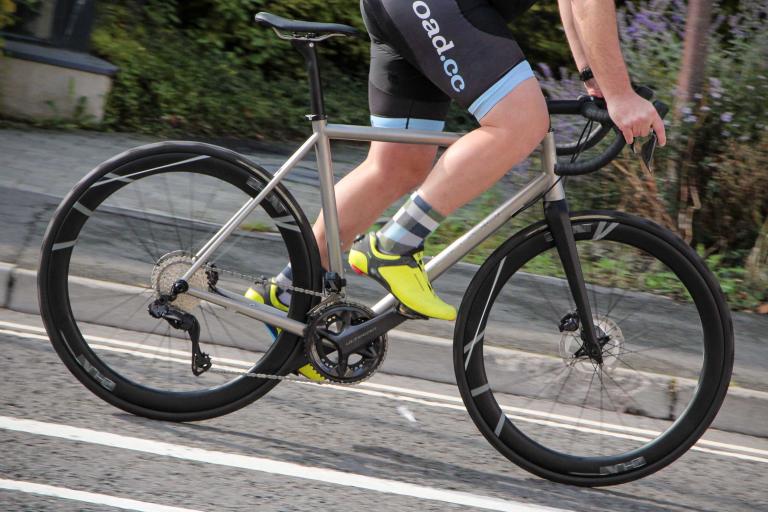 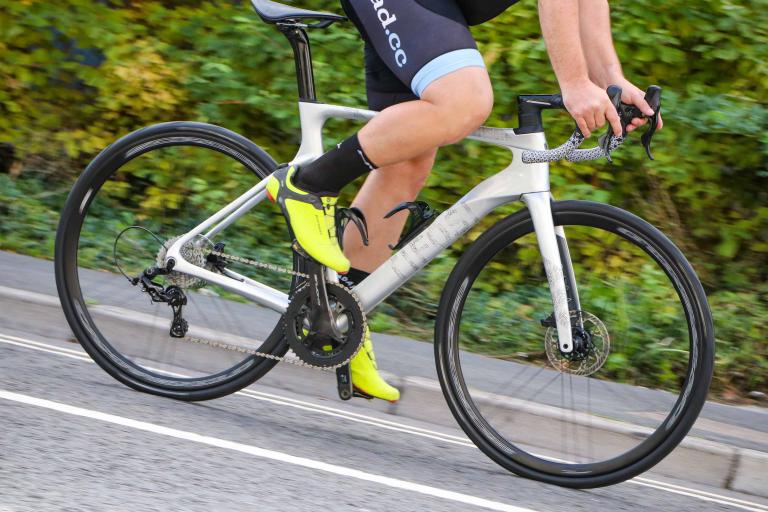 Quick-handling race machine with an aero advantage, but will benefit from a wheel upgrade