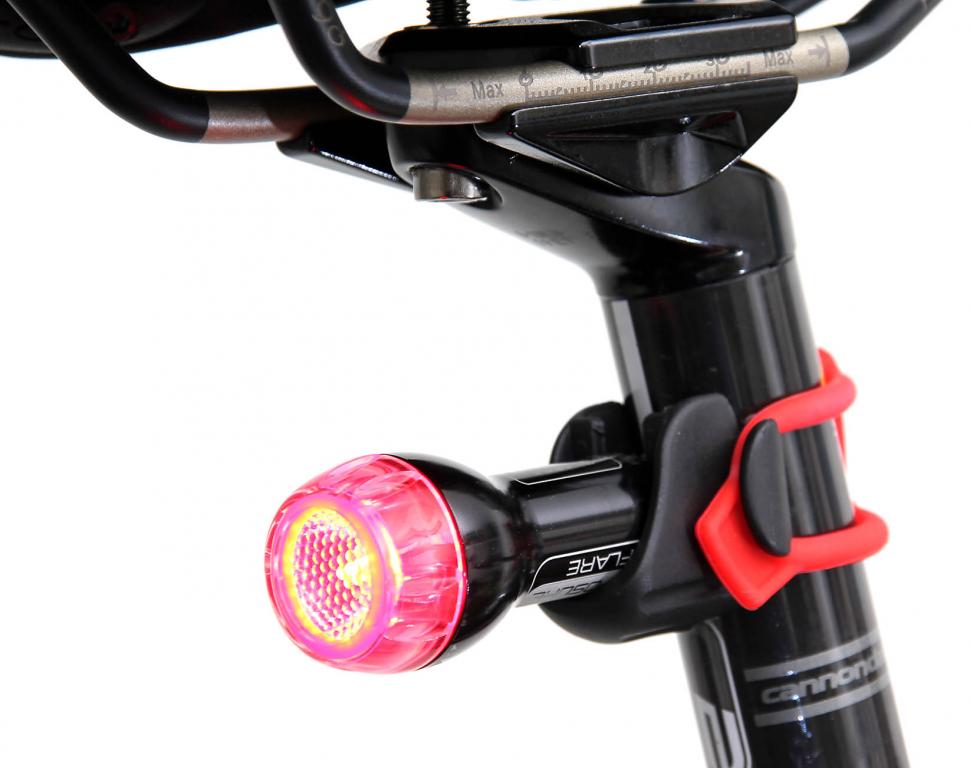 The Flare is the self-sufficient rear light from Exposure, a development from their Red-Eye rear light that sucks power via a lead out the back of one of Exposure's powerful Joystick off-road lights. The tidy little Flare runs off a single CR123A battery - a squat camera battery to you and me. It pushes out a bright 75 lumens of red light via a Seoul P4 LED. Exposure say there's 9hrs of constant light to be had with a disposable battery and 3hrs with rechargeables, or 22hrs and 8hrs respectively in flashing mode.

The Flare is pretty much moulded in to its moulded bracket so it's never going to bounce out and the whole combo is so small and neat that they really don't need to come apart anyway. The seatpost bracket is also angled so the light points horizontally when mounted, although it can be flipped so the Flare points slightly down, which handy if you ride in a group and don't want to blind the rider behind. The bracket's silicone band will stretch to fit seatposts from 25.0-34.9mm and, because of the shape of the bracket and flexibility of the band, will also wrap round odd-shaped aero seatposts and seatmasts too. This stretchy attachment makes it easy to swap the light between bikes or to remove it for security when commuting.

This Flare has been switched between road, cyclo-cross and mountain bikes with a variety of seat-tube sizes, without recourse to screwdrivers or faffy shims, and that silicone band has kept it securely attached to every seatpost it's been on. The little light's been vibrated along stuttery tarmac and bounced off-road and it hasn't wobbled or made a launch for freedom into the verge.

Turning the Flare on and off is a matter of simply twisting the lens clockwise or anti-clockwise. To change the mode from constant to flashing, or vice-versa, is just as easily done by turning the Flare off and on again within three seconds. Otherwise, it turns on in the same mode as when it was turned off. The one-handed on/off operation, turning the whole lens, means there's no fumbling about trying to press fiddly power buttons with thick winter gloves on. With a bit of practice, the light can be operated on the move, should stopping ruin your PB. Indeed the fact that bracket and light are effectively one-piece is another advantage when it comes to on the move operation because the light doesn't swivelin it's bracket when you are trying to twist the lens something it's front light equivalent, the Flash, does.

The flashing mode isn't an on/off flash. The light is on constantly with the flash pulsing over the top. It makes the Flare a powerful visibility aid, even in daylight, and is great for peace of mind in the city or riding the lanes into the sun. The lens is diffused and about 1cm deep so there's a certain amount of traffic-useful side visibility there as well.

The Flare's PR trick is to be dropped into a pint of beer and to stay working until people get bored, or someone wants their beer back. It's a stunt that works in the real world too. All very entertaining of course a more real world test would be to fire beer at it in all directions in the way rain and spray is forced against a bike light on a stormy day. You might get asked to leave the pub though.

So how does its weather sealing stand up to real world conditions? I kept the Flare on the back of my bikes all winter, even when it wasn't dark, just to get it covered in as much road grime and puddle splash as possible. It's refused to roll over and die. .

With no on/off buttons to press, a traditional weak point with lights for moisture to enter, and an O-ring seal between the lens and the CNC aluminium body, water and anything else that might be flung up by the rear wheel or fall from the skies has a hard time getting in. As a result, the Flare hasn't faltered due to internal dampness and hasn't had to be put in the airing cupboard to dry out. Dave and Tony have also put a winter and more's commuting time in to the Flare with no problems on that score either

Battery life has been hard to gauge against Exposure's claimed figures as it's been used in a real-world random configuration of flashing and constant modes. But the supplied battery is lasting well, definitely on a par with other proper battery lights, and markedly better than those that use dinky watch-style batteries.

On the road, the Flare is an impressively bright 75 lumens, so bright that the spotlight burst of red actually casts a wide pool of light over the rear wheel and onto the road, further contributing to visibility. Its first ride out was on pitch black country roads and it was instantly apparent that cars were showing more respect, hanging back and taking a wide overtaking arc rather than the usual forcing past without hesitation. It inspires a plucky confidence to shadowy riding. Riding behind a pair of night time cyclists, one with an Exposure Flare and one with what was once considered a decent enough blinky light, revealed how much brighter, more visible and road owning the Exposure is.

The Flare is lightweight and unobtrusive enough to appease the most image conscious of fashionistas worried about a bike light spoiling the exquisite lines of their pride and joy. But if even this makes you tut when you're looking at yourself in mirrored office-windows, then it's diminutive enough to be lost in a pocket until it's dark enough for no one to see your faux pas.

It's not all sweetness and light, though. A little care has to be taken when changing batteries: gentle finesse is required to screw the plastic lens unit into the metal body as it can cross-thread if you're genetically blessed with fists of ham. If you're on a really muddy and gritty commute, or pop them on an off-road bike for dusky muddy fun, then the thread in the gap between the light and the body can fill with gunk, which makes it hard to tighten the lamp to turn it on and off. And as the light lens is knurled and recessed it traps and holds onto dirt too, effectively reducing its light output. Dirt isn't a big problem, however, because the waterproof Flare can be chucked in with the washing-up whenever it gets a bit grubby and needs a clean.

Crap can also get caught behind the silicone band, scratching the seatpost when the light gets knocked around in random nudgage. This is especially obvious on carbon seatposts, where the lacquer is easier scarred. I had a heart-stopping 'cracked carbon seatpost?!' moment until I realised what had caused the hairline scratches.

If you use a rechargeable battery, you'll need to pay attention to how long the light has been on, because when the battery fades it fades fast. (That's a general problem with rechargeable batteries not the light per se.) A spare battery in your pocket or bag is a prudent precaution. Exposure can help here by selling you a charger set that consists of a mains charger and two re-chargeable Li-ion batteries.

The final caveat is that it's pretty much a seatpost-only mounted light, so if you're keen on fixing a light to a seatstay or pannier rack, or even yourself, then you'll have to look elsewhere.

On the whole, though, it's a light fantastic (that's enough light puns - ed). The initial cost might seem high but it's significantly brighter than four of those fashionable but mostly feeble hipster-cyst silicone £10 lights put together, and it should last longer considerably longer too. The Flare is hard to beat if you want the maximum visibility and maximum versatility for taking off when you nip in to the shops/pub/gym on your ride home, or for swapping between bikes. So the Flare suddenly seems like good value. More importantly, it really is a bright and effective rear light, the sharp pinpoint of red and the flood of light on the tarmac giving you a real presence on the road that transfers into a feeling of security and road safety.

Oh, and it's also available as part of a light set with it's Flash front light sibling with either disposable or rechargeable set ups, the disposable costs £75 and about a tenner more for the rechargeables.

Well made, compact, confidence-inspiringly bright, impervious to weather, and easily swapped between bikes

75 lumens coming from a single Seoul P4 LED, producing 9 hrs of continuous light or 22hrs flashing on a disposable battery and a continuous 3 hrs or flashing 8 hrs on re-chargeables. Weighing a slim 44g it's supplied with one bracket and silicon band and a disposable Li-ion battery.

As an easy to fit seatpost mounted bright rear light it did really rather well. The best I've used.